An amateur astronomer from Rosario, Argentina, has accomplished an historic first: capturing the initial moments of a supernova explosion on film.

Superimposed series of images obtained at the moment of discovery. The supernova becomes visible as a faint and rapidly brightening object to the south of the host galaxy, NGC 613.
(Image by Víctor Buso and Gastón Folatelli)

Supernovas mark the cataclysmic ends of certain stars. Astronomers spot hundreds each year, but they're always a little late: No one has ever irrefutably spied the bright, brief moment when the shock wave first bursts out from the star's interior.

That changed on Sept. 20, 2016, as Victor Buso tested his telescope-mounted camera by shooting 20-second exposures of the spiral galaxy NGC 613.

Smith was part of an international team that contributed its expertise, models and observations to analyzing the supernova, dubbed 2016gkg, which occurred about 80 million light-years from Earth.

Their findings appear in the Feb. 22 edition of Nature.

Knowing the characteristics of the supernova during the shock breakout phase helped Smith and his colleagues estimate the star's mass, size and composition.

The star was likely a member of a binary system that stole too much matter from its companion. Such binary systems comprise one of the two main mechanisms scientists believe cause supernovas. 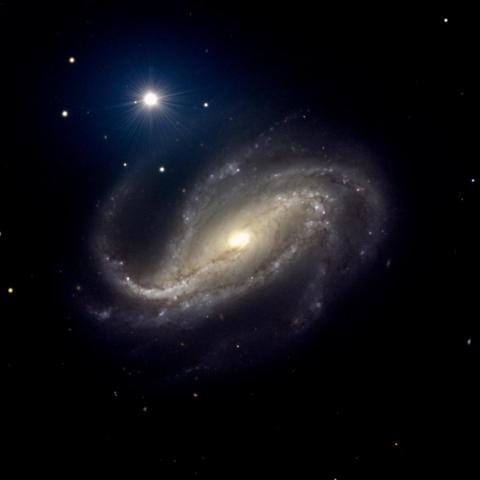 The other type of supernova occurs when a star many times our sun's mass develops a core too heavy for the explosive energy of its internal nuclear reactions to keep in check. The core collapses, then rebounds outward in a shock wave that blows off the star's outer layers.

The moment this shock wave crosses the star's outer boundary, the star flares with astonishing brightness and blasts high-energy radiation, such as X-rays and ultraviolet light, for 20 minutes or so before fading and giving way to a less brilliant, steadier, afterglow.

Astronomers discover supernovas by imaging galaxies by the score and comparing them to previous images of the same patches of sky, looking for changes in brightness — or for vanished bright spots that indicate spent supernovas.

But because these observations occur on a daily or weekly basis, the odds stack strongly against scientists catching a supernova during its initial eruption. Instead, they typically find them during the glow that accompanies their weeks-long expansion.