It's Aliiiiiive! Celebrating The 200th Anniversary Of 'Frankenstein' 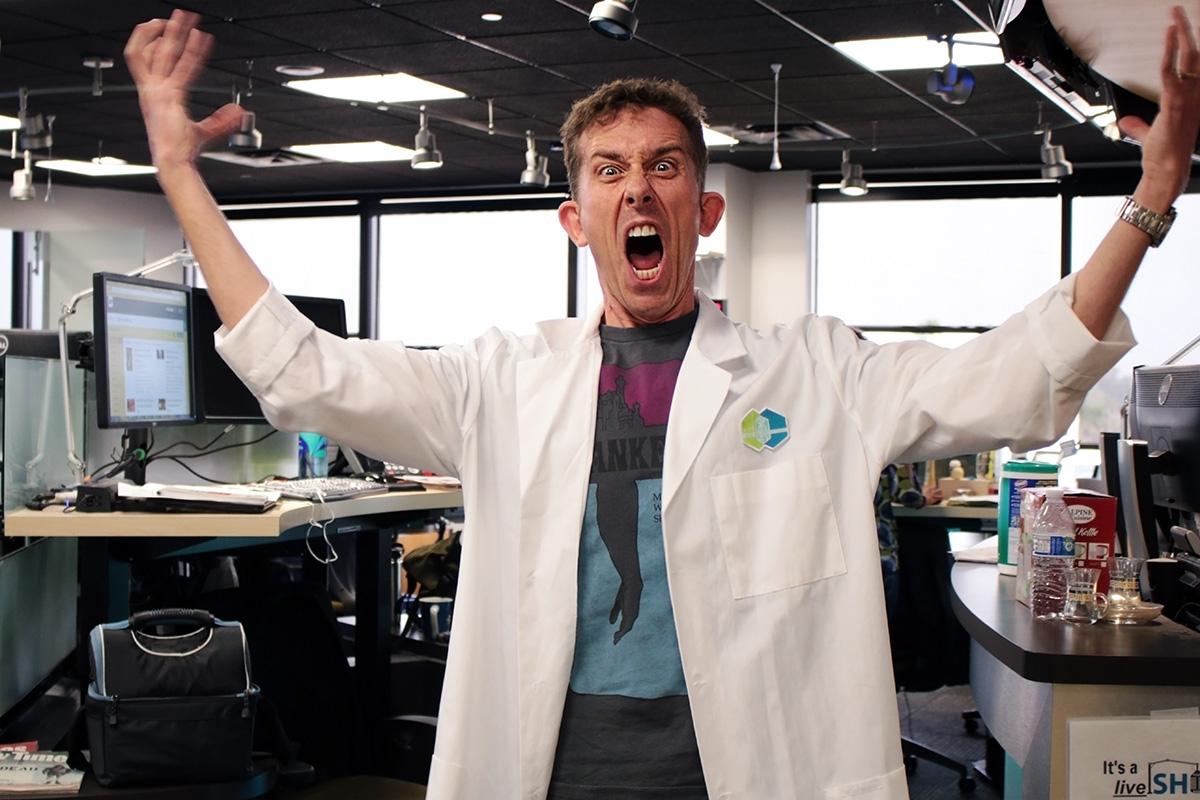 (Photo by Jackie Hai - KJZZ)
Bob Beard from ASU's Center for Science and the Imagination, in KJZZ's studios.

This year is the 200th anniversary of Mary Shelley’s iconic book "Frankenstein." To celebrate, ASU’s Center for Science and the Imagination (CSI) is putting on a series of programs, talks and events, celebrating the book's legacy and considering how it applies to our lives in 2018.

Bob Beard from ASU’s CSI transformed the KJZZ studios into the Laboratory for Innovation and Fantastical Exploration, or L.I.F.E. It is a fictitious lab run by Dr. Victoria Frankenstein — the great, great, great… many greats granddaughter of Dr. Victor Frankenstein.

When Beard arrived at KJZZ's studios, he was wearing a white lab coat and carrying a box of tools and supplies. He did an activity with Steve Goldstein that he typically does with children at places like science museums. The activity involves making a creation, and then thinking deeply and critically about what responsibility one has as a creator and a maker. Who is responsible for creations once they are out in the world? Where does life begin and end? And what ethical concerns are there around making things that have never been made before?

Beard instructed Goldstein to build his own creation. Specifically, he built a “scribble bot,” which is a cylindrical creature made of a foam pool noodle. It has markers for legs that are attached with rubber bands, and an electric toothbrush sticking out the top.

As he built it, Beard began asking Goldstein questions about his creature: What was its personality like? Did it have a name? What did he know about the thing he was building?

Goldstein opted for a nameless orange creature with two googly eyes, giant black fuzzy pipe cleaner ears, and a friendly looking face. Goldstein said he wanted his creature to be happy and smiley.

After this Goldstein attached three “legs” to his creature, which were markers strapped on with a rubber band. Then they shoved an electric toothbrush in the top of it and flipped the switch. The creature began moving on its own!

It drew its own picture while it danced around the page in red, yellow and green. It waved and swirled and made its own picture, without any help from Goldstein.

“If someone came into this newsroom right now and said, ‘This is the most amazing piece of art I’ve ever seen, and I will give the artist one million dollars.’ Who do you think is going to get that money?” asked Beard.

Goldstein jumped in to say that his creature should make the profit, and that it was the one responsible for the work of art.

“So let me flip that around on you,” said Beard. “So if this creature turned itself on and just started scribbling all over the newsroom or all over one of your colleague’s scripts, who would be responsible?”

“The responsibility comes with the creator,” answered Goldstein. “Because I could have influenced this in some other way. I could have held onto it more tightly. I could have done something else. I could have come up with a totally different design. So in that sense as the designer, I’ve determined its fate.”

The whole point of exercises like this is to get kids to start thinking about the intersection of ethics with science and technology, drawing on the big questions and lessons outlined in Shelley’s "Frankenstein" 200 years ago.

Beard said that in many ways these issues are even more relevant today.

Then Beard handed Goldstein a paper with a punch-out paper doll to make his own miniature Frankenstein monster, and an invitation to be a lab assistant for the fictitious Dr. Tori Frankenstein. Goldstein went to the website and signed up, and then received a call from her.

“I wanted to reach out to you personally to tell you how thrilled I am that you’ve registered for the L.I.F.E. experience,” said Dr. Frankenstein over the phone. “Just by taking this simple step you’ve shown yourself to be a curious, forward-thinking person — just the type we’re looking for…”

The program that Dr. Frankenstein spoke of was created by Beard and a team of people, and is called an ARG, or alternate reality game. An ARG is a game that looks and feels real, and sometimes you might not be able to tell when it is or isn’t. It uses transmedia storytelling, which often includes phone calls, using the internet and problem-solving in real life all mixed together. The Frankenstein L.I.F.E. experience is one of those, and is really trippy. Like the scribble bots activity, it forces you to think through your responsibility as a creator.

On the benefits of working in a mixed reality experience:

“Our learners today, our young people have been raised in these immersive story worlds like Harry Potter and the Marvel Cinematic Universe where they're expected to put the various pieces of a story together by crossing different platforms, and going different places, and collecting these ideas, and then putting them together and assembling them in a very Frankensteinian way. And so that's really the heart of this experience is do activities at a museum, do activities in your own home, guide your own learning, and then come back to this academy and find out what you've learned.”

On the legacy of Frankenstein and why it’s important to ask kids the big questions:

“Frankenstein is a 200 year old story, but I think its themes are even more relevant today. We're in a moment where we have access to tools and technologies to change the world in really big ways. You have high school students doing synthetic biology competitions, and there are libraries and maker spaces that have robotics workshops. So I think in a way we're sort of playing the long game, and we're implanting these themes in our younger audiences. And so once they move in their educational journey and they start building these things, or even participating substantively online, they're already considering that these things don't happen in a vacuum. That they have a responsibility for the things they're putting out into the world. Whether it's a robot or it's a post on social media.”

Laboratory for Innovation and Fantastical Exploration (L.I.F.E.) experience
Frankenstein Bicentennial by ASU's Center for Science and the Imagination