An amateur astronomer has picked up signals from a satellite NASA gave up for dead more than decade ago.

Scott Tilley was scanning the skies for secret military satellites when he picked up a transmission from the Imager for Magnetopause-to-Aurora Global Exploration (IMAGE) satellite.

“Every once in a while, the universe gives you a gift, and this one, I think, is ours,” said University of Arizona’s Bill Sandel, team lead for one of IMAGE’s instruments, the Extreme Ultraviolet Imager (EUV).

Sandel, a retired senior research scientist at UA’s Lunar and Planetary Laboratory, has continued to analyze IMAGE data, but admits that work has slowed down recently.

All that could all change if NASA succeeds in restoring the satellite’s functions and reactivating its instrument array.

IMAGE launched in 2000 to map the Earth’s magnetic field — and the charged particles it contains — on a larger scale than was previously possible. After a successful two-year run, NASA extended its mission. Then, in 2005, the space agency unexpectedly lost contact with the craft.

The IMAGE failure review board hoped that the solar-powered satellite would reboot on its own if it spent enough time in Earth’s shadow to drain its batteries. But when a 2007 opportunity came and went with no signal, the agency declared the satellite lost.

It is now clear that IMAGE has been transmitting since at least October 2016, and possibly earlier. NASA is still trying to piece together what happened, but for now it appears that a reboot did occur at some point after 2007.

NASA’s Goddard Space Flight Center in Greenbelt, Maryland, confirmed the satellite’s identity after using five antennas from the Deep Space Network to acquire its radio signals and checking them against IMAGE’s expected characteristics. 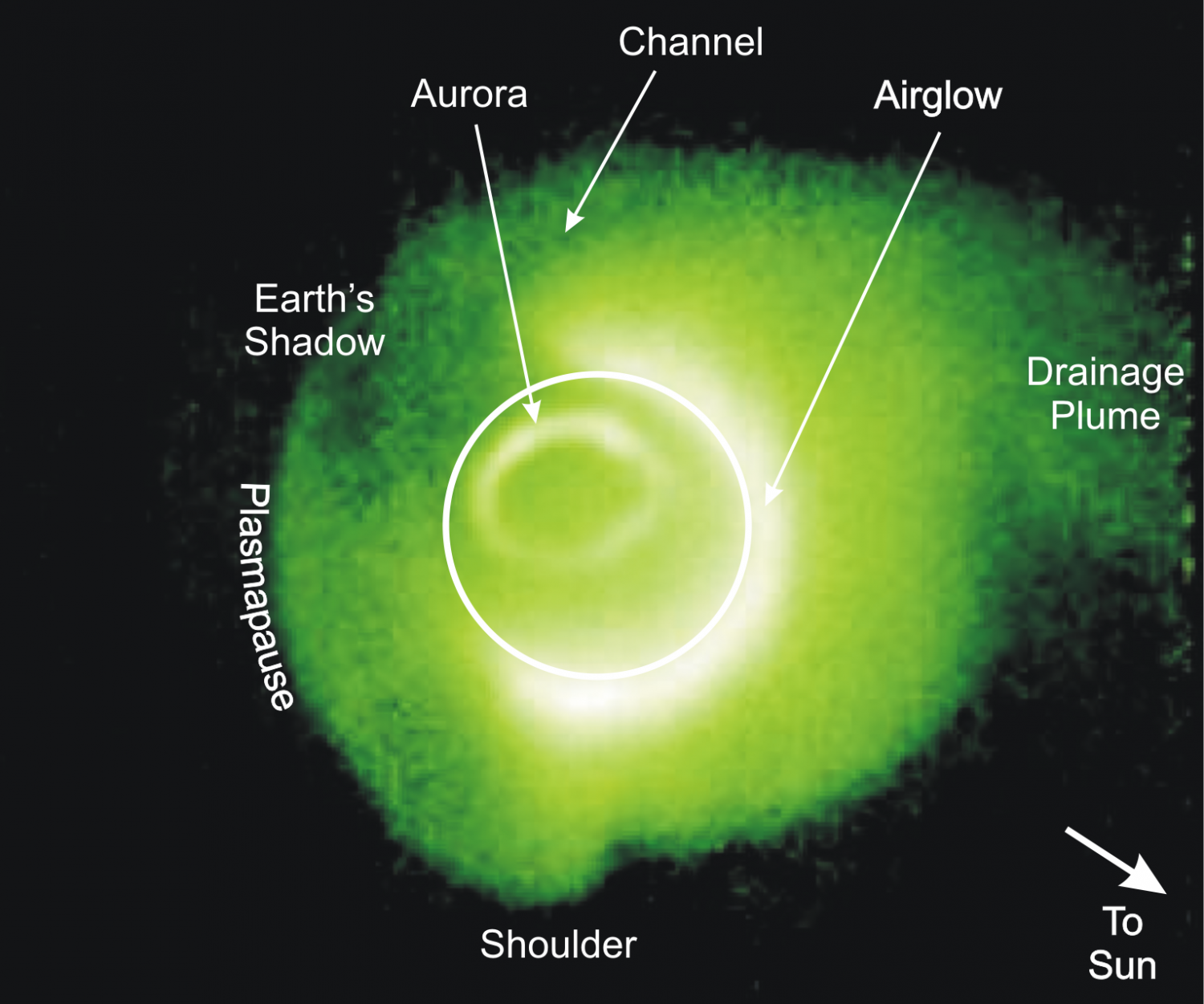 (Image by B. R. Sandel and the IMAGE/EUV team)
Earth's plasmasphere, as seen by IMAGE's Extreme Ultraviolet Imager on May 24, 2000.

Subsequent tests have revealed that the craft appears to be in good shape, and that its battery is fully charged.

Engineers will next test whether IMAGE can receive and carry out commands — that is, once they recreate the 12-plus-year-old software and find a machine that can run it.

“Then we’ll be in a position to think about restarting the science payload, getting the instruments up and running again, and making a new set of observations,” said Sandel.

At stake is a better understanding of the magnetic field that surrounds the Earth, shielding the planet from solar wind and cosmic rays. Within its confines lies the plasmasphere, a doughnut-shaped region roiling with a gaseous soup of charged atoms and molecules known as plasma. This plasmasphere starts at Earth’s upper atmosphere, where solar radiation ionizes atmospheric molecules in the ionosphere.

Improved knowledge of this complex, coupled system would answer basic scientific questions and potentially improve radio communications, GPS accuracy, satellite lifespans and other factors affected by the ionosphere, the magnetosphere, or the Van Allen radiation belts.

Prior to IMAGE, satellites studied the Earth’s electromagnetic environs by flying through them, their detectors providing data for wherever they passed through, whenever they passed through it. Such snapshots limited the conclusions scientist could draw, since a change in a reading could be chalked up either to the passage of time or a change of place.

IMAGE expanded upon that research by proving a more comprehensive view.

“The secret is to use imaging to record the state of the entire system at once, and then to continue looking over long periods of time so that, instead of making a measurement at a single point in space, you measure simultaneously the whole system,” said Sandel.

Sandel’s EUV instrument photographs helium ions in far-ultraviolet light. The wavelength at which these ions scatter sunlight, 30.4 nanometers, is about one-tenth the size of what the human eye can detect.

Because these ions populate the plasmasphere, imaging them provides a picture of activity within.

“It shrinks and contracts and changes on time scales of a few hours, in a very dramatic way," Sandel said.