(Photo by Sarah Ventre - KJZZ)
Most people who pass through Dateland will recognize the shop where you can buy date shakes, and many other types of sweet treats made from dates.

To commemorate Arizona’s birthday, we dispatched our reporters far and wide to bring you stories from the region you've probably never heard before. Hear more from our Untold Arizona series.

If you have ever driven to San Diego in the summer, chances are you have stopped in the unincorporated town of Dateland. At the very least, you have seen billboards for the travel center’s “world-famous date shakes” in the tiny town of Dateland.

It consists of date groves, an RV park, a travel center, a school that has a post office housed there, a few homes and an out of use military training airfield.

Roland and Charna Walker are the owners of Dateland. They moved there from Calgary, Alberta and knew about the small farming community because Roland Walker’s parents came to the Southwest as snowbirds.

One day, they saw on the news that you could buy the whole town ... sort of. It was advertised that way, but it is a small enough place that buying up a few properties, including its namesake date groves, is enough to have essentially bought up the whole thing.

Charna Walker is credited with branding the date shakes “world famous,” and for marketing the town and its sweet fruits. 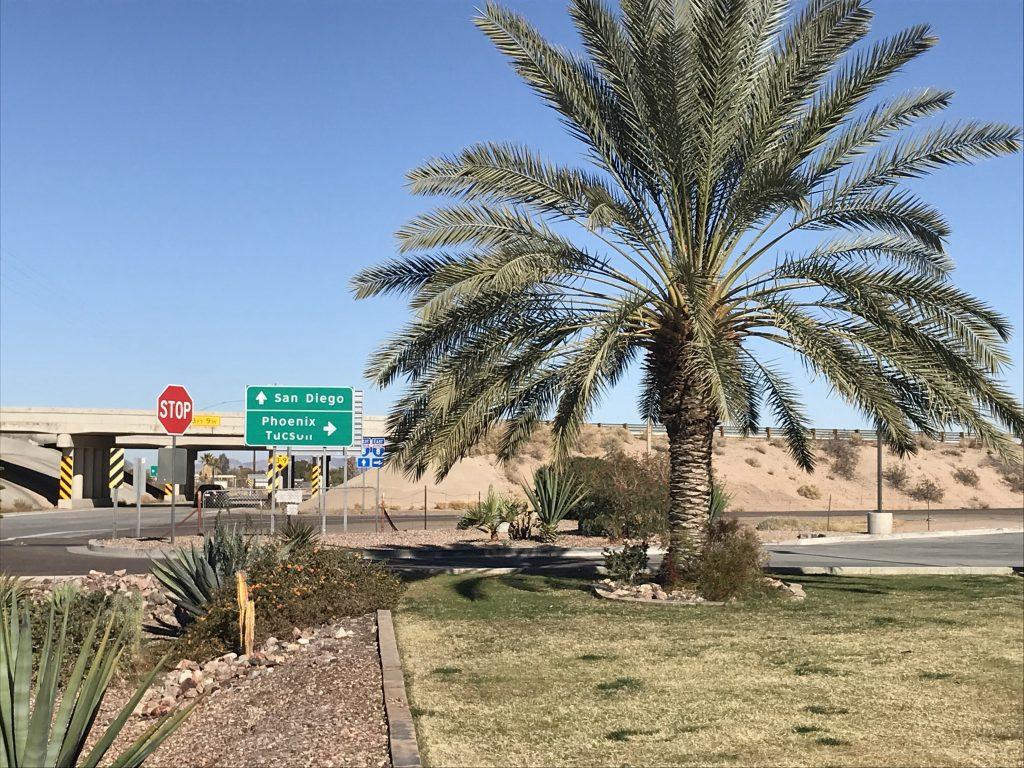 (Photo by Sarah Ventre - KJZZ)
Dateland sits on Interstate 8 between Phoenix and San Diego, and has become a popular stopping point for travelers making the drive.

“I've had people from Germany, from Australia, from Russia and Canada. It's amazing how many people have heard of Dateland,” said Charna Walker.

And those sweet fruits are really hard to grow.

Andrew Costanza works for a company that manages the farm in Dateland. At this time of year, the dates aren’t growing, but the farmers are prepping the palms.

“Our first tree operation is to remove those thorns." Constanza said. "That way you can because the flowers are going to come out that we have to pollinate in the middle of the crown."

The date palms have these long fronds with thorns on the end. They almost look like the tips of an agave, but longer. Costanza said they are so sharp they’ll puncture your shoes, or even a truck tire.

“And the problem is, if you get this in and it breaks off it's like a fishing hook it'll keep going if you keep on squeezing, it don't go away,” said Costanza. “And it's sort of coming out and you have to remove medically both the doctor.”

Like a lot of people in Arizona, these palms are not native to the Southwest. They were brought into the area from Morocco in the 1920s, and there really is no machinery used to cultivate and harvest these dates. Dethorning, pollination, picking - all of this is done by hand.

There are hundreds of varieties of dates, but the most prized one is the medjool.

“It's just a sweetness. It's plump. It's actually a good fiber. It's just a tasty fruit," said Costanza.

Besides the date groves, Dateland used to be the site of a military airfield. And just outside of town were camps that allowed the military to train in harsh conditions during World War II.

Some people say that Dateland was once home to an Italian internment camp, though KJZZ has never been able to find the records to prove it.

For most tourists, these sites fly under the radar. Instead, the big attraction is in the travel center, where customers browse T-shirts and tchotchkes, and look through all the different kinds of dates.

Even though most varieties of dates make a perfectly fine snack on their own, Roland Walker has found plenty of uses for them.

“A couple of years ago I developed a date steak sauce, a date barbecue sauce, date-raspberry jam, date-strawberry jam, date butter, and we make our date shake mix in a jar so you can take a jar home,” said Roland Walker.

That is in addition to cookies, breads, muffins, pies, and oatmeal.

But on that desolate stretch of Interstate 8 between Phoenix and Yuma, when the hot desert sun beats through your windshield, not much beats the cool, sweet taste of a date shake.