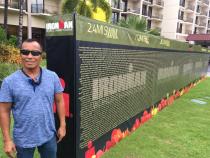 The IMAZ, as it’s called by competitors, is a grueling 2.4 mile swim in Tempe Town Lake, followed by a 112-mile bike ride that extends into the Sonoran Desert and finishes up with a marathon around the lake and Papago Park.

It’s the ultimate test of endurance no matter who you are. But what if you had to compete in this battle of body and willpower and strength — without being able to see?

You’ve heard the expression “when life gives you lemons, make lemonade” Well, Gilbert’s Michael Somsan has been handed a few lemons in life. Back in 1995, the Hawaii native was a first lieutenant in the Army with a bright future.

But while visiting Austin, Texas, a brawl broke back at a friend’s house. He intervened trying to defend his buddy when things quickly escalated beyond fisticuffs.

“They went back and got weapons. And one of the persons came out with a shotgun and shot me while I was in my car," Somsan said.

Somsan managed to survive the gunshot wounds to the head. But not without permanent damage.

“My optic nerves were severed, and I have no vision," he said.

Faced with a sightless future, Somsan faced his new reality head on. He convinced the University of Arizona’s College of Law to accept him, then studied and passed the bar exam using audio tapes.

That amazing mental accomplishment aside, Somsan felt he needed to address his physical side. So he started entering Ironman competitions.

While he has competed in the IMAZ before, he’s chosen to skip this year’s event to train for the famous Ironman World Championship in his native Hawaii next year.