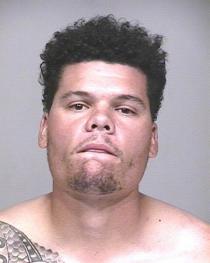 Oakland A’s catcher Bruce Maxwell is making headlines in the postseason even though his team is not playing in the World Series.

Maxwell was arrested and booked Saturday night by Scottsdale Police on felony charges of aggravated assault with a deadly weapon and disorderly conduct involving a weapon.

According to the police report, Maxwell placed a delivery order from Geno’s Pizza and Cheesesteaks. When the driver knocked on his door, he opened it and pointed a handgun at her head.

Appearing in Superior Court of Arizona for Maricopa County on Saturday with Maxwell, attorney Michael Kimerer asked Judge Utiki Spurling Laing to reduce initial pre-trial restrictions because Maxwell has never been in trouble with the law.

“I would ask that the restrictions be less than what you suggest at this time," Kimerer said. "I think if it’s house arrest, which is what you’re indicating with the ankle bracelet, it’s going to keep him from doing some activities which are very valuable and which are very important in terms of the community.”

Maxwell’s next appearance is scheduled for Nov. 6 in Maricopa Superior Court in Phoenix.