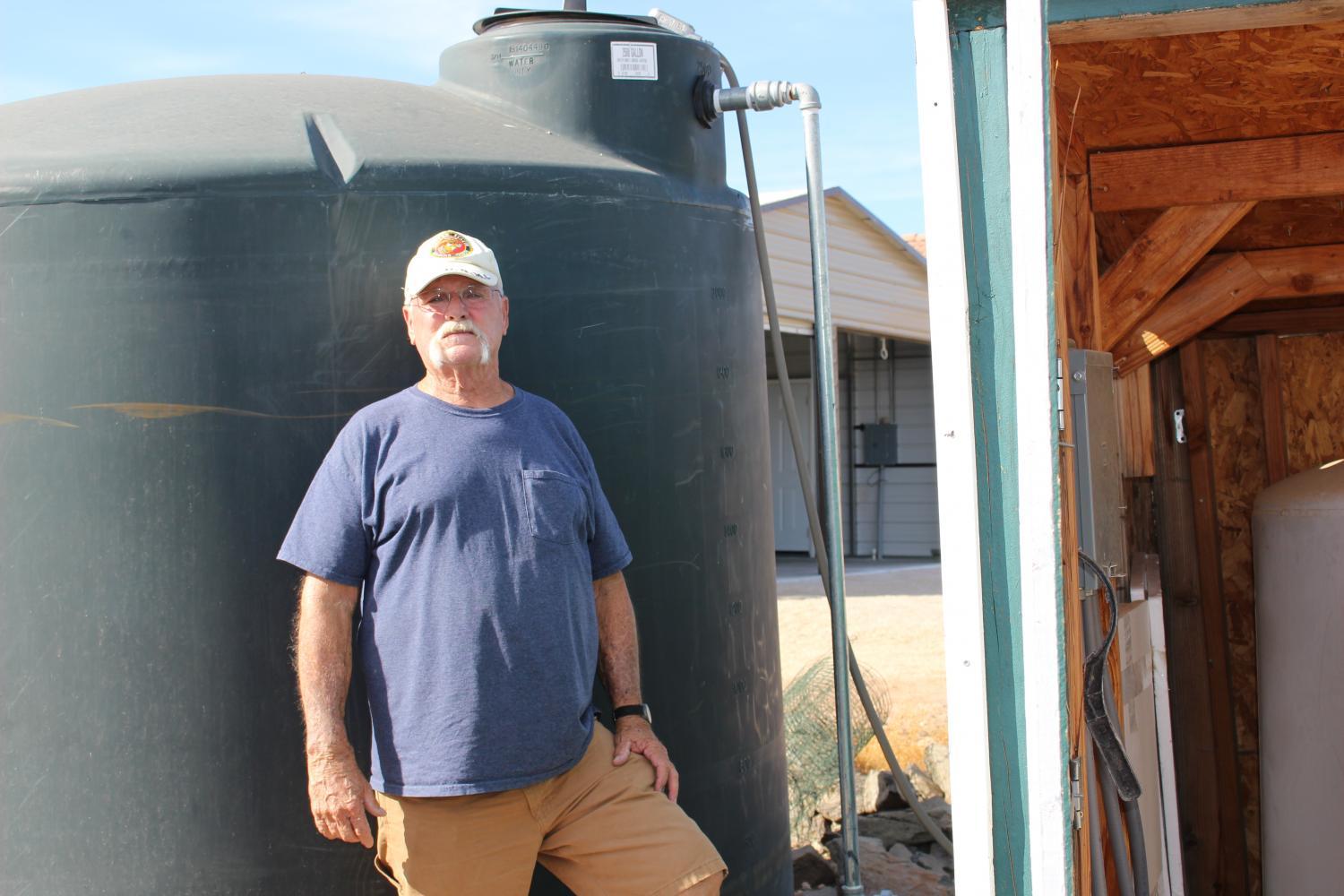 (Photo by Bret Jaspers - KJZZ)
Don Reeves stands in front of his 2,500 gallon water storage tank. He installed it after his well started to run dry.

Don Reeves’ well house has certainly seen better days. The door is rather loose on its hinges.

“We had to lay it over on its back to deepen the well,” Reeves said. “Kinda beat it up.”

Reeves, a New River resident, had to deepen his well when it started to run dry about five years ago. At about the same time, he installed a big, blue-gray tank next to his driveway. It stores 2,500 gallons, usually a combination of well water and hauled water.

Hundreds of New River and Desert Hills residents currently have their water hauled in, but with the city of Phoenix cutting off haulers to those communities at the end of the year, that source is at risk, too.

They are now hoping a temporary fix to their water worries will come before the end of the year. And though there is a solution in the offing, residents are also thirsty for a long-term solution.

“The short term issue is gonna be solved, hopefully, by the water company from Anthem,” Reeves said.

Anthem is a neighboring community. It buys its water from the utility EPCOR.

The solution now on the table is for EPCOR to lease an acre of property from Anthem and set up a station that haulers to New River and Desert Hills can tap into. Haulers would have a new pickup place, and, according to EPCOR, pay about the same price.

The deal isn’t final, though. The Anthem Community Council board will be deciding on a lease next month.

At a recent meeting of the Anthem board, the urgency of the problem was palpable. The New River residents in attendance were grateful for the last-minute lifeline being considered by EPCOR and Anthem.

Many parties in the room, however, yearned for a permanent solution. Some worried a new hauling station would simply feed more development.

“If you’re going to do this, could you make it current residents only, because you’re worried about how much you’re going to be supplying?” said Ron Bentley, a New River resident. “Because they just continue to want to develop.” 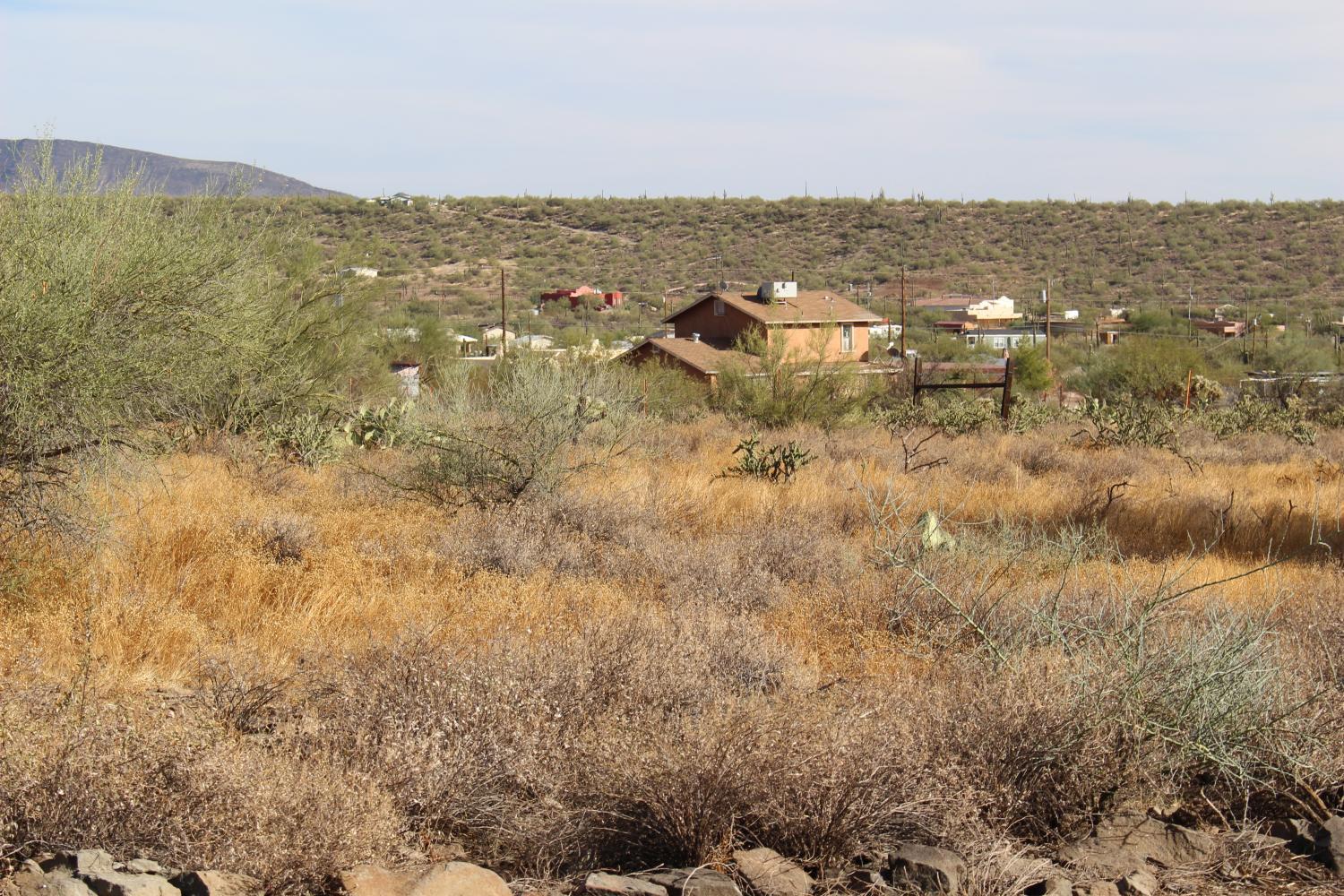 (Photo by Bret Jaspers - KJZZ)
New River has about 15,000 residents, many who get water hauled in from outside sources.

Arizona does have a water rule for developers: New subdivisions must have a hundred-year guaranteed water supply. That state rule, though, doesn’t apply to groups of five parcels or less, a category that residents say includes a lot of New River homes.

Bentley and others want some way to stop new homes from popping up.

It’s not clear that a utility like EPCOR could exert control over who the haulers sell to, even if it wanted to.

The Arizona Corporation Commission regulates utilities, but a spokesperson said it only looks at the price of the water sold at the station - not who’s doing the buying.

Bill Gates, a Maricopa County Supervisor whose district includes New River, said the County can’t change the subdivision rule.That’s a state decision. It’s not a decision we can make at the County level.”

Even with a prolonged drought, not every New River well is running dry. It depends heavily on where your house is. Don Reeves said he was surprised the first time his well ran dry. Not anymore.

“When you put so many straws into the same glass, sooner or later the level starts dropping,” he said.

Reeves and his neighbors are grateful there may be another glass to drink out of. For now.