Thousands Turn Out For Lost Lake Festival In Phoenix 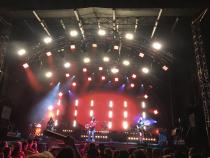 Thousands of Valley residents have come together this weekend for a first-of-it’s kind music festival.

The three-day Lost Lake Festival at Phoenix’s Steele Indian School Peak features a diverse lineup of nearly 50 musical acts mostly from the world of hip-hip, rock and roll and even some Arizona-based indie bands.

“I moved here 11 years ago and I’ve never seen anything like this in the middle of Phoenix at this gorgeous park and it’s just been amazing," said Driessen.

Run The Jewels, Major Lazer and Juanes headline Sunday's final day of the festival, which so far has been incident-free.