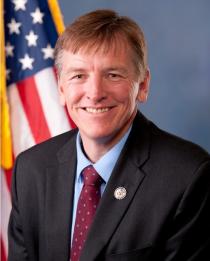 Arizona congressman Paul Gosar is accusing a liberal activist of conspiring with Nazis, hinting George Soros was behind the white supremacist rally in Charlottesville that turned violent this summer.

The Republican, who represents the state’s 4th district, was on HBO’s Vice News on Thursday responding to criticism from constituents who say he has blocked their negative comments on Facebook.

Gosar maintained he had the right to block them from his public page because of threatening language used in posts, citing the attempted murder of fellow congressman Steve Scalise.

“Intimidation by any shape or form from what I’ve seen, and the definition of bullying, I think. You know, words seem hurt people these days,” Gosar said.

When the conversation turned to violence at the neo-Nazi rally in August, Gosar blamed left wing activists for inciting it, and then linked the liberal billionaire investor.

“George Soros is one of those people that actually helps back these individuals. Who is he? I think he’s from Hungary. I think he was Jewish and I think he turned his own people into the Nazis,” Gosar said. “We have to be very careful about where we go with this.”