Competition for jobs has led state and local governments to offer financial incentives to companies looking to move or expand. While supporters say offering tax credits and even cash is necessary, others worry deals for corporations could hurt the state in the long run. Our series “Phoenix at Work” wraps up with a look at what government is doing to create quality jobs. 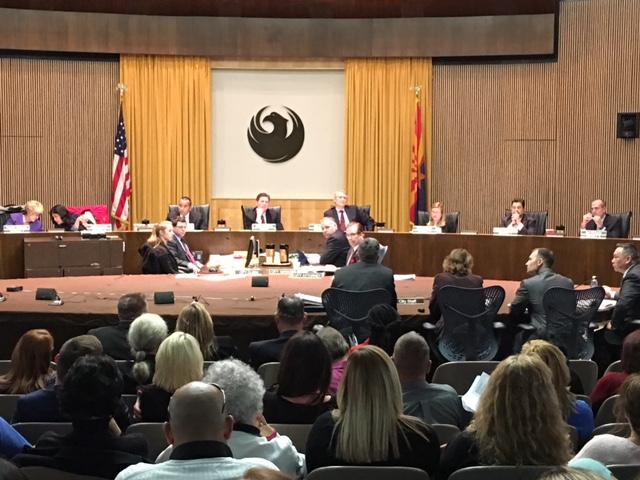 The competition to get Farmers Insurance to expand operations in Phoenix was so strong the city created a code name: Tiger.

“I was sworn to secrecy and crossing my fingers,” said Councilwoman Thelda Williams

She uncrossed her fingers and shared her feelings when the City Council approved a deal with the insurance company last year.

“Over 1,000 new jobs plus construction is very exciting,” Williams said just before the unanimous vote.

Farmers agreed to build a new operations center at Interstate 17 and Pinnacle Peak Road in Williams’ council district. In exchange, Phoenix will pay the company up to $500,000. It breaks down this way: Farmers can get $1,000 for each net new employee who makes more than $44,000 per year in their first or second year of employment.

When the ribbon was cut for auto financing company Santander’s customer service center in Mesa’s Fiesta District, leaders announced plans to hire 970 people over three years. If they do, Santander could be eligible for $8.73 million under the state’s quality jobs tax credits program.

It’s not tax credits, but checks that ZipRecruiter, an online job portal, could collect. To convince the California-based company to expand to Tempe, the Arizona Commerce Authority offered ZipRecruiter $500,000, courtesy of taxpayers.

“It was a competitive process and we were competing against several other states,” said Sandra Watson, president and CEO at the Arizona Commerce Authority.

She said money from the Arizona Competes Fund helped close the deal with ZipRecruiter which has hired more than 200 people.

“Our focus has always been on job creation, but quality job creation to ensure that the wage levels of the jobs that the businesses that we’re working with are creating are really at a much higher level,” Watson said.

To qualify for Arizona’s quality jobs tax credits, a job in Maricopa County must pay more than the median salary of $35,760. But the Commerce Authority says its wage goals are higher. Over the past five years, the group says it’s helped land 87,132 projected jobs with average projected salaries of $52,577. Companies supply information to the Commerce Authority based on three-year projections.

“We really focus on the total value proposition for companies,” said Kevin Sullivan, senior vice president for business attraction and expansion at the Arizona Commerce Authority.

“While the incentives are important, they’re not paramount,” he said. “I mean many companies are making their decisions based upon the talent that we have, the affordability of buying a house, the quality of life. So, those are things that I think sometimes get lost in discussion.”

Broadening the discussion is what David Lujan would like to do. He runs the Arizona Center for Economic Progress which launched earlier this year.

“Our mission is to advocate for those policies that are going to create better jobs and economic opportunities for all Arizonans,” he said.

“I was in the Legislature for a number of years and it often seemed that when budgets were passed it was based on what was going to help get us out of this current crisis for that particular year," said Lujan. "And, rarely do you see state lawmakers making decisions based on what’s our long-term plan? What’s our long-term strategy to grow quality jobs and to grow our economy?”

He worries Arizona is falling behind.

“In recent years, Utah and Nevada have made significant investments in public education and in Utah, also in infrastructure, because they see those two areas as key to creating quality jobs in their states,” he said.

For the past two years, Alliance Bank of Arizona has surveyed business leaders and in both years, workforce quality and education topped their list of concerns. Last fall, Arizona voters approved more funding for public education and raising the state’s minimum wage.