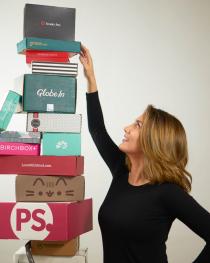 If you were around when Michael Jackson wanted you to “beat it” and Blondie wanted you to call her, you might also remember the Columbia Record and Tape Club. It was a mail-order service that would send stacks of records or tapes to subscribers every month. It’s just a memory now, but subscription services are more popular than ever before for virtually every aspect of retail.

There are services for razors, makeup samples, Japanese import snacks and socks, all delivered to doorsteps across the country.

I might be one of those weird Millennials who has never signed up for a monthly subscription box. So I went to someone I know who does get one …

“OK so, I am a cat person, so it should be no surprise that I get the cat-lady box,” Kaely Monahan explained to me as she cut the tape on a brown cardboard box.

Besides being a cat person, Monahan is a coworker of mine.

“And it’s I guess it’s the deluxe version because it comes with stuff for me and my cat,” she laughed.

Things like an umbrella with a cat face on it, a T-shirt that says “You had me at meow” and a couple cat toys. All the items are a surprise to the subscriber. It’s like opening up a gift you’ve sent yourself — and in this case, also your cats.

“And bonus, you know cats and boxes — they like to sit in the box afterwards,” Monahan said.

So really, it comes with three cat toys. But is there a point where you max out on cat items? Monahan felt like she’d already reached that limit.

“I’m like, OK, this has been fun for the last few months, but I’m probably going to cancel and not spend the money on it,” she said. “Because it is fun, but it kind of loses its luster after a while.”

And that explains one of the toughest challenges in the subscription box industry.

“The key is still, like it has always been, having a selection of products that are going to be interesting on a regular basis,” said John Fetto, a senior analyst at Hitwise.

He looks at retail data, and he’s been following the subscription side for a few years by tracking how many people visit the top 270 subscription box websites, including Stitch Fix, Dollar Shave Club and Blue Apron.

Fetto said in the past  three years, they’ve seen visits to those websites soar; there were 37 million visits in May alone. And certain categories are having a shining moment. The pet sector is way up from last year. The food sector is also climbing.

Subscription box websites snag about 1 percent of all web traffic to retail brands. That means people are still visiting traditional retail websites a lot more, but 1 percent is nothing to sneeze at. Traditional brands have certainly noticed the subscription model, Fetto said, because they’ve started to follow suit.

Walmart, Target, Amazon — they’re all in the game now. So will the market stay unique, or will these boxes turn into miniature versions of the same stores you find around your local shopping complex?

“You know the subscription industry really is very much still a startup space, and you still see a lot of one-, two-person companies that are trying to carve out their specific niche in the market,” said Liz Cadman, who has made a full-time job out of opening these boxes and reviewing them on her website, My Subscription Addiction.

And many of those are still what you’d call “the little guys.” They can’t compete with Walmart  or Target, but maybe they have an item or two that you really can’t get anywhere else.

“In some sense because they’re small, they’re able to work with these other makers that might not have been able to fulfill orders for a subscription box that’s shipping 100,000 boxes. But something under 10,000 they can do,” Cadman said.

In fact, subscription business owners like Jennifer King have brands contacting them to get in the box. King started Daisy Bee in the Valley. It’s a tiny operation — King ships out boxes from her own home for moms-to-be and new moms. And those boxes often have items from other really small sellers.

“I mean if I made a physical product, I would gladly sell somebody 100 of them,” King said. “From that point of view, it’s just probably easier for them.”

So she said finding items isn’t the problem. But she’s wary of how long the subscription trend will hold. How long will customers want to receive surprise items for their baby or dog or shoe collection? And what about the items they don’t want to keep?

Within that puzzle is of course another business idea — this one from Cadman, the box reviewer.

“We actually built out a swapping platform on our site,” Cadman said. “[It’s] similar to EBay in that you list out all the products you have, and then you can go swap with your fellow subscribers.”

Thus ordering a box of someone else’s subscription box leftovers — and maybe keeping the trend moving.