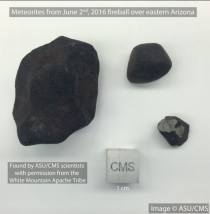 Last June, a big ball of light shot across the early morning sky and was seen over many areas of the Southwest.

The meteor was seen and reported by many in Phoenix, but it actually fell on the White Mountain Apache Indian Reservation.

And after collecting samples from the area and taking them back to the lab, scientists from Arizona State University’s Center For Meteorite Studies were able to look at them more closely and found what they had was, in scientific terms, a LL7 meteorite.

According to Dr. Laurence Garvie at ASU, that makes it really rare.

In fact, according to the the Meteoritical Society, only 50 with that classification have been identified in the world, and this is the first in North America.

“So now comes the really only interesting scientific sort of endeavor. We’ve just begun to explore what this is telling us about early solar system history,” he said.

And the meteor is showing that it had an interesting history during it’s time in outer space.

“And this one in particular seems to be telling us about high pressure impacts. But then, something very odd happened. We don’t know what, yet. Cause when we look at this thing under the microscope there’s things we haven’t seen before, that I haven’t seen before."

And because of how special the meteor is, Garvie said they wanted to give it an interesting name.

He said most meteors are named for the region or city in which they're found. But because the meteor was discovered near Cibecue, on the reservation, they decided to give it a more traditional name.

“The traditional Apache name for Cibecue is Dishchii’bikoh. So, that’s going to be the name that’s most likely going to be used in most publications.”

But then, they added to that name. It’s full name, in English, is Cibecue Star Stone, which translates to Dishchii’bikoh Ts’iłsǫǫsé Tsee.

“So it’s a name that represents the name and the culture into which it fell,” Garvie said. “So, it really is a fascinating name.”

The official report on the Cibecue Star Stone was released Monday.

Garvie said in that short amount of time, and because the sample they have is so rare, many of his colleagues from around the world have shown an interest.

“You know, many people have their own area of expertise, we’re not all experts at everything,” Garvie said. “So, I will let little pieces of this go to my colleges around the world to do their own little investigations on.”

Garvie hopes their finding will eventually lead to a larger consortium study to bring together all the information to find the real story behind the meteor’s history.

He said he looks forward to studying the meteorite in the future because there are many different special aspects to it. He’s said they were also lucky enough because it fell in their own backyard.