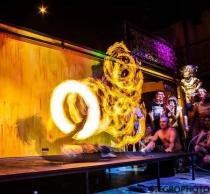 Comicon is taking over downtown Phoenix this weekend, and for the first time, so will the Phoenix Cosplay Ball. Scorpius Dance Theater is joining with the Festival Fashion Show to put on an event that’s full of dance, music, fashion and, yes, elaborate costumes.

It’s a dance show and a fashion show, but all of the models will be real people, in other words “role models” as opposed to fashion models. And, as emcee Samuel Morgan Wiseman puts it, for this event, think Disney meets Burning Man meets World of Warcraft.

Wiseman sat down with The Show to talk more about this, and started by discussing the Cosplay Ball's connection to Comicon, and the superheroes celebrated there.