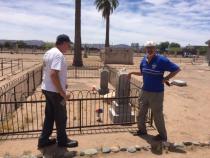 For a 34th straight year, a solemn celebration takes place at one of Phoenix’s most historic and sacred sites, Pioneer and Military Memorial Park.

Memorial Day is traditionally marked at the site of a pre-Columbian Hohokam community, home to seven separate cemeteries recognized on the National Register of Historic Places.

Pioneer is the final resting place for hundreds of military veterans and thousands of some of the region’s earliest residents and luminaries dating back to 1884, including the man known as the "Father of Phoenix," William Augustus Hancock and Arizona’s former territorial governor, Benjamin Joseph Franklin.

Sterling Foster is a Vietnam-era Air Force veteran who serves as a volunteer for the non-profit that maintains the park. He said many of the residents were buried here before any national
cemeteries were built in the West.

Of the estimated 3,700 burials at the park, only about 600 graves have headstones. Foster and fellow volunteers with the Pioneers’ Cemetery Association are working to restore headstones and gravesites that have fallen into disrepair.

“Somebody’s gotta do it,” Foster said.

MORE: Did You Know: Pioneer And Military Memorial Park A Territory-Era Cemetery

In fact, for nearly 70 years, nobody was doing it.

In 1983, the association was formed to take care of the cemeteries, and volunteers do the restorations with the help of donations.

Air Force veteran Mark Lamb serves as the association’s Vice President and has become an expert at headstone repair.

“They’ll deteriorate. Pieces get distributed out, and we lose them,” Lamb said as he pointed to one of the gravesites. “We need to maintain them because they tell history.”

Foster hopes his group can raise awareness of the significance of the burial site.

“A lot of people probably didn’t even know this cemetery was here, and this was the first opportunity for them to see it when they saw we were having a Memorial Day celebration," Foster said. "It’s a way of introducing the history of Arizona and history of Phoenix to the public.”

The 1897 Smurthwaite House and Museum, also on the list of historic places, serves as the cemeteries’ main office. It’s located at 1317 West Jefferson St. and is open to visitors on Thursday.