Tracy Greer
Phoenix Comicon attendees react to the prop weapon ban on May 26, 2017. 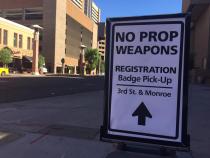 Phoenix Comicon is underway at the Phoenix Convention Center and that means big crowds — last year’s attendance topped 100,000 people — but along with that come security concerns.

Officers say a person who became aware of the online threats alerted the police of the potential problem.

“That person knew that those posts could be credible and immediately alerted law enforcement and prevented a tragedy. We talk about always, you know, our message of ‘See something, say something.’ And this is a great example of that," said Phoenix Police Sgt. Mercedes Fortune.

On Friday, Sterling was charged with three counts of aggravated assault with a deadly weapon, wearing body armor during the commission of a felony, resisting arrest and carrying a weapon in a prohibited place.

The incident has resulted in new, stricter Comicon policies. The convention will now only have three entrance points, only visitors with badges may enter and no longer will costume prop-weapons be allowed inside.

Of course, the news that costume requirements were changing was not met with complete enthusiasm by Phoenix Comicon attendees.

Derek Dolley was at event during the arrest of Sterling and reacted to the policy changes. His costume featured a toy gun.

"He was dressed, masked and everything, like everyone else. And this is the time to do it, this is what we want to do. I want to dress up, this is my first year doing it," said Dolley. "In light of the offense, you don’t want that to happen or to have an event like that, or even worse, happen. But at the same time, this is a big part of my costume. This has been a big selling point, when somebody is like, 'Oh, I love your costume!' Like, 'Hey — if you’re going to take a picture, you’ll want to hold the gun.”

Of course, Phoenix Comicon organizers and police say the policy is not about ruining fun, but prudence.

"In this day and age, with everything that’s occurring, I think that we just have to be mindful on the safety of everyone that’s attending this event," said Fortune.