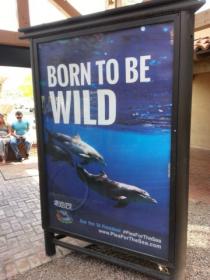 Lauren Gilger/KJZZ
The Animal Defense League of Arizona and anti-captivity group Plea for the Sea took out ads against Dolphinaris.

Dolphinaris, the attraction where you can swim with dolphins in the middle of the desert, has been controversial since it opened near Scottsdale last year.

Protesters gathered at its opening, and more than 170,000 people have signed an online petition opposing the facility.

But the Animal Defense League of Arizona and anti-captivity group Plea for the Sea don’t want people to forget the controversy. They recently took out ads at three Valley malls hoping to discourage people from visiting the attraction.

The ads are big, movie-poster sized ads that show dolphins swimming and say “Born to be Wild … Say Yes to Freedom” and direct people to pleaforthesea.com.

I spoke with Stephanie Nichols-Young, president of the Animal Defense League of Arizona, about this, and I asked her, why go this route and what are they hoping to achieve?

What does Dolphinaris have to say about this?

Dolphinaris says they love animals just as much as those who protest them; they just disagree about how to go about doing that.

I spoke with Dolphinaris spokeswoman Jennifer Smith about this and she says, first of all, the dolphins that they have in their facility were born and raised in human captivity. So they weren’t taken from the wild, and, they can’t be released back into the wild. They wouldn’t survive.

This is a federally licensed facility that follows standards, just like any zoo or aquarium in the United States. And Smith told me not everyone can get to the ocean to see marine life in the wild, and they think the best way they can help the plight of dolphins in the wild is through hands-on education.