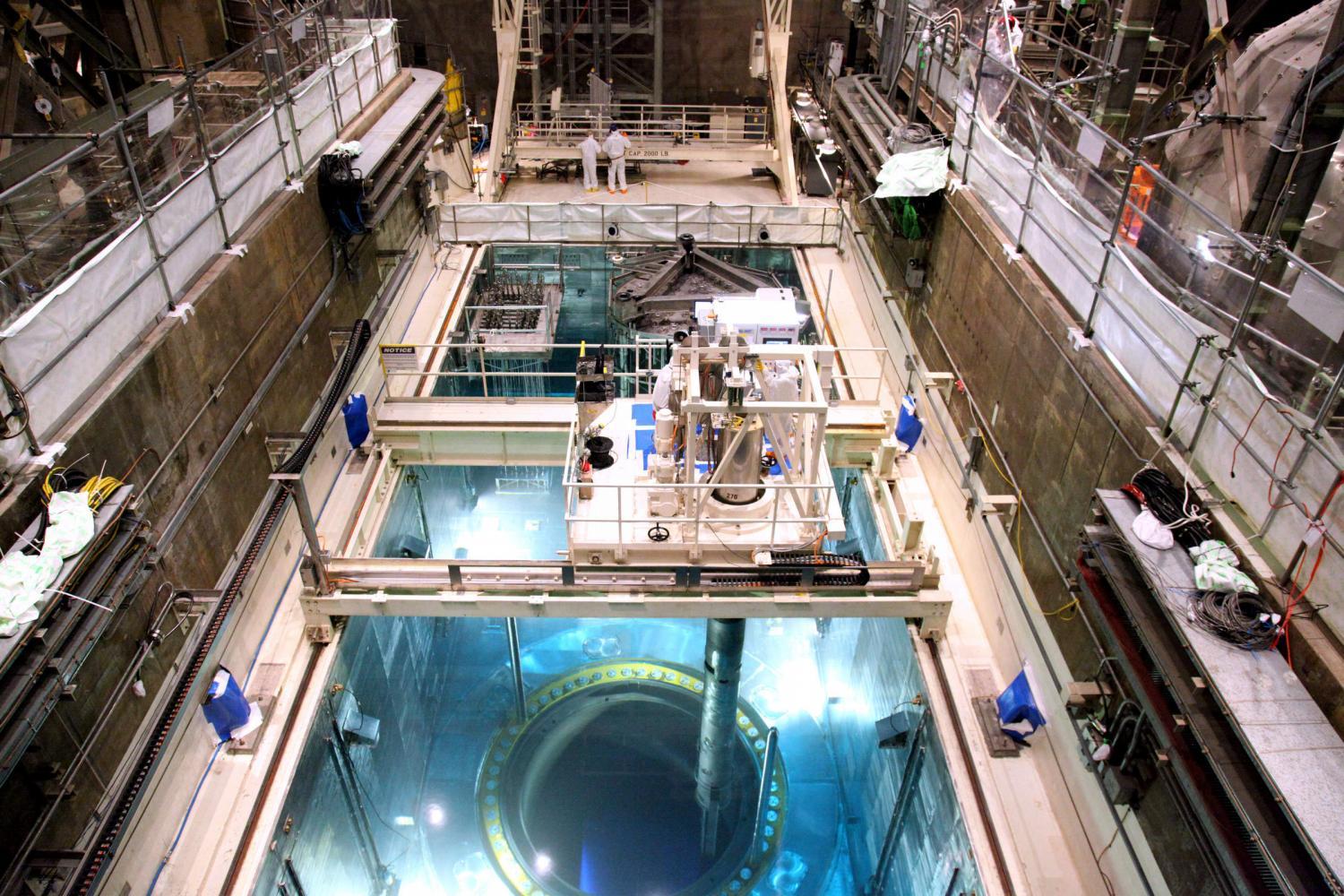 (Photo courtesy of APS)
The deep blue hue of Cherenkov radiation emanates from fuel assemblies within the open reactor core (foreground). Beneath the platform, a tube-shaped fuel handling machine extracts one of these assemblies.

Every six months, Arizona’s only nuclear power plant shuts down one of its three reactors for refueling and maintenance. The Palo Verde Nuclear Generating Station southwest of Phoenix recently underwent the process.

"Get your head in the game."

Those six words, printed on a sidewalk, greet all who enter Palo Verde, whether visitor, staff or one of the 1,000 or so contractors who work around the clock for 30 days to refuel Unit 2. But the advice extends beyond refueling, said director of communications Mark Fallon.

“It’s a huge amount of maintenance and engineering tasks that are associated with making the unit reliable for the next 18 months, once it comes back from that refueling outage," Fallon said.

Unlike gas or coal plants, Palo Verde can’t pipe or haul in fuel. In nuclear plants, the fuel is the heat source. Imagine charcoal briquettes that fire up simply by being piled together, except these “briquettes” are 8-inch-square, 14-foot-tall assemblies composed of uranium-oxide pellets.

“They’re very powerful; a pellet about the size of the last digit of my little finger — actually, mine’s bigger than it is — is equal to a ton of coal, three barrels of oil or 17,000 cubic feet of natural gas in its energy capability,” Fallon said.

Beyond the source of their heat — binding energy freed from uranium atoms as neutrons break them apart, releasing more neutrons in a chain reaction — nuclear plants work like other steam-based power plants.

“You’re using a heat source to boil water, to make steam, to turn a turbine, to turn a generator, to produce electricity,” Fallon said.

Water in a third loop then cools that steam, causing it to condense. The water arrives — via more than 36 miles of underground pipe — from Tolleson’s 91st Avenue sewage treatment plant. The water then undergoes further purification at Palo Verde, which retains it in 45- and 85-acre reservoirs.

“It’s really the biggest water treatment plant — at least, in this country — that is not for domestic water use,” said Jack Cadogan, senior vice president for site operations.

As water from this cooling loop condenses steam from the boiler loop, it heats up. Cooling towers disperse this heat: Some escapes as steam, while the rest radiates from droplets as they fall from the towers’ tops. The system automatically makes up any water loss.

A nuclear plant’s capacity factor — the ratio of actual to possible power output — exceeds 92 percent, compared to 63 percent for coal and 36 percent for renewables. That’s because reactors run full bore, 24/7, for 18 months.

Palo Verde staggers its outages so that two reactors always stay up. Fallon said that only one-third of a reactor’s 241 fuel assemblies are swapped out per outage — the rest are rearranged to balance the power curve.

The Fuel Building holds both new and spent fuel. The latter cools in a pool for four to seven years before it’s loaded, in groups of 24, into 20-foot concrete casks — all 144 of which stand in a field onsite. Within each are a stainless steel and helium sandwich which stops corrosion, said Palo Verde nuclear training director Paul Bury.

(Photo courtesy of APS)
A fuel-handling machine (tube, foreground) extracts a fuel assembly from a reactor. Each assembly measures 8 inches by 8 inches by 14 feet.

“I don’t need power for a fan or any liquid cooling," Bury said. "Once it’s in that canister, it can sit like that for eternity.”

Throughout the process, all fuel remains under water, which cools it and helps block radiation. A fuel-handling machine loads fresh assemblies onto a sunken tram, which conveys them to the Containment Building: a 20-story tower built of steel-lined, reinforced concrete walls up to 4 feet thick.

Inside containment, we stand high above the open reactor. Normally, a pressure vessel head, with control rods to curb reactor activity, would seal the top. Today, nothing stands between us and the radioactive fuel but 20-plus feet of water.

“That’s a ceiling — that’s what’s keeping us right now at a very low dose with that fuel, right there, exposed to us,” said Bury.

Within the reactor, we can just make out the eerie light of Cherenkov radiation, a deep blue glow caused by radiation traveling faster than the speed of light underwater, creating a kind of sonic boom with electrons.

Nuclear plants provide one of the least deadly forms of energy, yet we can’t seem to shake our fear of fission. We’re haunted by Chernobyl, and we still lack good solutions for nuclear waste — a fact that was recently underlined by the collapse of a tunnel at Hanford nuclear waste site in Washington state.

“We had that agreement originally, which was Yucca Mountain,” said Cadogan. 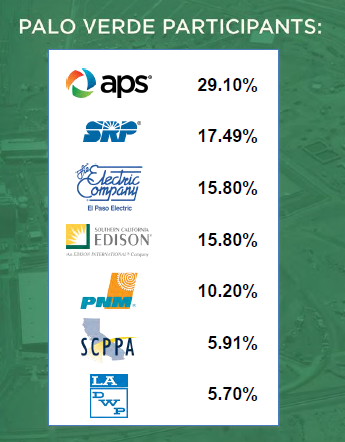 The Obama administration defunded the Nevada repository. That could change under President Donald Trump, but so could other energy priorities. Trump made that clear in his remarks at Environmental Protection Agency Headquarters during the signing of the Energy Independence Executive Order, which began a process of pulling back from several major Obama administration climate policies.

That poses a problem, because nuclear power offers the only existing carbon-free technology that can meet future energy needs.

When Westinghouse Electric Company filed for bankruptcy in March 2017, it threw parent company Toshiba’s nuclear ambitions into question — along with the future of the South Carolina and Georgia plants the company was constructing. The development cast doubt on what some have been calling a nuclear power renaissance.

“They were the first of that next generation nuclear — an even more safe nuclear design,” Cadogan said.

There’s no plan to expand Palo Verde, but the Nuclear Regulatory Commission has extended its license to the mid-2040s, with an optional 20-year extension.