Trans Queer Pueblo Discusses Why It Protested At Pride Parade 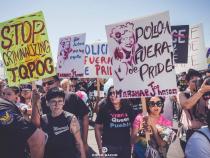 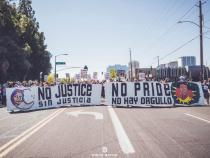 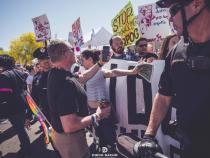 But about 100 activists staged a demonstration in the middle of the parade and asked for a larger voice in the Pride movement.

They were from the group Trans Queer Pueblo, or TQP, which advocates for the rights of undocumented immigrants within the LGBTQ community.

The Show’s Lauren Gilger is here with more.

What message were the TQP group hoping to get across with this demonstration?

They wanted to make a point: Phoenix Pride needs to remember the true roots of the Pride Parade, and stop collaborating with police and corporate sponsors.

They were specifically protesting the involvement of corporate sponsor Bank of America in this parade, because, they say, the bank helps finance the mass incarceration of immigrants.

They wanted to get their message across by temporarily halting the parade, but if you listen to video of this you can hear that it got pretty heated.

You can hear some parade onlookers shouting at the demonstrators, saying things like “Get out of the way” and “This is our day, not your day”

It sounds like maybe some bystanders didn’t know that members of Trans Queer Pueblo are part of the LGBTQ community, too.

Right, but to be clear, Pride organizers were aware of the group. Jeremy Helfgot is a communications specialist organizers hired to speak on the issue.

The organization wanted there to be an opportunity for TQP to have their protest, to have their concerns heard and to be able to do so without interference.

Helfgot says that police stepped in to ask protesters to move along only when things became heated and that Pride organizers want to hold discussions with TQP about being more inclusive.

This is an interesting example of what’s called intersectionality, when issues like race, class and gender overlap.

It’s the idea that issues like gay rights and immigrant rights, for example, are not separate. There are people in both camps, affected by both causes and the actions of one group can affect another.

Intersectionality has become an important part of the conversation and to talk more about how this played out at this year’s Phoenix Pride Parade, I spoke with Sujey Vega, an assistant professor in Women and Gender Studies at Arizona State University.