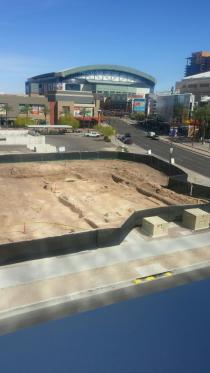 Archaeologists have unearthed about five Hohokam pit houses and a well from a historic firehouse at the site of the next CityScape development in downtown Phoenix.

When built, the area’s first Fry’s grocery store will sit within the bounds of Pueblo Patricio, the Hohokam farming village that lies beneath much of downtown Phoenix. The village saw use from around 300 B.C. to 1450 A.D., said Laurene Montero of Pueblo Grande Museum, which will house the finds.

Montero was impressed that the remains survived years of activity in a busy area that’s held a firehouse, a theater, a J.C. Penney’s and a parking lot.

“We often hear, ‘this area is completely disturbed, there’s utilities out here, there’s old buildings out here, what’re you going to find?’ Well, you know, this is really good example of, there’s a lot of varied archaeology that can be found even with all the disturbances,” she said.

With the archaeological work complete, the Fry’s will break ground on Thursday.