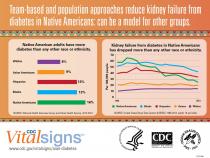 (Photo by Centers for Disease Control and Prevention) 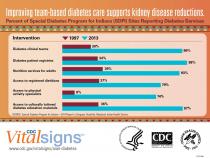 (Photo by Centers for Disease Control and Prevention)

The Centers for Disease Control and Prevention (CDC) reports that rates of diabetes-related kidney failure among Native Americans dropped more than 54 percent between 1996 and 2013.

The finding were published by CDC and the Special Diabetes Program for Indians (SDPI), a $150 million annual grant program coordinated by the Indian Health Service.

Congress established SDPI in 1997, in response to a surge in diabetes rates among Native Americans, who today remain twice as likely as some other groups to have the disease. Beyond kidney problems, SDPI has lowered the risk of complications such as amputations, blindness and heart disease.

Dr. Ann Bullock, lead author on the study, says that it has also improved prevention:

“Rates of Type II diabetes still are highest among Native Americans, among U.S. racial groups. However, our rates have actually flattened out and the beginning of a suggestion of a decrease is starting to be seen," said Bullock.