Silica Nodules In Chile Argue For Ancient Life On Mars 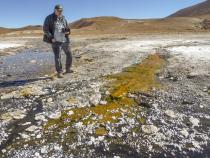 (Photo by Steve Ruff)
ASU astrobiologist Jack Farmer stands beside one of the hot spring outflow channels, tinted yellow-green by microorganisms, at El Tatio in Chile.

(Steve Ruff/Jack Farmer/Nature Communications)
Comparison of Mars opaline silica (left) to deposits at El Tatio (right). Scale bar in (a) and (b) represents 10 cm; in (c) and (d), it corresponds to 5 cm. 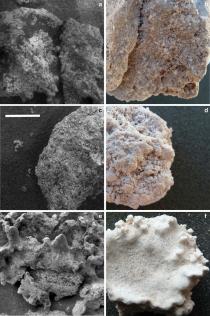 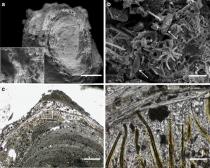 Work in the Chilean desert by Arizona State University scientists has reopened debate regarding the biological origins of Martian silica fragments found in 2007 — and strengthened the case for life on Mars billions of years ago.

The findings were published in the Nov. 17 edition of Nature Communications.

NASA’s Spirit rover churned up the opaline silica deposits as it explored the Columbia Hills area of Mars’s Gusev Crater.

Opaline silica, a non-gem form of opal, requires water to form, so scientists hailed the nodules’ presence as evidence that wetter conditions prevailed on Mars 3.8-3.5 billion years ago.

Because life as we know it needs water, the find also lent credence to the idea that the red planet might once have supported life.

Yet the specific geology that formed the fragments remained somewhat muddy: Did they form in hot springs, or in the underwater volcanic gas vents called fumaroles?

“Why all this matters is that, on Earth, for example, hot springs are almost always found to have microbial life. So, the combination of hot water and the chemistry leads typically to microbial communities that thrive around these hot springs. Less so for fumaroles,” said ASU planetary geologist Steve Ruff.

Ruff, along with Jack Farmer, his ASU collaborator and coauthor on the paper, favored the hot springs model, but Ruff said that they were in the minority.

“We didn’t really have enough evidence at the time to really support the hot spring model," Ruff said. "And so the fumarole idea was the one the kind of took hold.”

And so matters stood, until they came across a paper in a volcanology journal describing a geyser park called El Tatio — or, as Ruff prefers to call it, “the Yellowstone of Chile.”

“This one occurs at over 14,000 feet at the edge of the Atacama Desert in Chile, so it’s a very cold, dry, high-ultraviolet-radiation-from-the-sun kind of environment,” Ruff said.

More so than perhaps any hot springs on Earth, El Tatio provided a passable stand-in for ancient Mars, when warmer and wetter conditions (by Mars standards) prevailed amid a thicker atmosphere.

Better still, there in the trickling outflow channels of its hot springs, fingerlike structures of opaline silica — much like those that Spirit had encountered on Mars — grew amid microbial slimes.

“What was really enticing is that, also in these discharge channels were abundant microbial communities — single-cell organisms thriving in this shallow, thin water of this environment, in association with these digitate structures,” Ruff said.

When Ruff and Farmer cut the samples open, they saw a clear resemblance to what Spirit had found in Gusev Crater, bolstering the argument that hot springs, not fumaroles, made the Martian silica fragments. More than that, however, they realized that they had found a living laboratory that showed biology playing an integral role in the nodules’ construction.

Did that imply, however indirectly, that a similarly biomediated process had once played out on Mars?

“It’s the same mineralogy, they’re in a very similar volcanic environment on both Mars and at El Tatio," Ruff said. "And the ones in Chile, at El Tatio — there’s biology involved."

“As they live and die, they’re accumulating silica on top of themselves, and it just creates these fingerlike structures as the layers of silica and the layers of dead microbes accumulate," Ruff said.

The finding does not prove that microbes played a role in forming the Mars fragments.

But, as NASA contemplates where to send its 2020 rover, it bolsters the case for a return to Gusev Crater, where Ruff said new instruments could provide clearer indications of the origins of the Mars silica deposits.

“There could be layered structures that we could see with that camera, and then also detect the presence of organics," Ruff said. "If we can see layers and detect organic matter, that would be huge. It’s not definitive for life, but it certainly would be a major set of observations in support of this hypothesis, that we found ancient life.”