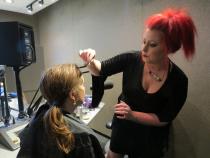 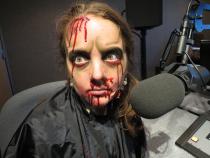 (Photo by Kaitlin Stein)
Makeup, fake blood and latex make reporter Stina Sieg look like something from a horror film. 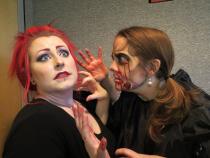 (Photo by Kaitlin Stein)
DeAndrea’s Zombie FX makeup workshop will be held at Theatre Works at Peoria Center for the Performing Arts on Saturday and Sunday.

For Halloween enthusiasts, October isn’t that far away. And if you’re going to win the prize for scariest zombie at the costume party, you should probably start perfecting your look now.

If you’re not sure just how to apply your fake blood and give yourself a gnarly neck wound, don’t worry. Your undead dreams are about to come true. Theatre Works at Peoria Center for the Performing Arts will be hosting a Zombie FX makeup workshop this weekend, led by makeup artist DeAndrea Vaughn.

DeAndrea came into the studio to show us her best tricks and KJZZ reporter Stina Sieg agreed to be our undead model.

"So what I’m going to start off with, I’m going to take a green color, it’s a cream foundation, as well as a black, kind of blend them together, that way it’s kind of a dead, contoured look to her, to kind of make her a little more pale, a little more zombie looking," Vaughn said. "If you actually just follow the structure of a skull, that’s going to give you an idea of where you need to contour at."

Immediately, Stina looked more haggard and gaunt. And within minutes, her face seemed sunken in and gray.

"You can do a very simple zombie that’s just pale or you can do cuts, gashes, wounds, melting faces — just throw a bunch of blood on it and pretty much you have a zombie," Vaughn said. "That’s the best thing about a zombie. It’s really up to your imagination. It really depends on what you want to create. That’s why I like them so much, you can do whatever you want with them."

As DeAndrea explained this, she continued to blend and layer Stina’s makeup. She took an applicator and dabbed on red, brown and black creams to make bruises and scrapes. She also added more color and depth around her eyes. They looked wide and bulgy against her freshly rotting face — and then it got really creepy.

"Alright, so we’re going to make a little bit of hanging skin, so I’m just going to use some latex on a sponge and pad it all over her face," Vaughn said.

"So you have to let the latex dry before you put on several different layers, so I’m going to do a little bit of scarring makeup so it looks like she has some road rash," Vaughn said. "A little bit of cuts and we will move on to the blood after that."

And while you might think all of the walking dead are the same, DeAndrea said there’s actually a big difference between creating a newly infected zombie, and one that’s been dead for years.

"The longer that a person is decomposing, the more flesh is hanging off, the weirder the skin color is going to be," Vaughn said. "Right now the zombie that we’re making, she’s a little more fresh because we didn’t cover her entire face, so she’s relatively newly dead. But the further she gets decomposed she’s probably going to turn a little bit more green and gaunt as time progresses. Okay, her skin’s a little ready so we’re going to start peeling back the latex itself to give that hanging skin look. "

From a few feet away, it really looked like DeAndrea was peeling Stina’s skin off. And when she was done, Stina had a fresh, gaping flesh wound. But the most important, iconic part was still missing. The blood.

"Pretty much that’s the question that everyone wants to know," Vaughn said. "'When do we get to start putting blood on?' But other than that, it’s 'how do you make the skin look like it’s peeling off?'"

When asked what part was most gratifying for her, Vaughn was sure of her answer— the blood.

"Well, I definitely love the skin peeling, I do that quite a bit. But, um, the blood part is definitely my favorite part," Vaughn said. "Cause that’s the final touch to it when you’re done with everything, throw some blood on it and send them on their way."

As she finished up, I took another look at my coworker and her transformation is completely horrifying.

If you’re ready to terrify your coworkers, you can raise the dead this weekend at DeAndrea’s Zombie FX makeup workshop. It will be held at Theatre Works at Peoria Center for the Performing Arts on Saturday at 10:00 and Sunday at 1:00. Teens who participate in the workshop are guaranteed a walk-on zombie role in the theatre’s production of "Night of the Living Dead," which runs from Oct. 10-Nov. 2.