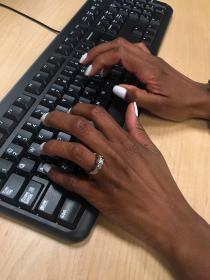 Last year, the White House launched an initiative called TechHire. The idea is to target young people, specifically those individuals who may not be able to go to college or find a good job and train them in technology. Phoenix was recently designated a TechHire community.

Steven Zylstra, president and CEO of the Arizona Technology Council, says there’s a demand for IT workers both in Arizona — and nationwide — and that companies are willing to pay for that much needed talent.

"People in tech field make roughly two and half times the statewide salary average which, I think is a little over $40,000. These are very high-paying high-quality jobs. And a lot of small companies not as specific about getting four-year degree," Zylstra said.

Which means a certificate or Associates degree could suffice. TechHire and its partners hope to train and place more than 100 people in the next year.

There are nearly 600,000 open IT jobs across the country, according to the White House, and they’re not just in the tech industry.

According to Rosalyn Boxer, vice president of Workforce Development at the Arizona Office of Economic Opportunity, IT companies as well as companies in health care, insurance and manufacturing need IT people in their businesses.

And, they “can’t find enough people that have the level of skill and years of working in that area to have the broad knowledge,” she said.

Boxer and other business leaders in the state recently signed Arizona onto TechHire, a White House initiative that aims to build a pipeline of tech talent that can give people a pathway into the middle class.

Boxer said they felt it was important to the state’s economy to grow people in the IT sector, since so many companies they work with say they need to fill those jobs.

As of today, Boxer said there are more than 6,200 job postings in the IT field in Arizona.

“Believe me, there isn’t a single company that doesn’t have a need for somebody that has good IT skills,” she said. “And so if you are the person that has those skills, you have a job. That’s important.”

The Office of Economic Opportunity is working with the Arizona Tech Council and other groups on this and they’re aiming to develop a boot camp for people who are interested in IT and need the skills to do it and the certifications you need to get hired.

Their goal is to get 100 people into IT jobs in the first year of the program and 500 people in the next four years, Boxer said.

They’re already running a small pilot program to test this out now. It’s a two-week boot camp for training and then they’re placed with a company for a paid apprenticeship, according to Boxer.

“Apprenticeship is a very old system, but it is now being retooled to meet the needs of the new industry areas and the new occupations,” she said. “So, we want to put people into IT apprenticeship programs.”

And, according to Boxer, these are the jobs of the future, so it’s important to Arizona’s economy that they are filled.

“The future of our economy is not only about how you bring companies in or grow companies, but in order to be successful, you have to have the good workforce to man those companies,” she said. “IT is part of that workforce.”