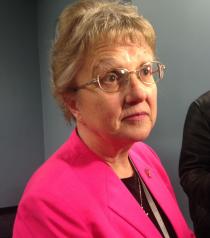 The 162-page plan also suggests a decreased emphasis on mandated statewide standardized tests and making it easier for qualified candidates to become teachers.

Rebecca Gau, executive director of Stand For Children Arizona, says it’s hard to disagree with much of what’s in the plan — although the details will be important.

Gau says the biggest question in education funding tends to be where the money will come from.

Douglas’ plan calls for using about $420 million from the state’s rainy day fund to pay for boosting teacher salaries by 5 percent.