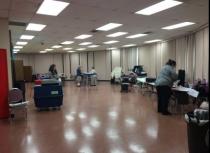 (Photo by Casey Kuhn - KJZZ)
Ballot workers get the final tabulations ready to deliver in Maryvale as the last voter cast their ballot at 9 p.m.

On Friday afternoon, Maricopa County Recorder Helen Purcell said ballots for Nov. 8 had been completely counted. That was only 10 days after the election, and a lot of people were wondering why it took so long.

Eric Spencer, elections director for the Arizona Secretary of State’s Office, says state law doesn’t allow counties to count early ballots until one week before Election Day. He thinks a greater number of voting centers will be a major innovation.

A number of national elections experts say Arizona isn’t alone in being perceived as a slow ballot-counting state. Among them is David Becker, executive director of the Center for Election Innovation and Research.