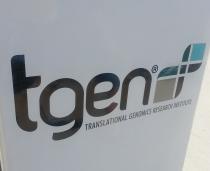 The findings, which appeared in the Oct. 28 issue of PLOS ONE, revealed that knocking out key links in a molecular signaling chain can hinder the cancer’s invasion of nearby nerve cells.

Pancreatic cancer is the fourth leading cause of cancer deaths in the United States each year. Its five-year survival rate hovers below 6 percent, and pancreatic cancer rates have risen over the past decade by 1.2 percent annually, according to the Centers for Disease Control and Prevention.

“Pancreatic cancer patients also suffer — most of them, at least — with severe pain during their time of disease and short survival time,” said Haiyong Han, head of TGen’s Pancreatic Cancer Program, who worked on the study.

In short, pancreatic cancer is known for two things: mortality and pain. Linking the two is perineural invasion (PNI), a process by which cancer cells invade and spread through nearby nerves, wounding nerve endings.

To make inroads, these cancer cells rely on signals passed along the nerve growth factor (NGF) pathway that they share with nearby nerves. These signals are transmitted, in part, by a catalyzing enzyme, or kinase, called TRKA (tyrosine kinase receptor-A).

TGen tested whether knocking out TRKA would stem the migration of pancreatic cancer cells. It did.

“So we think that this particular pathway — or the components of this pathway, i.e., NGF or the receptor TRKA protein — can serve as potential drug targets for developing therapeutics that can prevent nerve invasion and also alleviate or prevent pain in patients with pancreatic cancer,” said Han.

A number of TRKA-inhibiting drugs are in early clinical trials — years away from being tested as pancreatic cancer pain therapies in humans. But if they work, they could also put a dent in the viability of pancreatic cancer.

“If we can hit the signaling, we not only reduce the migration or invasion, but also reduce the growth of the cancer cells,” said Han.