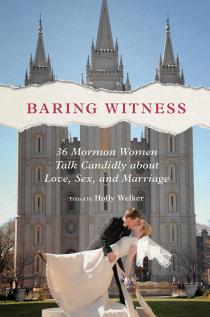 (Photo courtesy Holly Welker)
Welker gathered she gathered the essays of 36 Mormon women who write firsthand about their marriages.

In the introduction of her new book "Baring Witness: 36 Mormon Women Talk Candidly about Love, Sex, and Marriage," editor Holly Welker writes that it’s hard to be Mormon and not think a lot about marriage.

That’s because marriage is so central to Mormon culture and theology. But, she said, it’s not often talked about in personal ways.

So, in the new book, she gathered the essays of 36 Mormon women who write firsthand about their marriages.

The idea came to her not long after her mother died, she said.

“One of the things I began to realize was that there were things about her life I didn’t understand and there were questions I never asked her,” she said. “I just started wondering more about what marriage felt like for people in it, especially since, I myself am still single.”

Welker was raised Mormon. She is a fourth-generation Arizonan who grew up in Thatcher, a town she said is so Mormon that they held their high school prom in the church’s cultural hall.

But she stopped attending church in her 20s.

“There are a number of ways I didn’t fit the Mormon paradigm,” she said.

So, to compile this book, she started reaching out to anyone she could think of, she said. She wrote old friends from high school and posted on blogs frequented by Mormon women.

Some women said no, but many said yes. And, in the end, she gathered about 70 essays that she narrowed down to 36 in the book.

She said it was initially a challenge to get the women to talk about their marriages.

“They would immediately begin to talk about motherhood,” she said, “which is not surprising, since marriage and motherhood are often linked in Mormonism.”

First, Welker said, you have to understand how central marriage is to Mormonism.

“It’s crucial to the theology,” she said. “It’s a commandment, an absolutely necessary prerequisite for salvation and exaltation,” she wrote in the book’s introduction.

And, the stories she gathered about it are incredibly varied. “I wanted a range,” she said. “Showing that there is not a single, monolithic LDS experience for marriage was part of the point.”

So, she has essays from women who are in same-sex relationships, essays by women who never married, and essays about divorce, and about widowhood.

“Literature relies on conflict, so most of the essays are about marriages with difficulties,” she said. “But, I really wanted an essay by someone whose marriage had been pretty consistently happy.”

That essay was written by a woman who got married at age 19, and feels like she just got lucky.

“She was too young, too naïve, too concerned with other things besides passion to really know what she was doing, but she feels very happy and very lucky in her marriage,” Welker said.

In displaying that range of stories, Welker wants it to be clear that the book is not “pro or anti Mormon.”

The book is peer-reviewed and not a polemic, she said.

“I do not take a stance either attacking or defending the LDS church,” she said. “My main point is to provide a platform and a framework for individual women to tell what they perceive as the truth about their marriage. And, I would hope people could understand why that’s neither pro nor anti Mormon.”

EDITOR'S NOTE: This story has been modified to reflect that Welker is a fourth-generation Arizonan.