Board Game Brings National Parks To Your Living Room 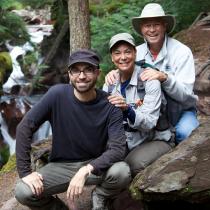 The National Park Service is celebrating its centennial this year, but if you can’t physically get to your favorite park, you can visit in your living room. Kind of.

Artist and game designer Charlie Binkele has created a board game called Trekking the National Parks. The project was a personal one, the idea came from his dad, John. He and his wife are on a mission to visit all 59 major National Parks. They’re almost there and in 2009, John asked Charlie to make the game.

"Ever since I saw Yosemite, when I was 7 years old, I was just inspired by just the solitude the beauty, the grandeur, I mean, these things are like outdoor cathedrals to me," John Binkele said.

Charlie Binkele helped bring those natural cathedrals to life with his dad's photographs of the parks.