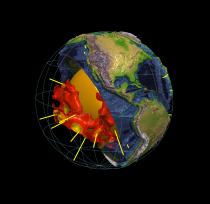 (Photo courtesy Ed Garnero, Hongyu Lai, Arizona State University)
A cutaway of Earth’s surface allows a view of the interior down to Earth’s core. This image shows a massive anomalous region beneath the Pacific Ocean, depicted by the red contours.

Movie-goers have been journeying to the center of the earth for decades – but along the way, they’ve probably never encountered giant blobs.

Scientists at ASU have, though. Researchers use the seismic waves from earthquakes to study the earth’s insides, and have been imaging parts of the planet that seem a little different from place to place.

What are the blobs?

Scientist Ed Garnero said it's hard to know for sure yet, but the blobs are different material than the rest of the earth around them.

Garnero is a professor in the School of Earth and Space Exploration, and a seismologist at ASU who contributed to the research now published in the journal Nature Geoscience.