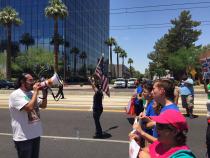 Phoenix police arrested four people who blocked Central Avenue in downtown Phoenix for more than an hour in protest of the Supreme Court's decision blocking President Barack Obama's plan to shield millions of immigrants from deportation.

"When migrant families are under attack, what do you do? Stand up, fight back," about 75 protesters chanted.

They gathered outside the U.S. Immigration and Customs Enforcement building in Phoenix at around 11 a.m. Thursday. Activists blocked parts of Central Avenue, a major thoroughfare, just north of downtown. They carried signs in sweltering heat and chanted in Spanish and English. Among them was Bertha Abila.

"Our Hispanic people are treated like slaves working eight hours a day for $1," Abila said in Spanish. "And here outside they put is in shackles because they think we're a danger to escape."

Abila said she spent months in a detention center in Eloy and is a mother to five U.S. citizens. She said she is in deportation proceedings and her next court day is in August.

The U.S. Supreme Court earlier in the morning affirmed a lower court’s ruling blocking President Barack Obama’s plan to give legal status to about 4 million people living in the country illegally. The plan is also known as DAPA, Deferred Action for Parents of Americans and Lawful Permanent Residents.

The Court had considered whether to lift a preliminary injunction issued by a federal judge in Texas that blocked the president’s November 2014 executive order. Arizona joined 25 states as part of a lawsuit challenging the immigration plan.

"Do you want to give the president the unfettered authority to basically rewrite federal law when they disagree with it?" Arizona Attorney General Mark Brnovich said. "So to me this is a broad principle. This isn’t about immigration per se."

With the court one justice short, the ruling resulted from a 4-4 tie.

Phoenix attorney Ray Ybarra Maldonado, who practices immigration law, said the decision would have likely been the same if conservative Justice Antonin Scalia were still alive.

Maldonado said despite the ruling, the lawsuit will continue in southeastern Texas. He thinks it will be a year or two before a decision is reached.

For some Arizona immigrants, the issue is not a question of principal, but of how a law impacts their lives and those of their families.

Emily Lopez, 16, was among the protesters in downtown Phoenix Thursday afternoon. She said her mother fled El Salvador in the 1980s and would have qualified for DAPA.

"We’re human. You can’t treat us like animals," Lopez said. "My mom came here 'cause she had no choice. Civil war was a life or death situation. People think that deporting us will solve the problem. No it won’t."

The Migration Policy Institute estimates there are 97,000 people living in Arizona that would have qualified for DAPA.

Associated Press contributed to the report.