Building In Gilbert Focuses On Advancing Women In The Workplace 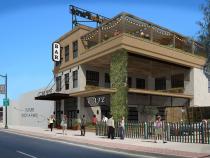 (Photo courtesy of TicketForce)
A digital rendering of Building 313 shows the plans for the building to be a three-story, mixed-use space.

Construction started on a mixed-use building in downtown Gilbert last week called Building 313. It’s owned by Lynne King Smith, who was looking to create a new space for her company, Ticketforce, an online ticketing management company. She teamed up with Lorraine Bergman, owner of Caliente Construction, to build it.

Then she realized how rare it is for a project like this to be spearheaded by two women, and the building turned into something bigger.

“That’s what this building is becoming is a very visible, tangible thing," King Smith said. "Other women can see what Lorraine and I are doing in that space and hopefully be encouraged to not have boundaries that they maybe think they have based on what their field is or their perceived limitations are. So that’s really what we’re hoping the building becomes."

She added another floor to the original plans for a co-working space for women, and expects the building to be finished in 2017. KJZZ’s Lauren Gilger spoke with Krista Brookman. She’s Vice President of the Inclusive Leadership Initiative at Catalyst, a nonprofit based in New York that aims to help women move forward by building inclusive workplaces. Brookman said to build those kinds of workplaces, you have to remove the barriers women face in workplace culture, like stereotypes about their personalities.