Did You Know: Barrister Place Building In 1960 'Psycho' Film 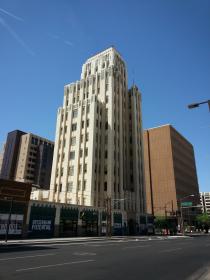 Dozens of locations throughout Arizona have been used as a backdrop to many Hollywood films. But only one captures the Phoenix skyline.

The Barrister Place building, a prominent structure in downtown Phoenix, opened in 1915.  It’s one of the older buildings in the area. Did You Know: Barrister Place is the building used in the opening scene of Alfred Hitchcock’s 1960 film 'Psycho?'

“The film opens with a panning. And it’s a panning of what Phoenix looked like in 1960," said ASU professor David Foster, who authored the book Glimpses of Phoenix. “And then the camera fades to a lover’s tryst that is taking place in a hotel room and the camera focuses in the hotel room. And the building that is used for that location is what is today Barrister Place.”

It's on the corner of Central Avenue and Jefferson Street. Just one block west is the Luhrs Tower.

“It is one of the most memorable utilizations of Phoenix in film making,” said Foster.

From the moment the film fades up from black we clearly see Camelback Mountain, The Westward Ho, skyscrapers, city streets and South Mountain.

Foster said this film is unique because there are so few images that exist today that show the Phoenix skyline from that time, “I have spent a lot of time looking at old photographs of Phoenix which are hard to come by, by the way, and I have found no similar photograph of that opening pan.”

The Phoenix segment ends with another view of the city. Janet Leigh’s character heads off to California driving down Central Avenue.

The Barrister Place building is owned by the city of Phoenix. It’s been vacant since 2010. Phoenix hopes to have an investor revive the historic structure.