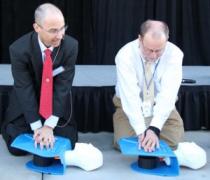 911 calls in Arizona are undergoing changes that require callers to become participants. For example, a dispatcher walks a caller through doing compression CPR on someone in cardiac arrest. Arizona is the first state in the country to set up a standardized process to do this, but King County, Washington, where Seattle is, has been doing it for a long time.

Medical Director for the Bureau of EMS and Trauma System at the Arizona Department of Health Services, Ben Bobrow, said it hasn’t always been this way. "The public, I believe, they expect this, and they want these life-saving instructions. But, until we started this, it was not uniform that you were gonna get these instructions," he said.

Bobrow said sudden cardiac arrest is one of the top three causes of death in the United States. For every minute someone suffering from it doesn’t receive any care, their chance of survival drops by up
to 10 percent.

Bobrow said most of the time, people don’t do CPR. "They either don’t know how to do it; they’re not confident; they don’t want to hurt someone; they’re afraid," he said.

He said about three years ago, the state started training dispatchers to tell callers how to do compression CPR, and making sure they all did it the same way. "There’s 6.5 million people in Arizona," Bobrow said. "It would take us a long time to train everybody and get everybody to do CPR. But, we probably have a few hundred 911 dispatchers. So, it’s a much more efficient way for us to get the treatment out to everybody, to really, really focus our efforts and attention and time on training all the dispatchers to be really good."

Bobrow said state officials started tracking how the program was working to see if it helped save lives.

"We actually measure the proportion of times that they identify cardiac arrest correctly, the proportion of times they start instructions, how often they get the caller to actually do CPR and then how long that takes. We actually measure a key time interval from call receipt to the first chest compression – and we think that’s actually one of the key performance metrics." He explained. "We did have success with ‘let’s teach everybody.’ We had success – we actually showed that, and we’re also finding the same thing with this program, where actually we’ve been able to measure, as a state, we decreased the time from call receipt to first chest compression by 90 seconds."

The public health community has noticed. Bobrow said the federal Centers for Disease Control and Prevention are looking at how to expand the program to the rest of the country.

"It would be very scalable, and it wouldn’t cost a significant amount of money and what we believe is that we could save thousands of lives a year across the country if we did this."

He explained the cost would be around $1.5 million. "That’s a lot of money, but if you actually look at literally thousands of lives could be saved a year, it turns out to be an incredibly cheap public-health intervention."

Bobrow said the state health department has already developed a web-based training module and a data collection tool. Now, it needs to raise the cash. Bobrow said the CDC is working with its foundation to do that.