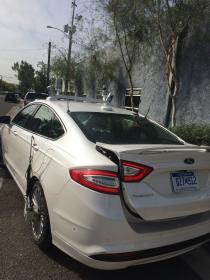 Self-driving cars might seem like the ride of the future, but the future is now. Arizona Governor Doug Ducey recently appointed an oversight committee to race ahead of the technology.

Kevin Biesty, deputy director for policy at the Arizona Department of Transportation (ADOT), said the technology is here. Now, the question now is: How can states have a role in implementing it?

They’re looking for opportunities to advance these technologies in the state and get rid of any regulation that could get in the way, Biesty said.

“What we like to say is that the technology, or at least the implementation, is going to be evolutionary rather than revolutionary,” Biesty said. “The states and localities have to be at the table because we have to be part of the discussion about what kind of infrastructure these vehicles are going to need, what kind of technologies we’re going to need to implement within the roadways.”

Some manufacturers are building self-driving cars that use optics and require clear line delineations on the road, Biesty said, and others are using GPS. ADOT needs to plan now.

Biesty said V2I, or vehicle-to-infrastructure communication, might involve putting sensors in the roadway that will help guide the vehicle through intersections of interchanges.

“The early research shows you can gain a lot of efficiencies both in energy, time and savings in shipping costs if you can keep trucks closer together and moving at the same speed and being able to break and operate at the same time,” he said. “Think of it like a train ... but it’s electronically connected.”

The more you dig into autonomous vehicles, the more possibilities arise. “It’s going to change people’s mobility options,” Biesty said. He said they are exploring how this technology could benefit blind people or the elderly, to name a few.

When it comes to safety, there are liability issues the committee will be exploring. But, Biesty said there are a slew of controlled tests and studies that show self-driving cars are safer than having people drive them.

He thinks it really comes down to one thing: “Last I checked, computers don’t drink alcohol or do drugs,” he said. “So, we believe there would be an increase in highway safety, and a decrease in fatalities and accidents.”