After Anti-LGBT Comments, Calls For Phoenix Councilman Nowakowski To Resign 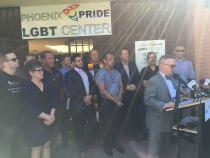 (Photo by Will Stone - KJZZ)
Representatives of local LGBT groups, elected officials, faith leaders and constituents gathered at the Phoenix Pride Center to condemn Democrat Michael Nowakowski for the comments.

Backlash against a Phoenix councilman, caught on video espousing views against gay marriage and the transgender community, has now grown into calls for him to step down.

“The councilman’s remarks were made behind the backs of the diverse community in the district he’s supposed to serve and who he claimed to support," said Brendon Mahoney, an attorney and chair of Phoenix's Human Relations Commission.

"His past support for the LGBT community appears to be a calculated move purely for personal political gain," Mahoney said.

Those backroom comments were recorded during a meeting between Nowakowski and a group of pastors about the recent controversy over ending public prayer before city council meetings. After discussing the issue, Nowakowski said, “I never thought I would see the day that men would marry men, or that people are allowed in the same bathroom as my daughter.”

"The world is changing, and it’s time for us to take the leadership and change it back to the way it should be," Nowakowski said.

The video had been online since February, but was recently circulated by an activist and immediately set off widespread outrage on social media.

In response, Nowakowski issued a statement apologizing for the remarks and saying as a Catholic "It is often hard to personally reconcile such issues on a religious perspective."

The councilman said his remark about changing the world "back to the way it should be" was not, in fact, an endorsement of rolling back LGBT rights, but rather in reference to preserving public prayer at council meetings.

That explanation fell short, and public pressure came to a head on Thursday as prominent members of the Phoenix LGBT community asked for Nowakowski's resignation.

“In the simple time since the councilman made this statement and this video went public, the amount of hatred that we’ve received even within this facility through phone call and through action shows that his words are not excusable," said Justin Owen, the executive director of Phoenix Pride, which runs the LGBT resource center downtown.

"You can’t apologize. You have bred hate," Owen said.

Jon Ryder, the executive director of the Maricopa County Democratic Party, said LGBT equality is "a core value for our party" and he supports the other community leaders "in asking for Council member Nowakowski to do what's right and step down."

The strongest denunciation came from fellow Democrat State Senator Robert Meza, one of the openly gay members of the legislature.

Meza said he had seen "red flags" regarding Nowakowski's views on LGBT issues years ago.

Among them, he said Nowakowski once told a potential candidate, who was openly gay, that he "shouldn't run on the West side. You're gay. You belong in a gay district."

Meza also said that four years ago volunteers from Nowakowski's campaign were telling Meza's constituents not to support him because he was openly gay.

"It's pure hypocritical. He should never have misled the people and his constituents in stating he was behind us," Meza said.

On Thursday afternoon, Nowakowski addressed the media for the first time and denied he had made any other anti-LGBT statements in the past. He called Meza’s allegations “politically motivated.”

Nowakowski also reiterated his support of civil rights, gay marriage and the non-discrimination ordinance passed by Phoenix in 2013. While Nowakowski said he was in favor of the law, he was traveling at the time and never actually cast a vote on it.

“I am sorry that my statements were offensive, but I ask you all to look over my past voting records and it will show you that I have a longstanding support of this community,” said Nowakowski.

The councilman said during that meeting with the pastors issues like gay marriage came up and he actually defended LGBT rights. He was not sure if that part of the meeting had been recorded, though.

He said his comments were made in the heat of the moment and not representative of how he actually feels.