Download mp3 (5.57 MB)
(Photo by Mark Brodie-KJZZ)
Firefighters practice deploying and getting out of their fire shelters. 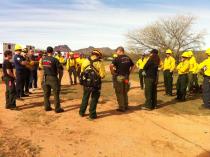 (Photo by Mark Brodie-KJZZ)
Firefighters get a briefing at their training this week.

Wildland firefighters from across the Valley had their annual training this week, getting refreshers on everything from communications equipment to using portable water tanks to deploying fire shelters. The Central Arizona Wildland Response Team has put on the event for the past decade for local, state and federal agencies. Lou Mirabelli is a captain with Rural/Metro Fire Department and said every year, firefighters go back to basics.

One of the findings from the Yarnell Hill Fire Serious Accident Investigation Team was that the firefighters’ shelters, “stood no chance against the fire.” At this week’s training, firefighters practiced deploying them, and communicating once they had.

Trainers would rattle the practice shelters to simulate the wind they would experience. Andrew Mandell, a fire prevention officer on the Tonto National Forest, said something has gone wrong if firefighters have to use them. But he said the training for that possibility is not changing because of the Yarnell Hill Fire.

"Training is training, year in and year out. As far as preparing for fire season, we have checklists and things that we do, and it’s business as usual as far as that’s concerned, from what I’ve seen," said Mandell.

Before they get out of their shelters, the firefighters communicate a message from one to the next. Mirabelli compares it to a game of telephone. And, he said, a lot of the techniques and equipment used today are not all that different from what has been used in the past.

But, that may not be set in stone. Diane Vosick of the Ecological Restoration Institute at Northern Arizona University said the jury is still out on whether the state gets more rain later this spring.

"If we get a lot of rain in April and May, that can help blunt the danger of fire season, but it can also contribute to increased growth in understory, which could lead to increased fuels in June," said Vosick.

Vosick said those fuels are the only fire variable people can control. So, she said the state needs to be more assertive about doing that.