Did You Know: Ash Avenue Bridge Was Once A Pivotal Piece Of Tempe Transportation 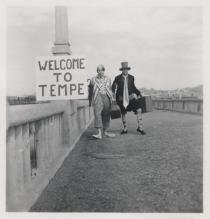 (Photo courtesy of the Tempe History Museum)
Wallace and Ladmo carry suitcases as they walk across the Ash Avenue Bridge next to a sign propped up against a pillar that reads "Welcome to Tempe," circa 1956.

You may have noticed it while walking in Tempe, how can you miss it? The piece of concrete sticks out like a sore thumb. Look close enough and you’ll notice it was briefly an important piece of the Valley’s transportation.

“From 1911 through 1913, the construction took about a year and a half, almost two years, and it was commissioned by the territory of Arizona, and George W. P. Hunt was the governor of the Territory,” said Mark Vinson, an architect with the city of Tempe.

“It was constructed using convict labor. Convicts from the state prison at Florence who were brought in to do the construction,” he said.

The Ash Avenue bridge abutment, which is at the southern end of the bridge, faces the lake. In the late 1800s and early 1900s residents in the Tempe area crossed the river either by foot, horseback, wagon or ferry depending on the level of the Rio Salado - or the Salt River. By around 1900 local leaders began discussions to build a bridge because construction of the Theodore Roosevelt Dam upstream would be under way. Phoenix built a bridge and another was constructed in Tempe.

“So, Governor Hunt assured the townsfolk of Tempe that it would be a safe project and no convicts would escape and that he would resign if any convicts escaped during construction of the project. My understanding is that one or two did, and he didn’t resign, but it’s because they caught them,” Vinson said.

The bridge was completed in 1913.  People as well as merchants used it.

“In the intervening years, 1911 and 1913, that was kind of the introduction of the automobile to Arizona, and by the time the bridge was completed it was, in a way, obsolete. It was only wide enough for the wagons and tractors to go back and forth,” he said.

A 1920s flood weakened a few of the supports for the bridge, making it unsafe for vehicles. By 1931 a new bridge was constructed to replace it - The Mill Avenue Bridge.

The Ash Avenue Bridge remained standing for several decades. Only pedestrians and bikers were able to use it.  By the 1990s, when construction began on the Town Lake, the bridge was determined unsafe. It had to come down. The city decided to keep the abutment as a reminder of its transportation history.

Today, the Ash Avenue Bridge abutment has been restored. The area around it has been enhanced with a handicap access ramp to the abutment overlook, which has a perfect view of the beach park and lake. This area is the visitor’s plaza, named the Veterans Memorial in Tempe Beach Park.

How a so-called party drug has become an accessible option for depression.