Did You Know: Scottsdale Airport Was A WWII Aviation Training Base

(Photo courtesy of the Scottsdale Public Library)
The Thunderbird Field 2 cadets during the time the airport was an aviation training base. An estimated 5,500 cadets were trained at Thunderbird 2, today Scottsdale Airport.

(Photo courtesy of Scottsdale Historical Society)
A view of the Thunderbird Field 2 control tower when it was a WWII aviation training base. 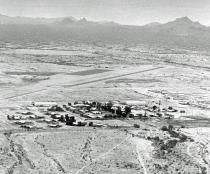 It’s not the biggest one in town — you might even say it flies a little bit under the radar. Hollywood stars who make their stop in the Valley certainly hope so. It’s history goes back to war time.

The Scottsdale Airport averages about 140,000 departures and arrivals a year. They’re mostly private and corporate planes. Did You Know… Scottsdale Airport was an Army Air Corp aviation training base during the second World War known as Thunderbird Field 2?

“This was primarily for U.S. Aviation cadets," said Joan Fudala, who has written extensively on the history of the Scottsdale airport.

“This was in the middle of nowhere. From our founding in 1888, Scottsdale through WWII was just a really small farming and ranching community centered in what is now downtown Scottsdale. And this was far north of where any development was," Fudala said.

Thunderbird Field 2 opened in June 1942. It’s boundaries were around what is today Frank Lloyd Wright Boulevard to Thunderbird Road, and from about Scottsdale Road to the Pima Freeway. The runway was a flat graded area. And the closest air marker was decidedly low-tech.

“The McDowell Mountains came in very important has a navigational aid to those cadets. In fact, Pinnacle Peak Mountain north end of the McDowells became a real important nav-aide. Years ago I interviewed several of the cadets that had trained here and said without Pinnacle Peak they may have not found their way back to Thunderbird Field," Fudala said.

Fudala said while U.S. cadets were trained here, all of the other airport workers were civilians, actually Scottsdale residents. During that time the base became the largest employment center in the area.

Thunderbird 2 closed in October 1944.  During the two years that it served as a military aviation base, an estimated 5,500 cadets were trained here.  After the war the land went through a series of owners, from Arizona State College to the federal government and by 1953 the Seventh-day Adventist Church purchased the land. The tower control and cadet facilities area was converted into what is today the Thunderbird Adventist Academy.

“The Adventist realized they had way more land than they needed.  So, they offered the landing area to the city of Scottsdale to open up a municipal airport, which the city did in 1967 and that became Scottsdale Airport," Fudala said.

A few of the Thunderbird Field 2 base hangars still exist today in the area where the school is located. The airport landing strip has been paved since then, but the angle of the runway is very similar to what cadets used to train on during WWII.