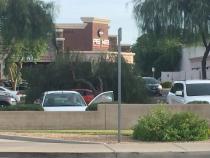 (Photo by Alexandra Olgin - KJZZ)
A tree fell on a car near 44th Street and Indian School Road in Phoenix.

City residents were notified by the National Weather Service at about 7 p.m. that a severe storm cell was making its way toward Phoenix. By 9 p.m. power was out across much of Central Phoenix, which was hit the hardest.

Phoenix Mayor Greg Stanton acknowledged the impact Tuesday morning at a press conference. “Last night, mother nature did at number on our city. And we had thousands of city personnel working throughout the night," said Stanton.
The storm caused flooding, winds downed trees and power poles and made a mess of many of the Valley’s roadways. Stanton said cleanup efforts are still underway.

“Obviously, there was significant street flooding in the city of Phoenix. Much debris was in the roadways. Much of it is cleaned up, but some of it is still there. Dozens and dozens of traffic signals lost power," said Stanton. "And, of course, during our major rush hour commute time this morning, some of our major thoroughfares – our police officers were out there making sure people were getting to work as safely as possible."

Workers were cutting tree limbs at the State Capitol building as part of that cleanup.

The Phoenix Zoo was closed today and will remain closed Wednesday for clean up, although spokeswoman Linda Hardwick said the animals made it through OK.

“All of the animals are safe and accounted for. Everybody was great; they weathered the storm very well. A large majority of them were safe tucked away in their night house, hunkered down," said Hardwick.

Hardwick also said several trees are down and there is lots of debris along the pathways, so staff is in the process of cleaning that up. Forecasters are calling for more stormy weather but Stanton is calling for preparednes.

The latest forecast from the National Weather Service in Phoenix called for a 10 percent chance of showers and storms through Tuesday evening.