Christina Estes/KJZZ
The view looking north from the rail-only bridge over Interstate 17 in Phoenix on November 21, 2022.

If you’ve driven Interstate 17 around Peoria and Dunlap avenues, you may have noticed construction around the former Metrocenter Mall. Adding light rail is a key part of revitalizing the area and includes the system's first rail-only bridge over a metro Phoenix freeway.

Between the mall’s former entrance and Dillard’s Clearance Center, cars and trucks fill dozens of parking spaces — their owners are operating forklifts, excavators and other equipment.

“They always have the right of way,” Safety Manager Skyler Lopez said before the tour began. “Make sure we get positive acknowledgement, not just eye contact with the equipment. They got dark glasses. Sometimes you may think they see you and they don’t, and we don’t want to take that chance.”

With construction about 60% complete, Valley Metro invited media members to check out light rail’s only elevated platform and the system’s rail-only bridge over a freeway.

“This will be the new end of line,” said Tony Santana. He is overseeing the 1.6 mile extension from the current end of line — at 19th and Dunlap avenues — to the Metro Parkway station, which will be right next to thousands of planned apartments, new restaurants and retail. For this project manager, the work is personal — he grew up with Metrocenter Mall.

“Every time I drove by the I-17 I knew I was near Dunlap when I see Castles N' Coasters,” he said. “Now working on a project like this, when I drive by this project every time I’m like wow, that bridge wasn’t there when I was here, and it’s kind of like, you get that moment of I’m doing something great for the city.”

The station is named after Metro Parkway, a familiar loop to countless teenagers who cruised the mall’s perimeter. The road will remain and a bus transit center will be built below the rail platform.

“By moving this transit center and making it a true transit hub, we’ll have that connectivity from the West Valley to our light rail system that gets you to downtown, that can get you to the airport, all the way out to even Mesa,” Santana said.

As we passed escalators to reach the elevated platform, he pointed out a concrete column with engravings inspired by the desert bloom.

“It’s an ocotillo stem and then at the top we’re going to be painting those red when it blooms for the ocotillo," Santana said.

Seven artists will leave their marks on the project. On the stairs, there’ll be hummingbirds. Along the park and ride, a design nod to an iconic white building with a ribbed cone tower. Known for many years as the Souper Salad restaurant, it’s now a gun shop.

“The hike is worth it,” Santana said before leading us to temporary metal stairs. “From the plaza area to the top it’s approximately 35 feet so we’ll be 35 feet in the air to our platform area.” 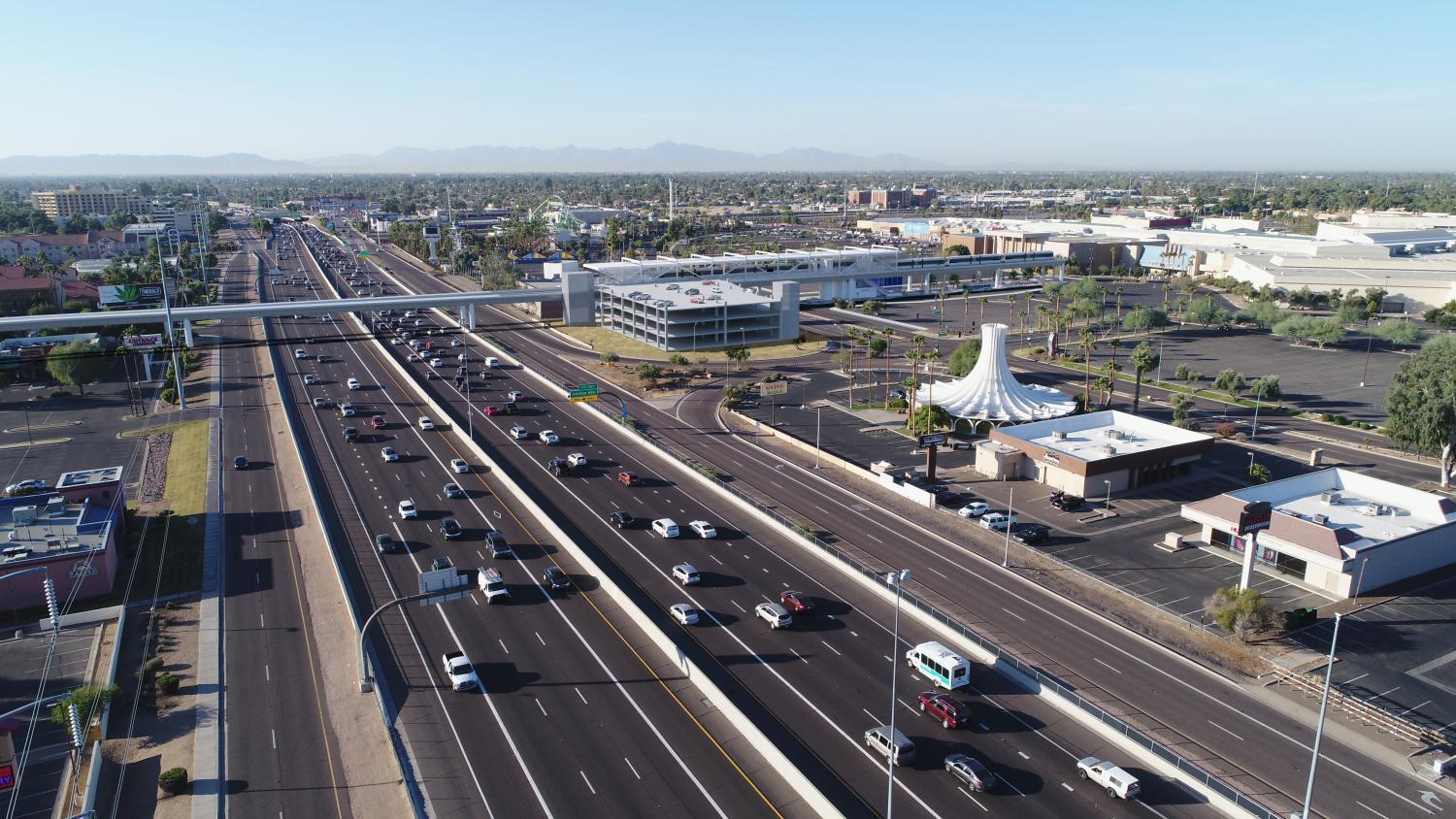 Valley Metro
Rendering of light rail bridge over Interstate 17 looking south. Elevated station and parking garage visible on the west side of the freeway.

I counted 59 steps before reaching the bridge over Interstate 17. After walking over concrete, wood and steel, my eyes soaked in the skyline: from Metrocenter to the freeway to the mountains.

“We should be the highest bridge on I-17,” Santana said. “A lot of those bridges are typically 16.5 feet. From the bottom of our structure, we’re just over 21 feet.”

The bridge spans the entire section of Interstate 17 — that’s 250 feet. Unlike other freeway bridges, this one has no column, thanks to a steel tub design, which Santana said took a lot less time to put in place.

“Having a column there in the middle of the freeway would’ve forced us to do one to two months of work in that center of the freeway rather than close the whole freeway, and get it done in a weekend,” he said.

Some overnight and weekend restrictions will continue into next year. The $401 million project should be completed in early 2024.

According to Valley Metro, since construction began in September 2020, more than 1,200 workers have spent more than 350,000 hours on the project, installing more than 4,000 feet of track.

EDITOR'S NOTE: This story has been modified to clarify that this is Valley Metro's first rail-only bridge over a freeway. 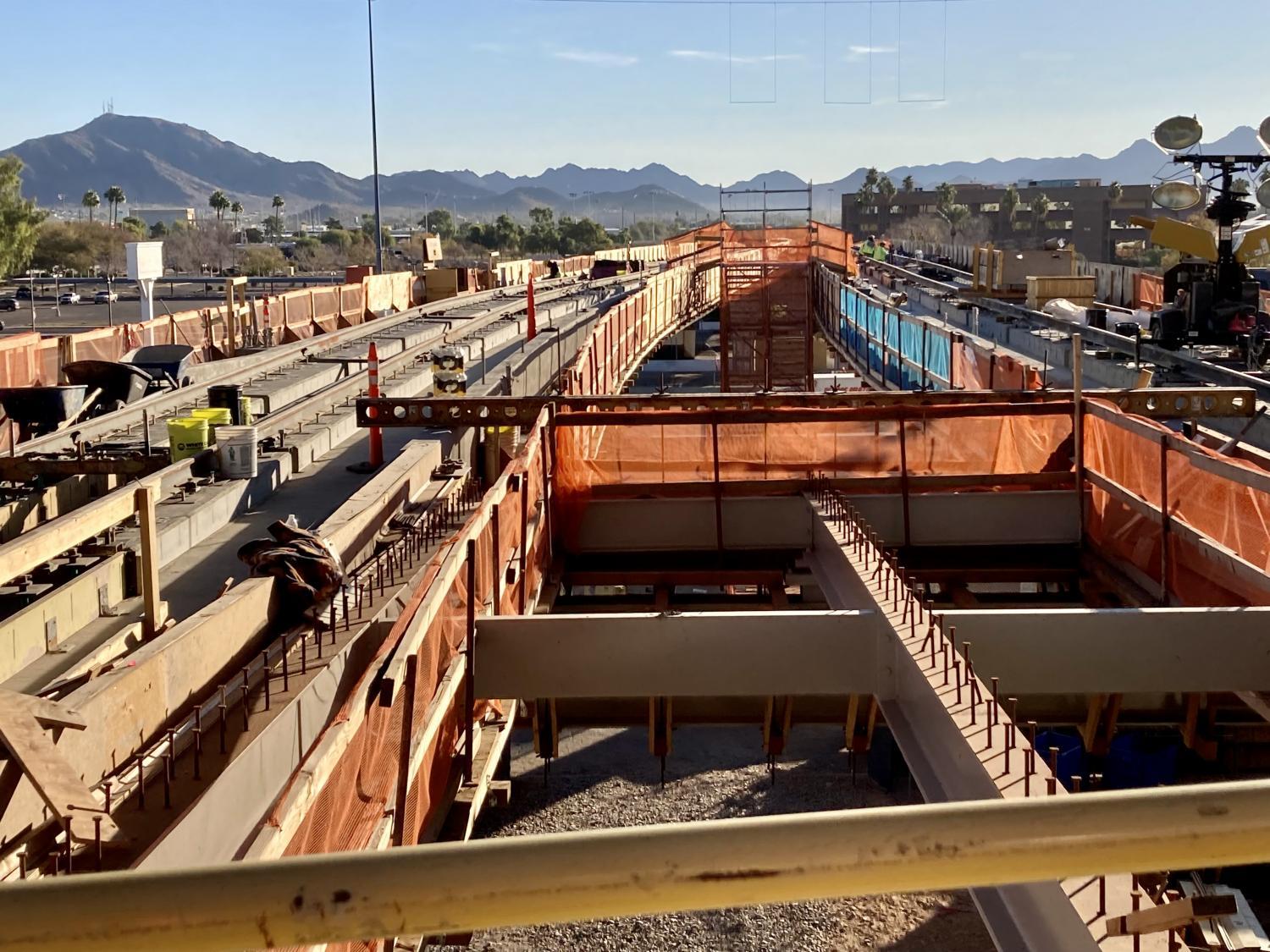