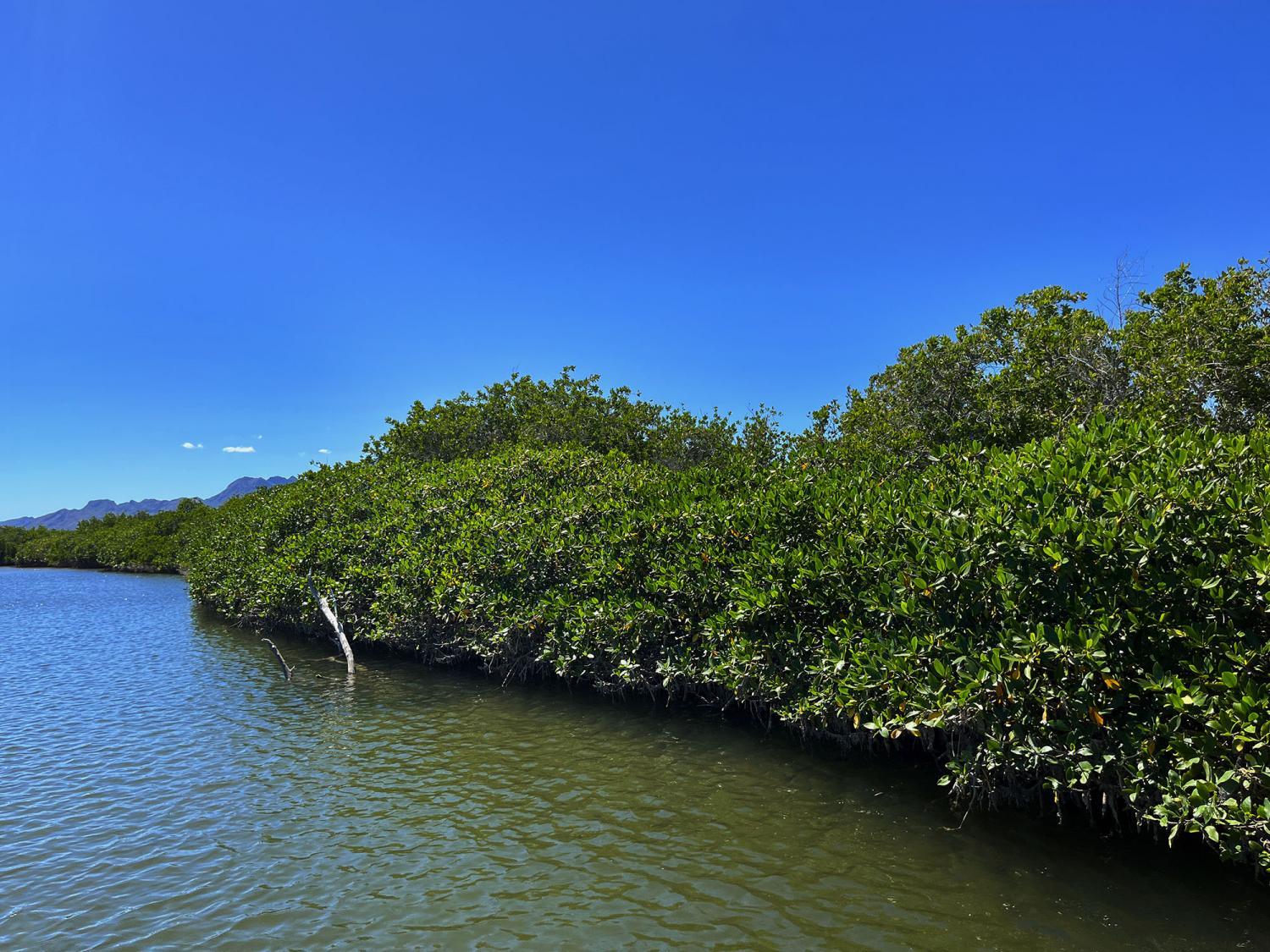 Kendal Blust/KJZZ
Mangoves grow in an estuary on Tiburon Island.

The motor roars on a small blue and white boat, or panga, as Eliseo Barnett begins the short trip from the little town of Punta Chueca to the vast Isla de Tiburón - the largest island in the Gulf of California and part of the Indigenous Comcaac territory.

It’s a warm, sunny afternoon. Waves lash the side of the boat, and wind whips Erika Barnett’s straight black hair across her face as she watches dozens of herons, seagulls and small coastal birds bask in the shallow waters just off the shore.

Beyond them stretches a dense mass of green leaves — part of a huge mangrove estuary on Tiburon Island. It’s one of about a dozen interconnected stands in the Infiernillo Channel. A narrow stretch of ocean between the island and the Sonoran coast, entirely within Comcaac territory, the channel is known for its biodiversity and abundant seagrass meadows and is a protected wetland area.

A local conservation leader, she compared the mangrove forest to a nursery, providing a protected habitat for important marine species like crabs, shrimp and fish, as well as birds and sea turtles.

That’s important for a fishing town like Punta Chueca.

“Our father, our grandfathers, maybe our sons, our brothers, they are all fishermen,” Barnett said. “So we are committed to helping the environment, the sea.” 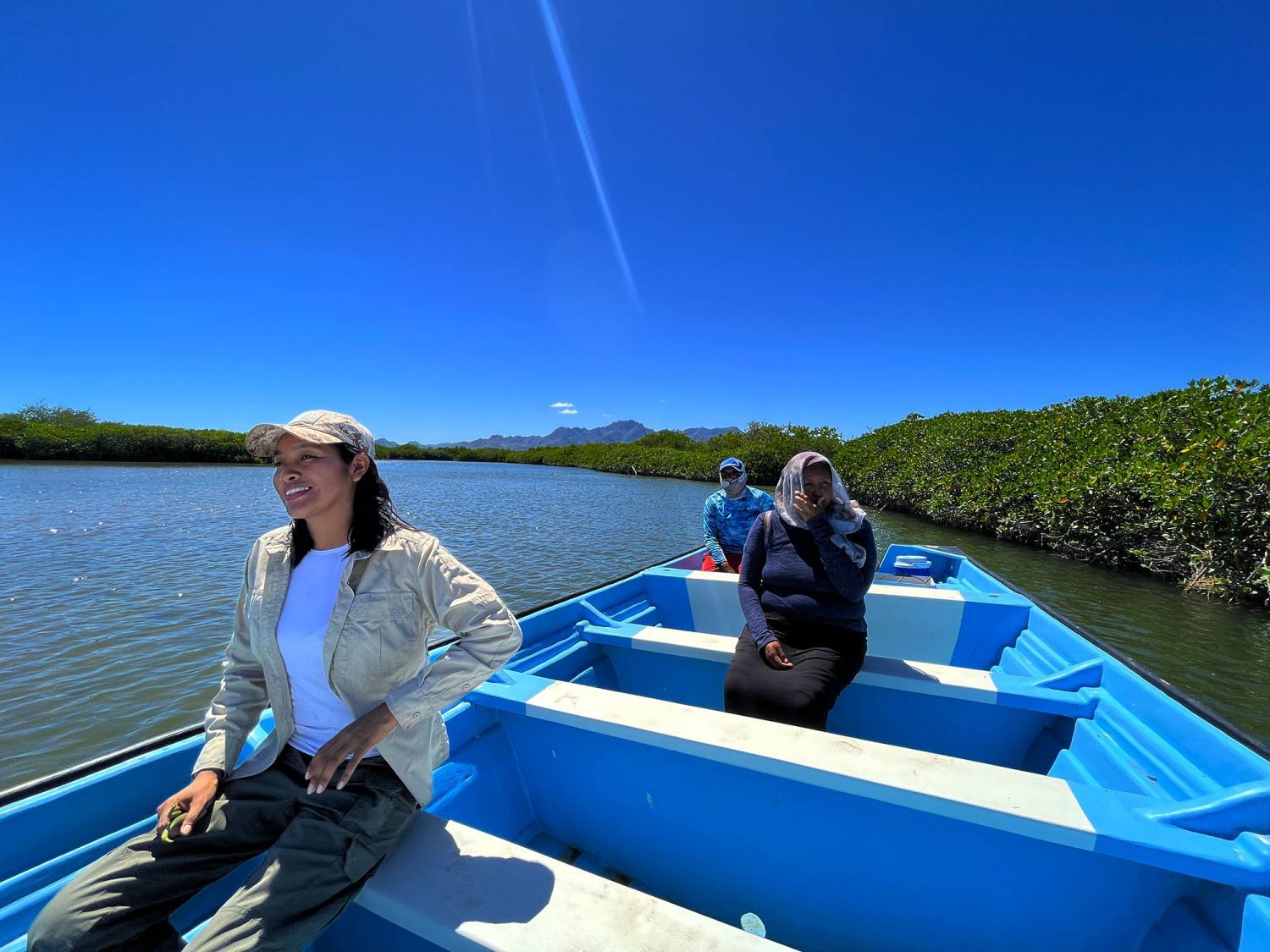 Kendal Blust/KJZZ
Erika Barnett and other members of her conservation team visit an estuary on Tiburon Island on Sept. 14, 2022.

“If mangroves die out, so does fishing,” added Eliseo Barnett, Erika’s cousin and a member of her conservation team.

His family’s livelihood depends on the species that shelter in the mangroves’ tangled roots, he said. More than that, caring for this region is a value passed down from his ancestors and that he hopes to pass on to his own children.

“So we are a small group, but we’re doing big things,” he said with a chuckle.

It all starts with collecting mangrove propagules — the long, slender green and brown stalks that grow from mangrove flowers — from the estuaries and beaches in the Infiernillo Channel.

Walking along the beach on Tiburon Island, Erkia Barnett occasionally stoops down to pick up a stray mangrove propagule.

She collects the ones that wash ashore.

“It’s really important to pick them up from the beach because those are the ones that dry out,” she said. 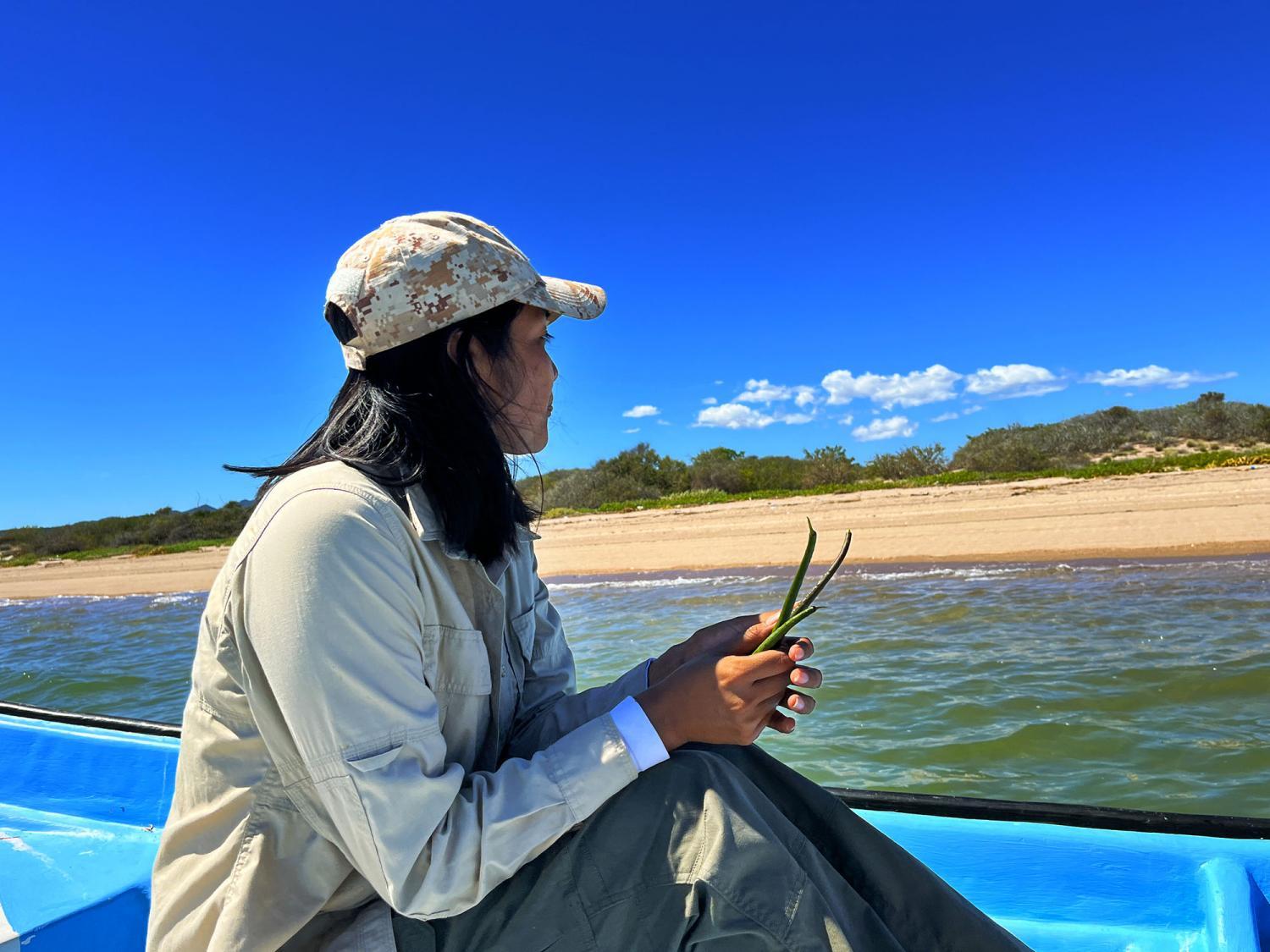 Rescuing them is an idea that came to her years ago, watching them wither on the beach near her childhood home, which she says has since collapsed due to rising sea levels in the area.

“It occurred to us to pick them up and keep them” until they sprouted roots, she said. After propagating the plants, her family took them to the El Paraiso estuary nearby.

The conservation team’s current project is much the same — collecting, propagating and reforesting the plants — but on a larger scale. This year, they collected more than 6,000 plants from the channel.

So far, they are only propagating red mangroves, though black and white species also grow here.

“The three types are all important because, you know, they are companions,” she said. “Eventually we will reforest all of them.”

But they’re starting with red mangroves, she said, because they are the easiest to propagate. 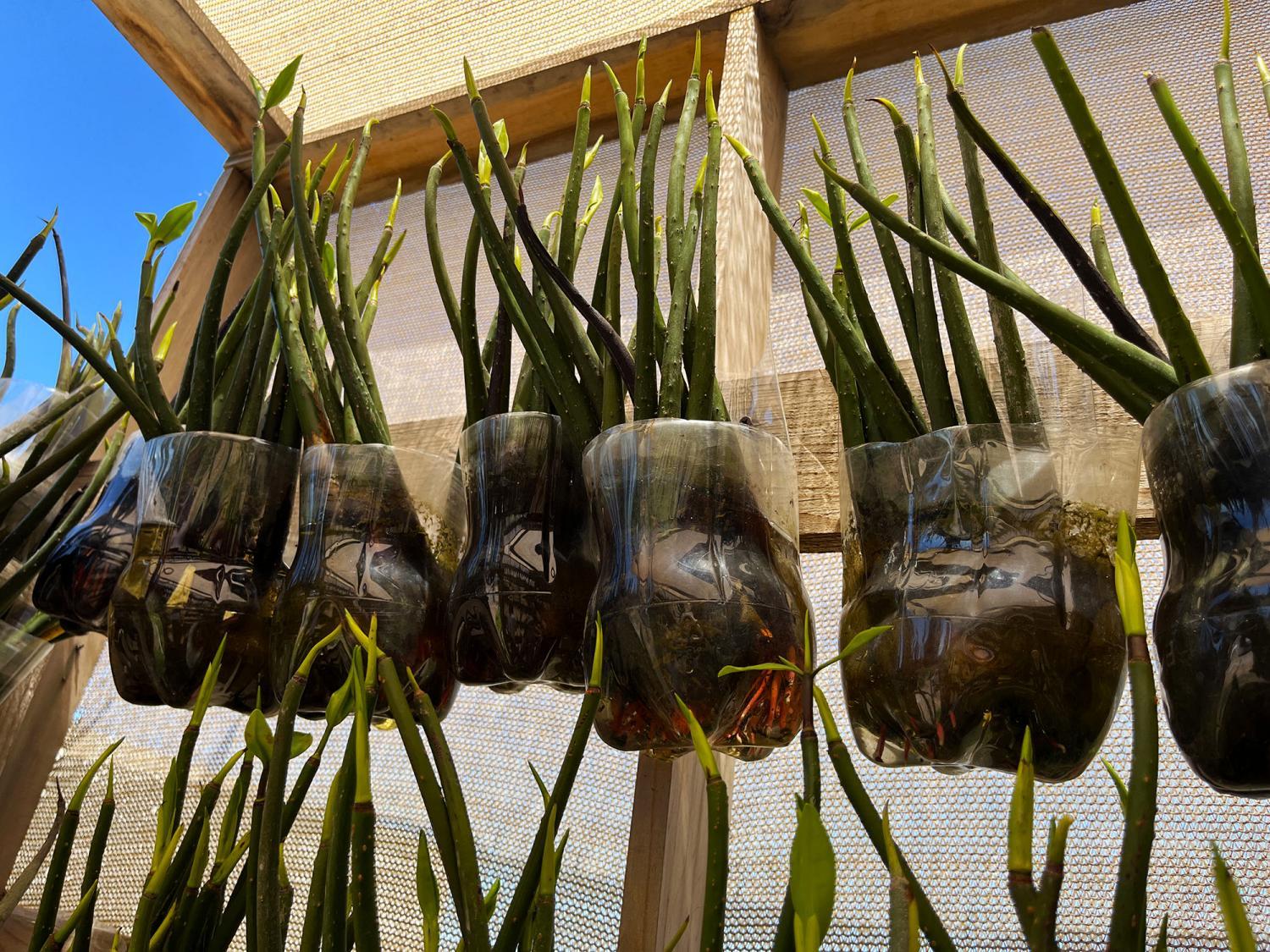 “Climate change is one of the biggest factors impacting the mangrove forests,” Barnett said.

Increased heat, drought and rising sea levels are all taking a toll on the plants.

“It is the extreme of extremes, my goodness,” said ecologist Laura Smith Monti, with the Arizona-based Borderlands Restoration Network and The University of Arizona. “The mangroves stands in the Infiernillo Channel are the northernmost mangroves that occur on the West coast for sure.”

Mangroves here push the bounds of heat and drought the plants can withstand. Climate change will test those limits even further.

But this interconnected system of mangroves provides critical habitat; sequesters large quantities of carbon dioxide and protects coasts from erosion. And so far, the stands in the Infiernillo Channel are relatively healthy, likely because the protection afforded by the Comcaac community, Monti said.

The Comcaac have relied on these mangroves for thousands of years — using them as a source of food, medicine and building materials. The dense forests even provided refuge for their ancestors who hid in mangroves to avoid being killed or captured by Spanish colonizers.

But the work to preserve and protect the plants takes time and money, and Monti wants the community to benefit from its conservation work.

“They should be paid for taking care of this little place on earth that is so important,” she said. “I see it as a way to generate conservation jobs into the future, and for young people to see it as a viable employment option.”

That isn’t an easy feat. But a grant from the 11th Hour Project did provided the funds to build the simple greenhouse where Barnett and her team grow their plants. 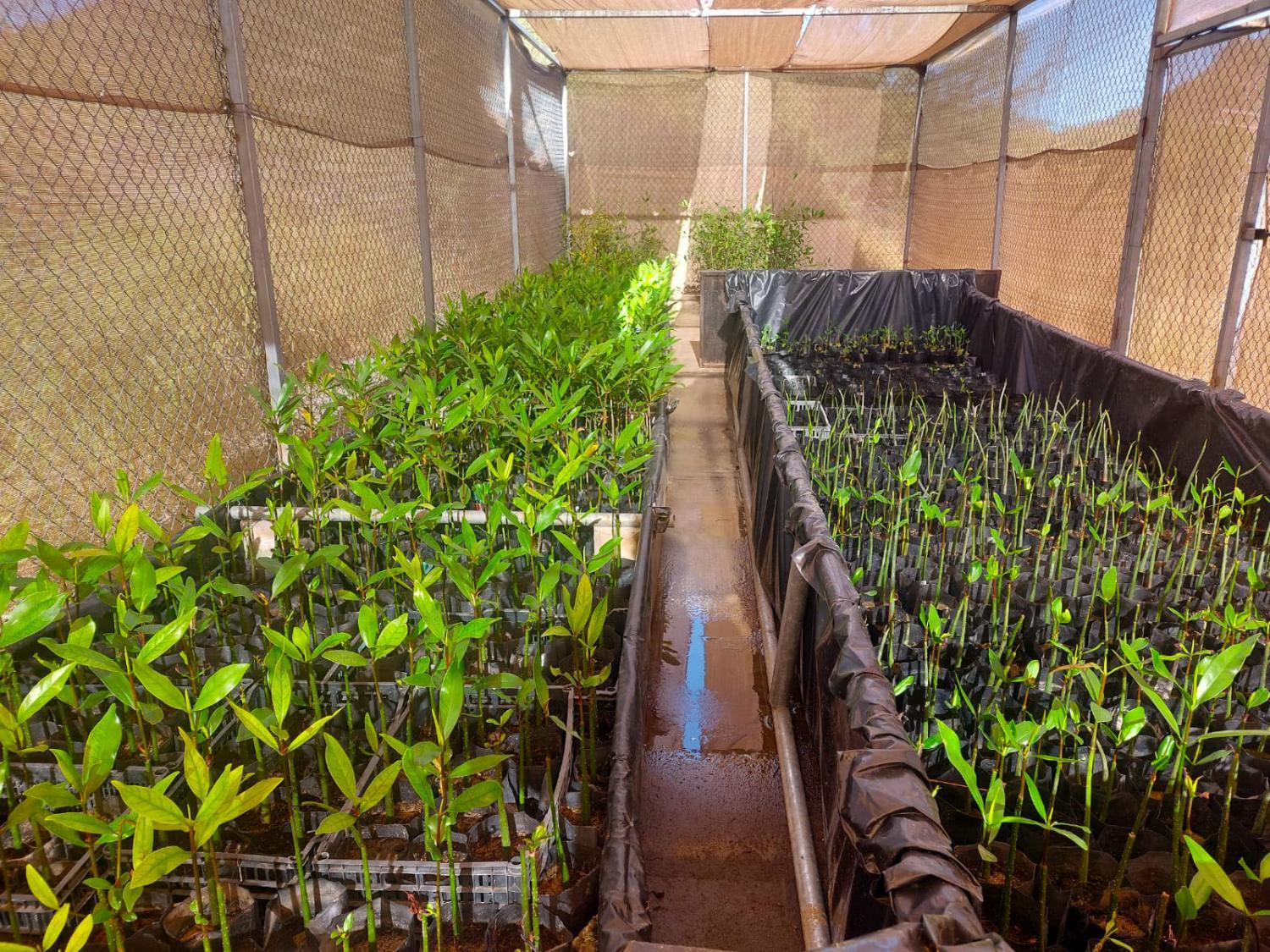 Milka Valenzuela
Mangroves grow in a greenhouse at the El Soldado estuary in Guaymas, Sonora.

Inside the small wooden structure, halved Coke bottles are strung up in neat rows from floor to ceiling on every wall, filled with thousands of plants.

A cat named Chocolatita dozes in one corner — Barnett calls her the greenhouse guardian.

“Every so often you have to separate them like this,” Barnett says, pulling some of the plants out of their makeshift pots, demonstrating how she separates their red roots - keeping them from becoming tangled and difficult to plant.

“We’re learning a lot,” she said of the careful process.

This year, after the plants grow large enough in the water-filled Coke bottles, they will be transplanted into soil for another six months or so — a new technique Barnett learned from one of the few other mangrove conservation teams in the region. She hopes it will help with strong currents and fluctuating tides in the Infiernillo Channel that have washed away smaller reforested plants.

“It’s something relatively new,” said Milka Valenzuela, who has been running the mangrove reforestation project at the El Soldado estuary near the beach town of San Carlos since 2017. 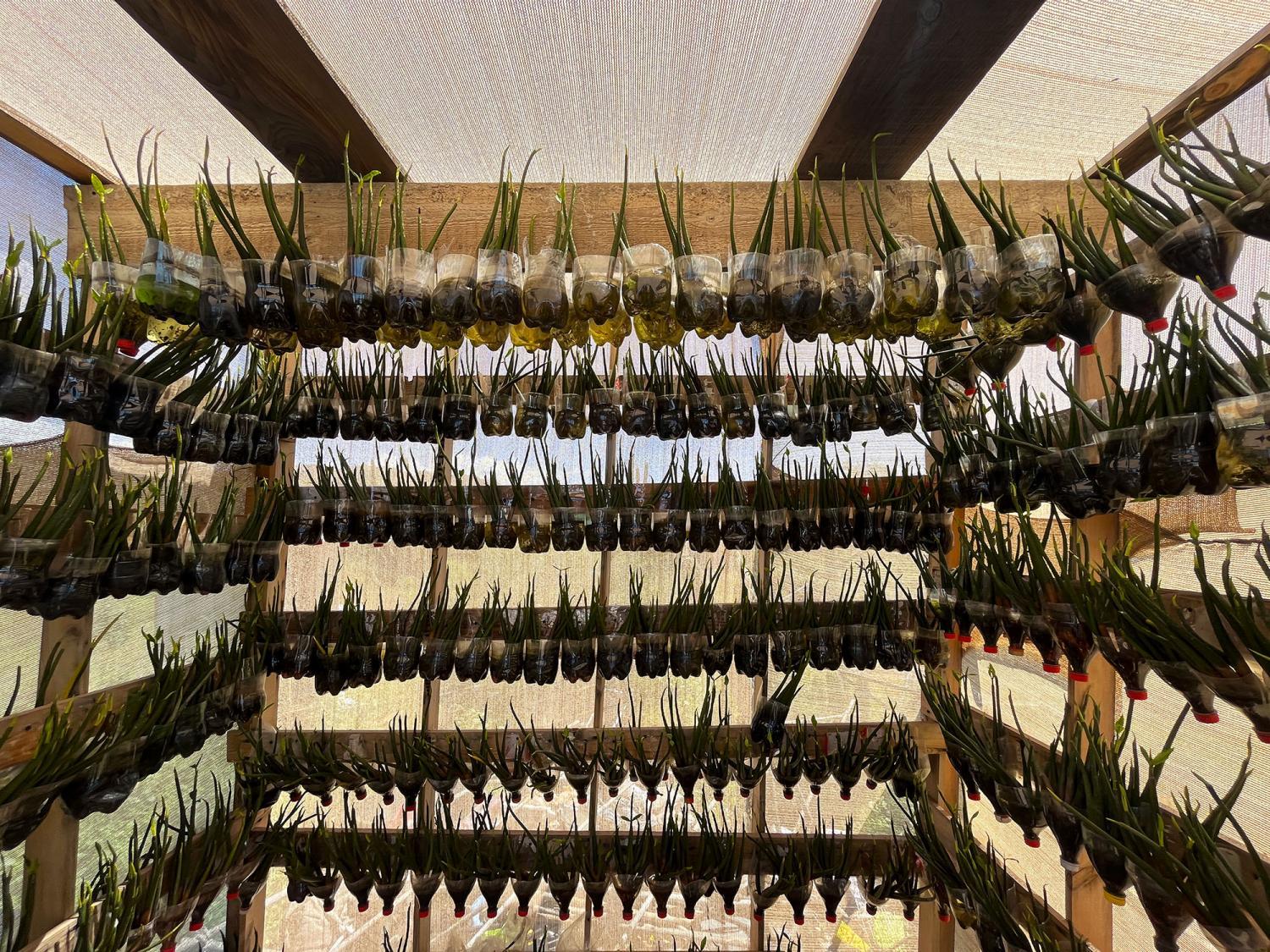 Reforestation is challenging. And the hot, arid climate has meant using different strategies than mangrove restoration projects in other parts of the world, she said. When her project started, they didn’t have much of a guide to follow. But they’ve found a method that works.

More than 75% of the plants Valenzuela has propagated in recent years have survived in the mangrove stands, she said.

Earlier this year, Barnett visited that project to bring some of the best practices back with her to Punta Chueca.

Looking out at the mangroves on the Tiburon Island, she said she’s determined to make this project work. Both for the plants and for her community.

“I want to continue so that my children and my nieces and nephew might want to follow my example and continue taking care of the mangrove and the environment here in our territory,” she said. “Because this ecosystem is important now just for our people, but for the world.” 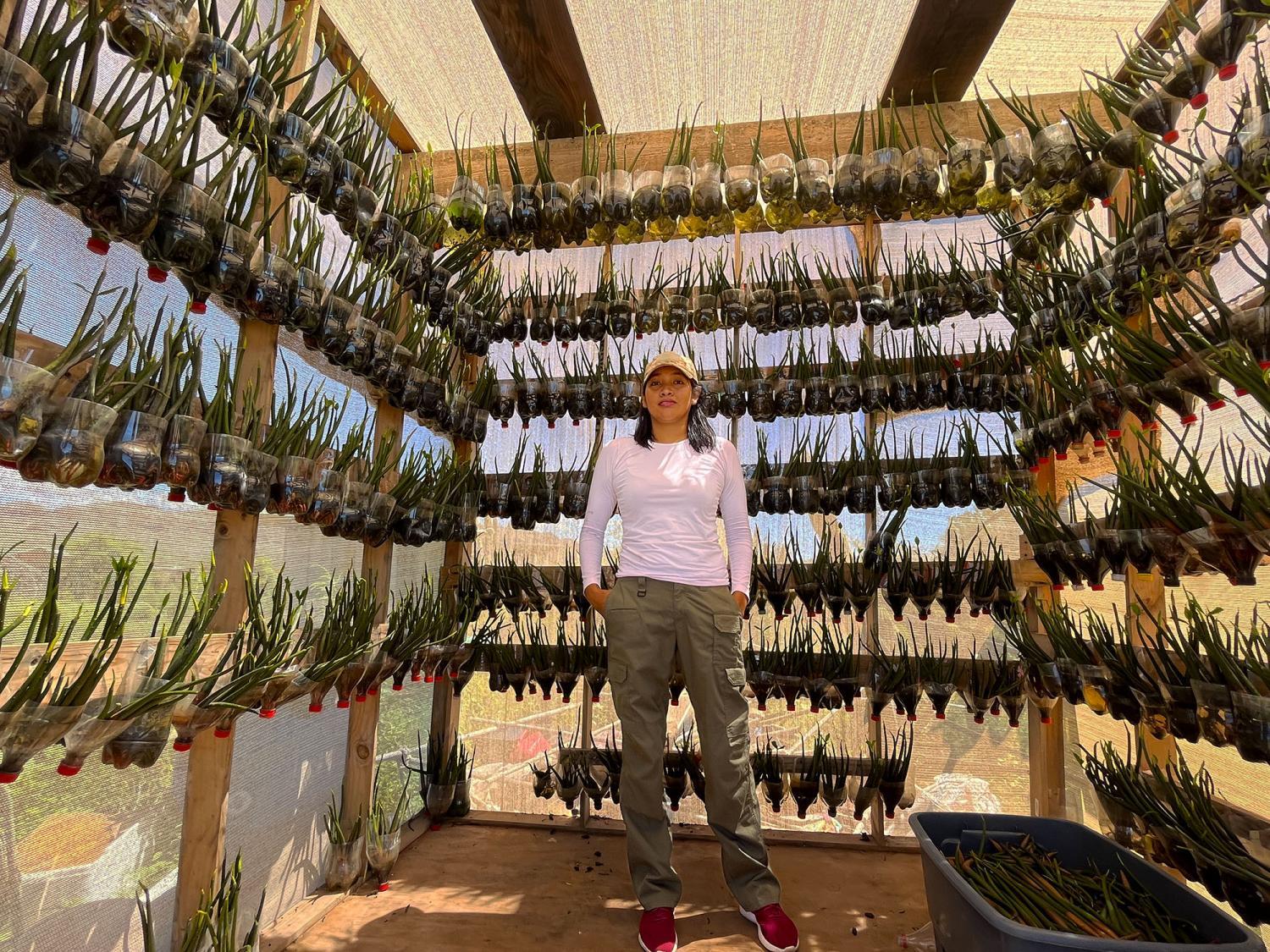 Kendal Blust/KJZZ
Erika Barnett stands in the small greenhouse where she and her team propogate mangroves. 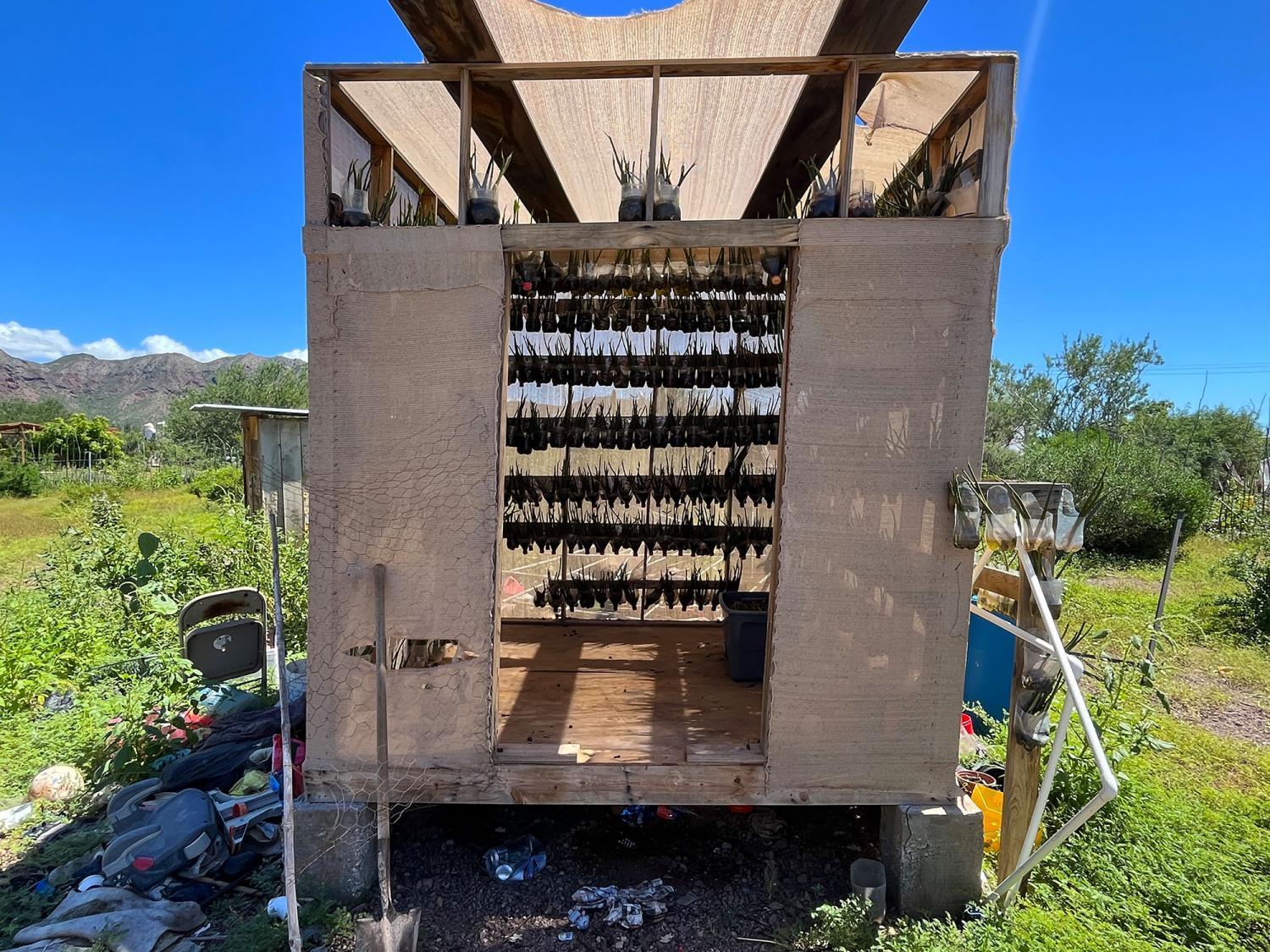 Kendal Blust/KJZZ
The mangrove greenhouse is a small wooden structure built outside of Erika Barnett's home. 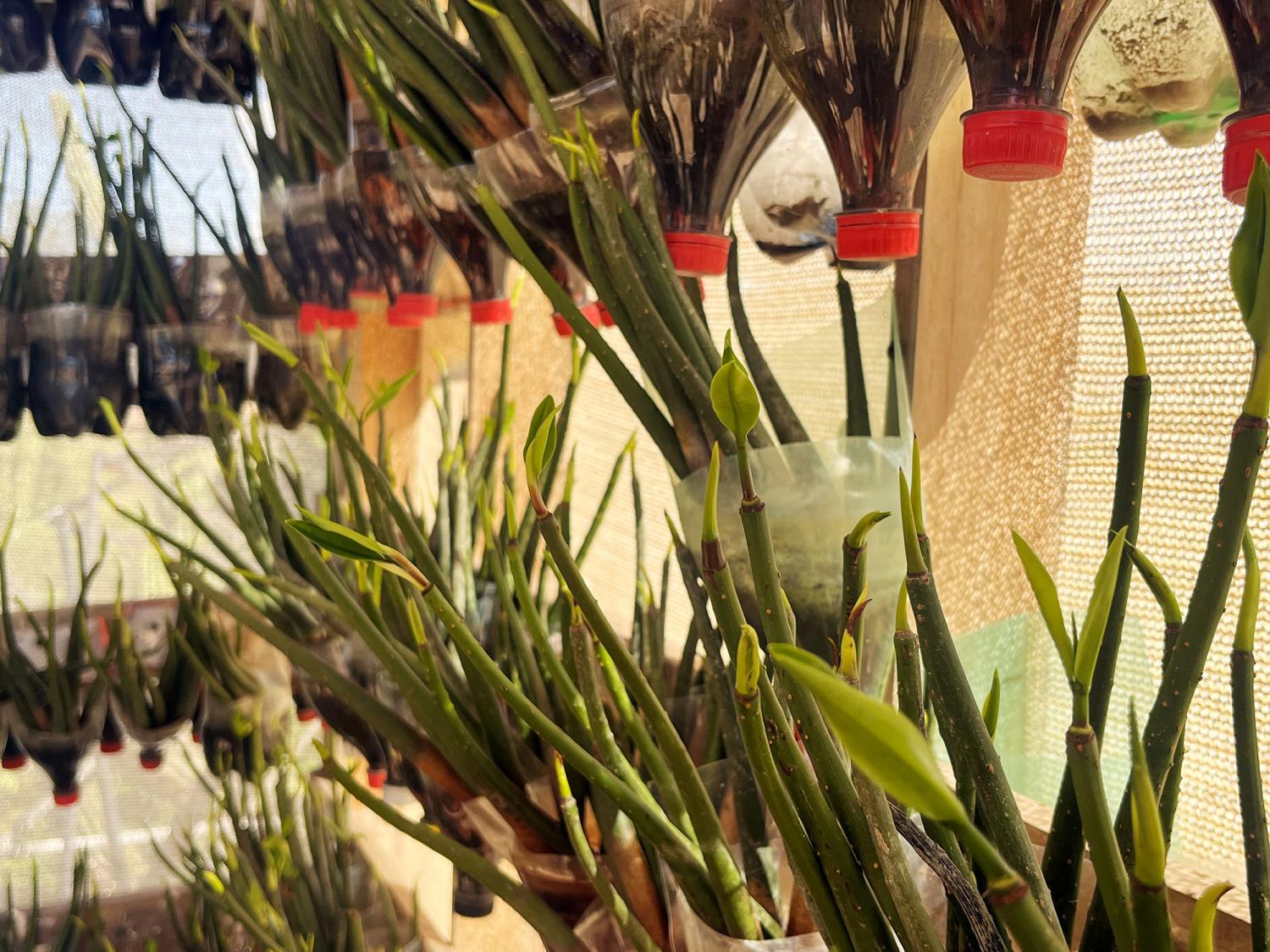 Kendal Blust/KJZZ
Some of the mangroves in the greenhouse have started sprouting leaves. They can usually be planted once they have at least four leaves. 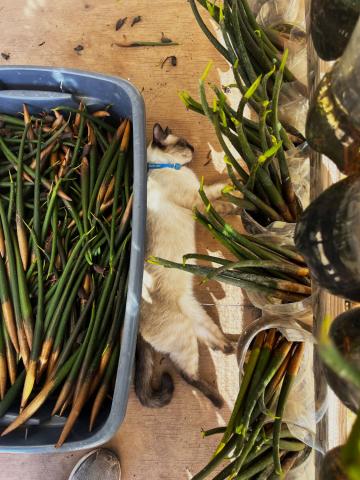