Before Steven Spielberg was a household name, he was a Phoenician. Clarke Riedy recalls those days

It’s hard to imagine that there’s anyone out there who doesn’t know something about Steven Spielberg — if only through movies like "Close Encounters of the Third Kind," "E.T.," "Indiana Jones and the Raiders of the Lost Ark" and now "The Fabelmans," Spielberg’s semi-autobiographical film that focuses in part on the filmmaker’s childhood in the Valley.

Around here, you can find a few folks who know a little more — assuming their recollections are sound.

The Spielbergs lived in Phoenix for seven years, first arriving when he was 10 years old. Steven attended Ingleside and later, Arcadia High School. His family moved to California in 1962 before he graduated.

A quick ask on an Arcadia alumnae Facebook page yielded all kinds of stories about Spielberg’s early — and we mean really early — film career.

Several people recalled watching movies at Spielberg’s home, though there was heated debate over whether it was in the basement (unlikely in Phoenix) or backyard, and if the admission price was 5 or 10 cents. Someone remembered selling popcorn at the screenings. There might have been a production of "Peter Pan," starring neighborhood kids.

Clarke Riedy recalls growing up in Spielberg’s neighborhood, and, through an audio postcard, he shares a few memories — and theories — of his own.

"The Fabelmans" will release in theaters nationwide Nov. 23. 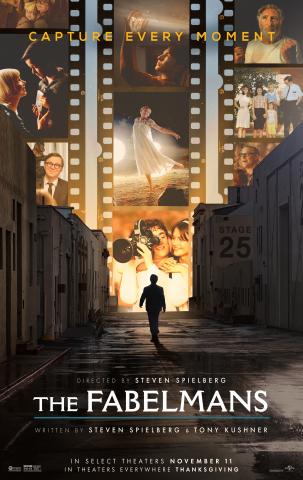