Older adults living with HIV or AIDS often struggle with isolation. This group aims to change that

Download mp3 (7.55 MB)
Coverage of aging is supported in part by AARP Arizona 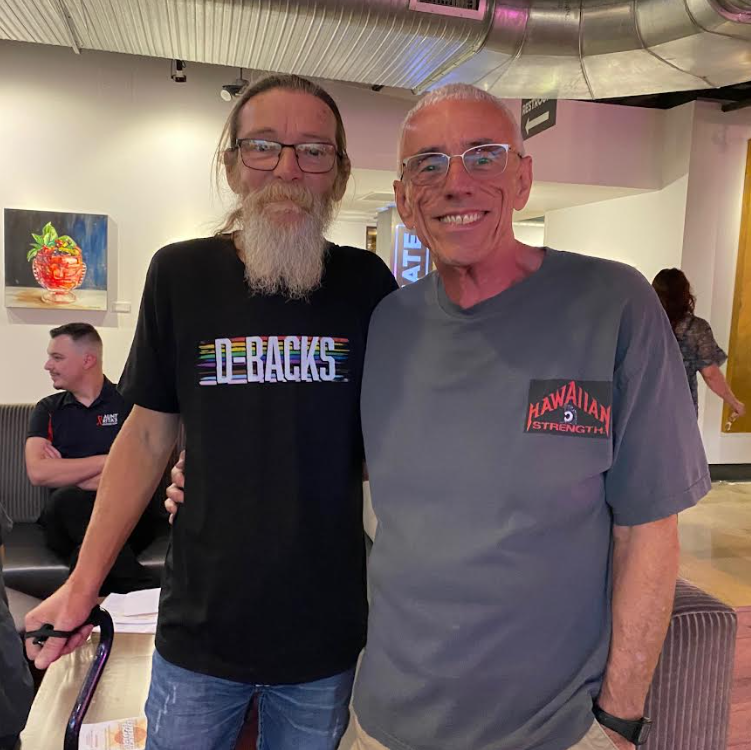 Kathy Ritchie/KJZZ
Glenard Malcom, 57, and Chris Daley, 69, remember the horrors of the early days of the HIV epidemic. On this night, they're enjoying food, friendships and lots of laughs.

Our next story is one of perseverance and hope. Older adults living with HIV or AIDS are often isolated. Many lost entire friend groups to the virus or have been shunned by family. And making connections later in life, even platonic ones, can be difficult with an HIV diagnosis. Now one Valley organization is doing something to get these seniors out and about.

It’s a Thursday night at Match Market and Bar in downtown Phoenix. A group of mostly men and some women have gathered near the back. There's food, music is playing and people are laughing and talking.

"So Experienced Escapades is a new program that we started this year. It is a monthly outing for people living with HIV, over the age of 50," explained Juan Lopez, director of Programs with Aunt Rita’s Foundation, an organization dedicated to ending the HIV epidemic while supporting those living with the virus.

"And during the pandemic, and COVID-19, everything really shut down," he said. Like those valuable in-person support groups. "So this was our push to fight that isolation that a lot of these people face."

But even before COVID-19, HIV elders were often shunned — even within the gay community. Kent, who asked not to use his last name, is 67.

"So when I go to gay parties, and I meet somebody, and they want to hit on me, I tell them I'm positive. And then that just, you know, you're cut off immediately. They just literally say, 'well, thanks but no thanks.'"

But when he comes here, "We've already established that we're all positive and you don't have to go through that horrible explanation. So we just accept it. And this is our crowd that we deal with. And if you want to find social activities, or a sexual partner or friends, it's right here," he said.

Kent was diagnosed in 1984 when he was in his late 20s. It was the early days of the HIV epidemic.

"I was in the doctor's office and I started crying. He says 'oh,' he patted me on the knee, 'don't worry about it. You still have two years to live.' That's what he told me," Kent said.

"I was in the doctor's office and I started crying. He says 'oh,' he patted me on the knee, 'don't worry about it. You still have two years to live.' That's what he told me."
— Kent

"Yeah, I didn't even bother to plan for retirement because I figured if I got to the year 2000, I was gonna be really surprised," said 69-year-old Chris Daley. He was diagnosed in 1989. "This was back up in San Francisco. And they said, ‘I'm sorry, but you have about a year to live.’"

"Doctors wouldn't even come into rooms, and if they did, they had the entire hazmat suit on," he recalled. "Food trays would be left outside because no one wanted to go into the room, because no one knew how it was spread."

In fact, his partner was one of the first to be diagnosed when HIV was called Gay-Related Immune Deficiency, or GRID. "He was, I think, he was patient number eight in New York, with GRID," said Malcolm.

And there were no treatments then. AZT hadn’t come out yet, and when it did, it just made people so sick. "It was worse to be on AZT than it was to be HIV positive, almost," said Daley.

Throughout the epidemic, Both Daley and Malcolm watched friends — chosen family — die.

"I've lost a lot of friends," said Daley. "A lot of the a lot of the crew that was around the same time as I was infected, most of them are gone. We've lost a whole generation. You know, in my age group, a lot of most of us are gone."

"I used to go with my partner … every week, we were going to somebody's funeral and memorial service. He was one of the lucky ones," said Malcolm referring to his partner. That's because he lived. Still, survivors were often used as guinea pigs.

"You know, the constant experimental drugs — DDI, D4T, 3TC, it was an endless. You know, they’re just trying things," he said.

When COVID-19 hit, survivors of that epidemic were taking no chances with this pandemic, until recently. Which brings us back to this night. Meet 66-year-old Jim. Like Kent, he wasn’t comfortable sharing his last name.

"And so I've been coming to this just so I don't feel alone," he said.

So Experienced Escapades is like this refuge, because the stigma of being HIV positive still lurks, even if a person's viral load is undetectable, making it impossible to transmit.

"I don't want to have to go through telling everybody and having to deal with their issues about it," explained Jim.

Including his own family, who still doesn’t know that he has HIV.

"I feel like my generation, we were closeted with everything. It's certainly not like it is today," he said.

So when he got his diagnosis in 1990, "I was so used to being closeted, I just kept that in the closet, too. So that's my comfort zone."

For this group, life was never a guarantee — even in youth, when there's that sense of invincibility. And that's why evenings like this one, where people can connect and just be themselves, matter so much to these survivors.