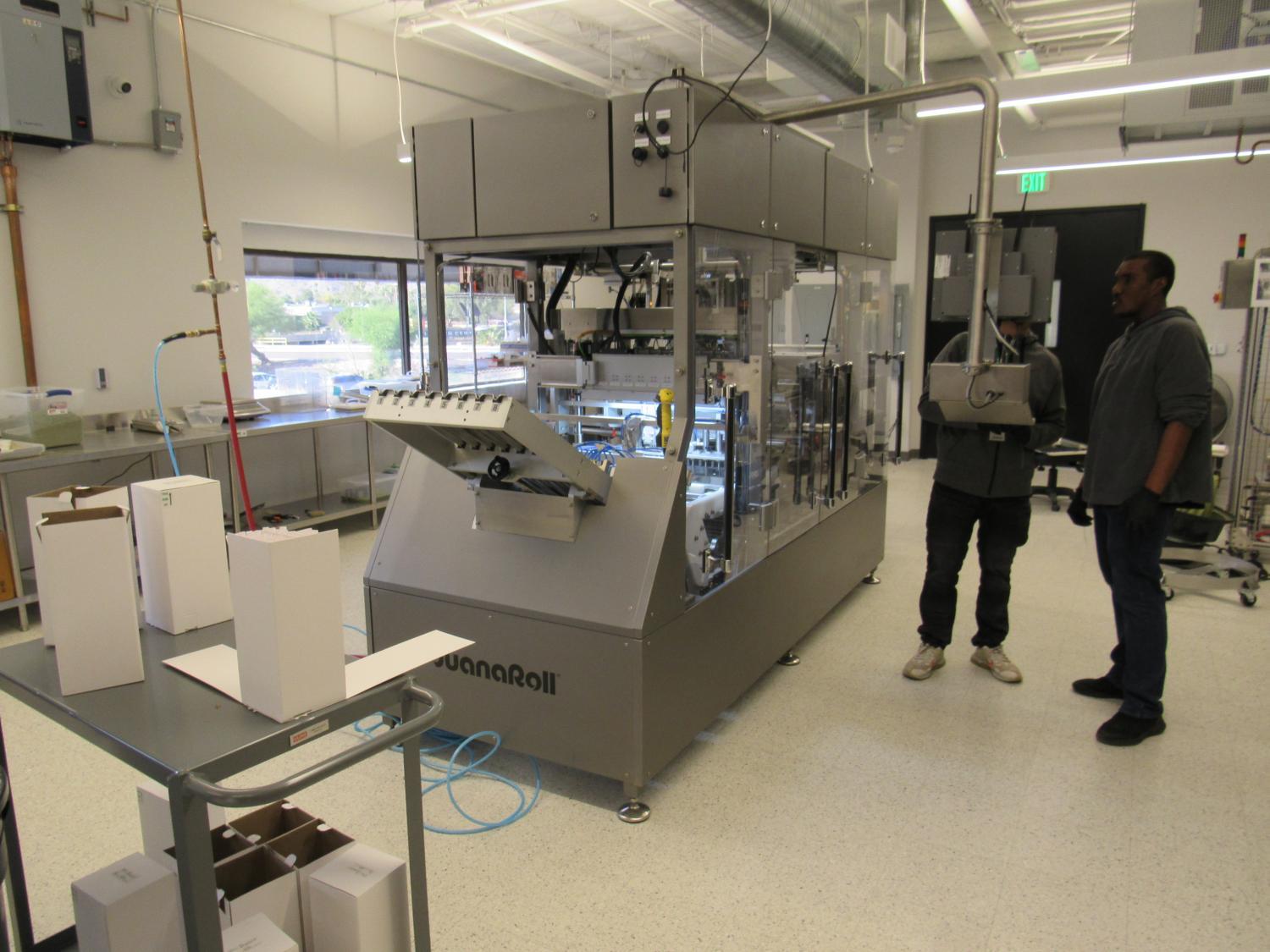 Matthew Casey/KJZZ
Employees of the Flower Shop AZ monitor a machine able to roll thousands of joints an hour.

Picture a large rectangular machine roughly the size of a toll booth that looks like it came straight from Willy Wonka’s chocolate factory.

Only the contraption is run by technicians instead of Oompa Loompas, and it makes joints instead of candy.

The sound of it running is heard throughout an Ahwatukee office building that’s being transformed into a manufacturing hub with a retail dispensary.

“This [machine] is like a Ferrari,” said Greta Brandt, president of the Flower Shop AZ.

To be clear, Brandt compared her machine called Juanaroll to an Italian sports car with a six-figure starting price.

Spliffs are not the only marijuana product that Brandt’s company is learning how to make in bulk.

“There is automation that is placed down in our drink line, our gummy production, our mint production and our hard candy production. Everything has turned into automation,” she said.

Adults buying and consuming marijuana has been legal in Arizona for almost two years. A need to industrialize these processes means people are spending lots of cash on pot.

Part of the tax on every joint Brandt sells goes into a state account called the justice reinvestment fund. Proposition 207 authors gave Arizona a permanent obligation to pay for namesake programs with cannabis money.

“It’s going to be continuously funded,” she said.

Biannual treasury disbursements from the account have totaled about $17 million so far. Recipients are state and county health departments, and they’re soon due to get another remittance. But officials haven’t spent much of the money yet.

Brandt, who is also a lawyer, had input on the drafting of Proposition 207.

“Because we had already made the concessions to get the opposition on our side,” said Brandt.

One such compromise was that Proposition 207 did not create an entirely new department of state government to regulate marijuana, like Proposition 205 would have in 2016.

“We heard back from stakeholders that they didn’t, from the governor’s office, that they did not want another agency overseeing this,” said Brandt.

So recreational marijuana was tasked to the Arizona Department of Health Services because it already ran the medical program.

“And really it requires the Department of Health to ramp up its hiring, the infrastructure to be able to facilitate a lot of these new programs that they were never equipped for,” said Brandt.

Still, state health officials have made a system to erase peoples’ convictions for certain marijuana offenses, and they’ve raffled off dispensary licenses to a few people considered the most harmed by cannabis prohibition.

But justice reinvestment has had to wait as Proposition 207 does not have a deadline for officials to start up the program. Right now, it’s in development.

Darren Chapman removed a chain from a gate into a community garden on Broadway Road where his nonprofit called Tiger Mountain Foundation has for years grown health and nutrition. He calls the garden an alternative to fast food for people on foot in a very poor ZIP code.

Tiger Mountain Foundation leads a variety of projects in south Phoenix, where Chapman sees empty lots as symbols of busted ambitions and dreams. He imagines them transformed to fields of opportunity. Money from legal marijuana sales would mean stability to plan long-term.

“We want stimulus and support to go directly to folks who can actually make the change, and that’s been kind of the big stink around this Prop. 207,” said Chapman.

The measure authorizes nonprofits working on justice issues, such as career training for people prosecuted for marijuana that’s now legal, to draw grants from the namesake fund via public health departments.

Chapman’s group is part of a network of causes waiting for the money to become available.