They were an elite women's unit of the Afghan military. Now they're fighting to stay in the U.S. 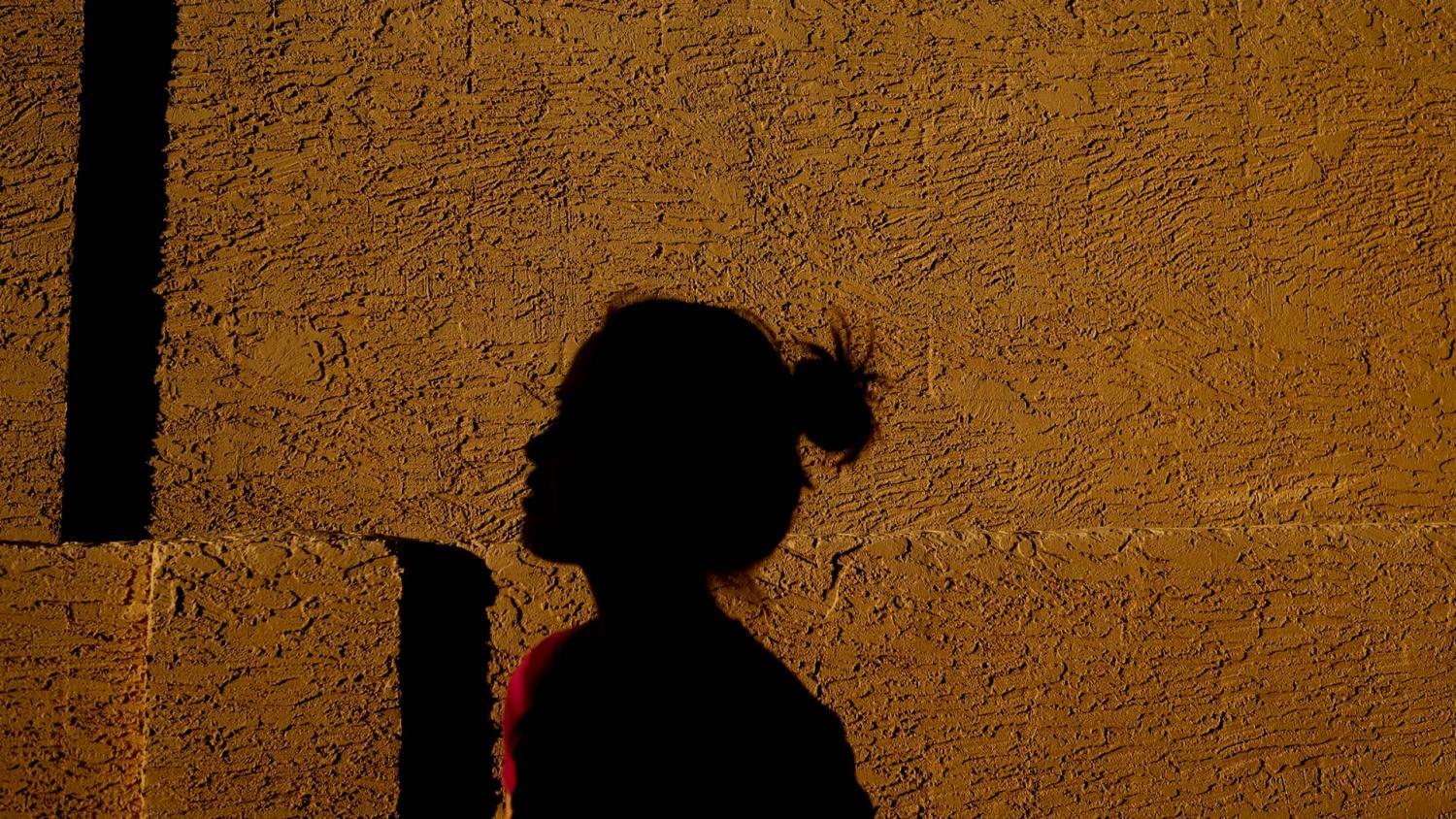 Alisa Reznick/KJZZ
A spent a day crowded into the Kabul airport waiting for an evacuation flight out of the country last fall. Now she and other platoon members are spread out across the U.S.

Packed into a crowd waiting for an evacuation flight outside the Kabul airport,  a young woman was thinking about her family.

“I called my parents and I said, ‘I’m sorry, because I didn’t [see] you guys, and I’m getting ready to go, I’m leaving Afghanistan,’” she said.

It was August 2021. She’d been in the Afghan military for five years by then, including three with an elite, all-women unit called the Female Tactical Platoon, known as FTPs for short.

Her parents had a hard time accepting her job. She’d left university to pursue it, and they worried about her. That call from the airport was the first time she ever heard her dad cry.

Talking about it now,  in a Tempe apartment she shares with other former soldiers, A’s brown eyes are glossy, too. Emotion catches in her throat.

It's been more than a year since some 80,000 people were evacuated from Afghanistan after U.S. troops withdrew and Taliban forces took control of Kabul. 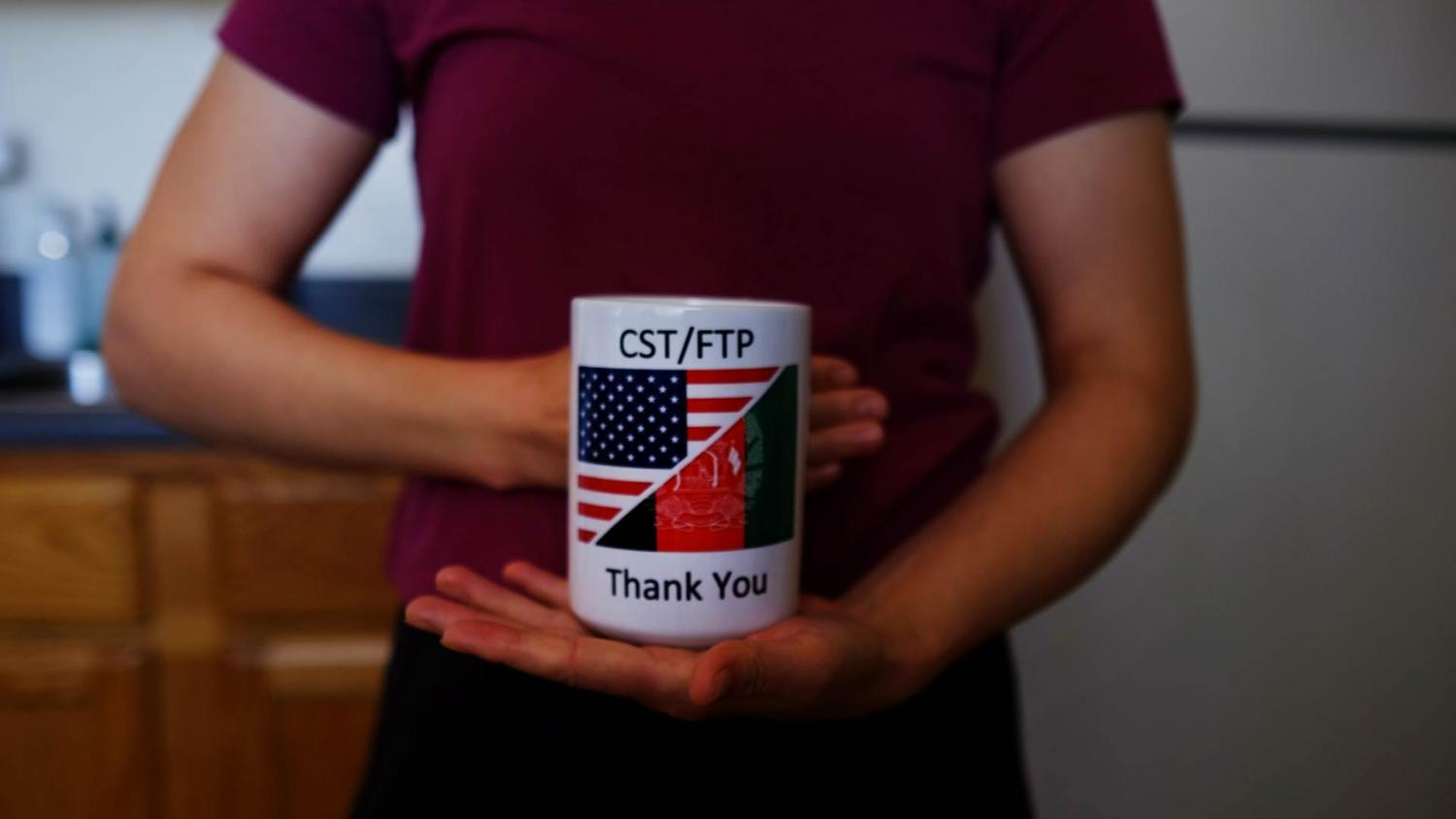 Alisa Reznick/KJZZ
A holds a mug made by Richardson commemorating soldiers from the Female Tactical Platoon, or FTP, and the Cultural Support Team, or CST — a mostly-women unit within the U.S. military that worked with the FTPs.

After hours of harried messages, a long wait at the airport, then weeks at U.S. military bases, A made it to Tempe. We’re only using her initial because some of her family is still in Afghanistan. They’re Hazara, an ethnic and religious minority group that faces an even greater threat under Taliban rule. She says talking about her work could put them in even more danger.

A is a little over five feet tall, with a round face and straight hair pulled into a bun. As an FTP, she joined U.S. and Afghan Special Forces on high intensity night missions, questioning Taliban fighters and people thought to be connected to them.

The female platoon did what male soldiers culturally could not — search and speak to women and kids. It's what made her a specific target when the Taliban seized control last year.

“We assumed that the FTPs would be part of the operation to evacuate,” said Bill Richardson, a Marine veteran and retired police detective in Phoenix. “But then we discovered that they were not part of the discussion, there was no mention of them, they weren’t on anybody’s radar.” 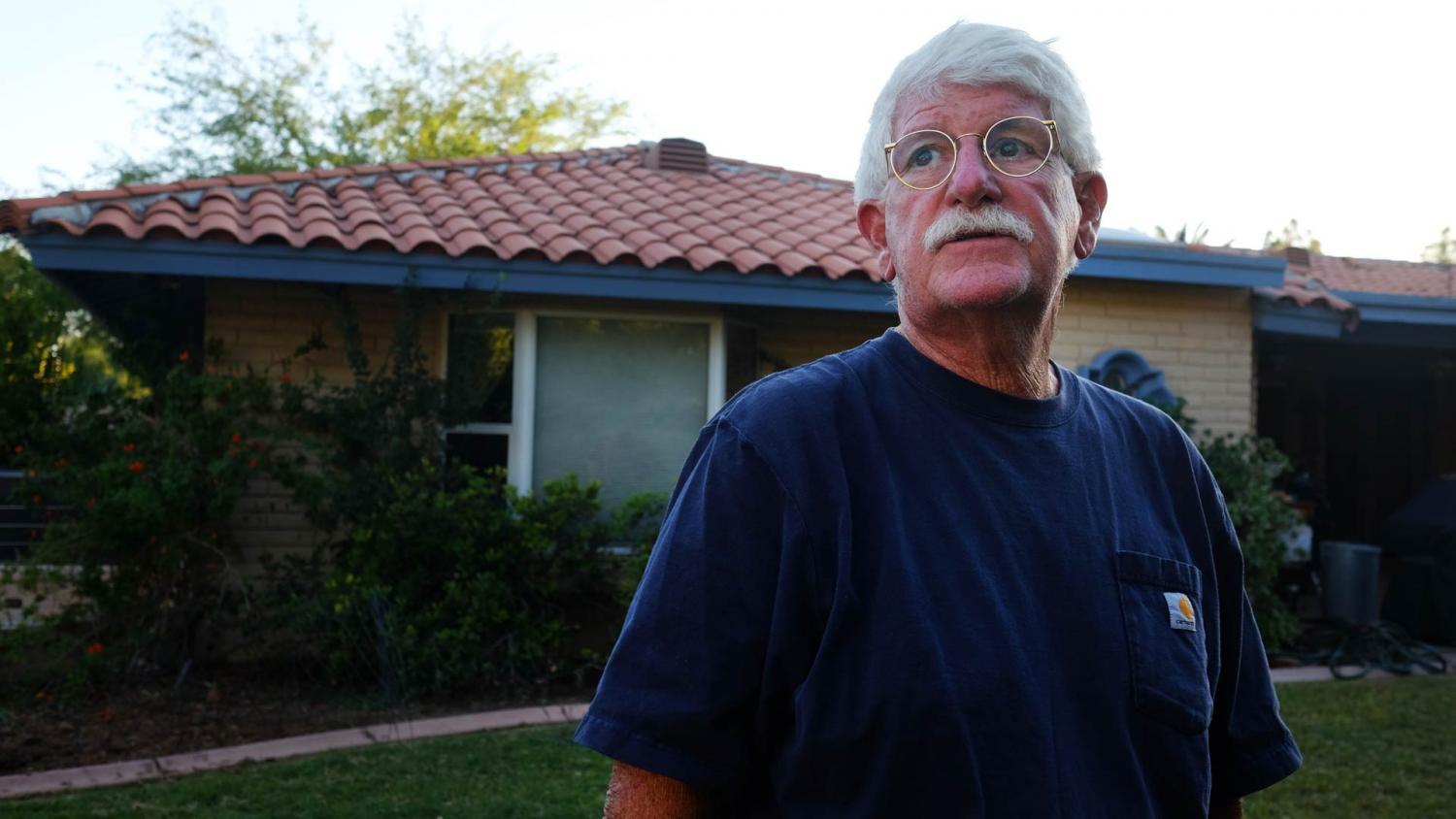 Alisa Reznick/KJZZ
Bill Richardson is a Marine veteran and retired police detective in Phoenix. A and other platoon members initially lived with him and his wife in Tempe after they arrived in the U.S.

Richardson’s daughter worked alongside A and other platoon members as a member of the U.S. military. That’s how he became part of a months-long, patchwork effort to get them out.

He and other advocates helped get 39 women out last year. Now, they’re spread out across the U.S., including some in the Phoenix area.

They’re safe, but also stuck. Like thousands of other Afghan evacuees, the women are here on a temporary immigration status called humanitarian parole, which provides protection from deportation and a work permit for two years, but no path to U.S. citizenship.

A wants to go into the U.S. military now. Another platoon member who lives next door to her in Tempe wants to go back to school to become a nurse.

Those aspirations are made hard or impossible without permanent status. Richardson says he’s watched A apply for almost a dozen different jobs, from bagging groceries to working in fast food. She hasn’t been hired yet.

“You know, this is the land of opportunity, and they get the door slammed in their faces,” he said. 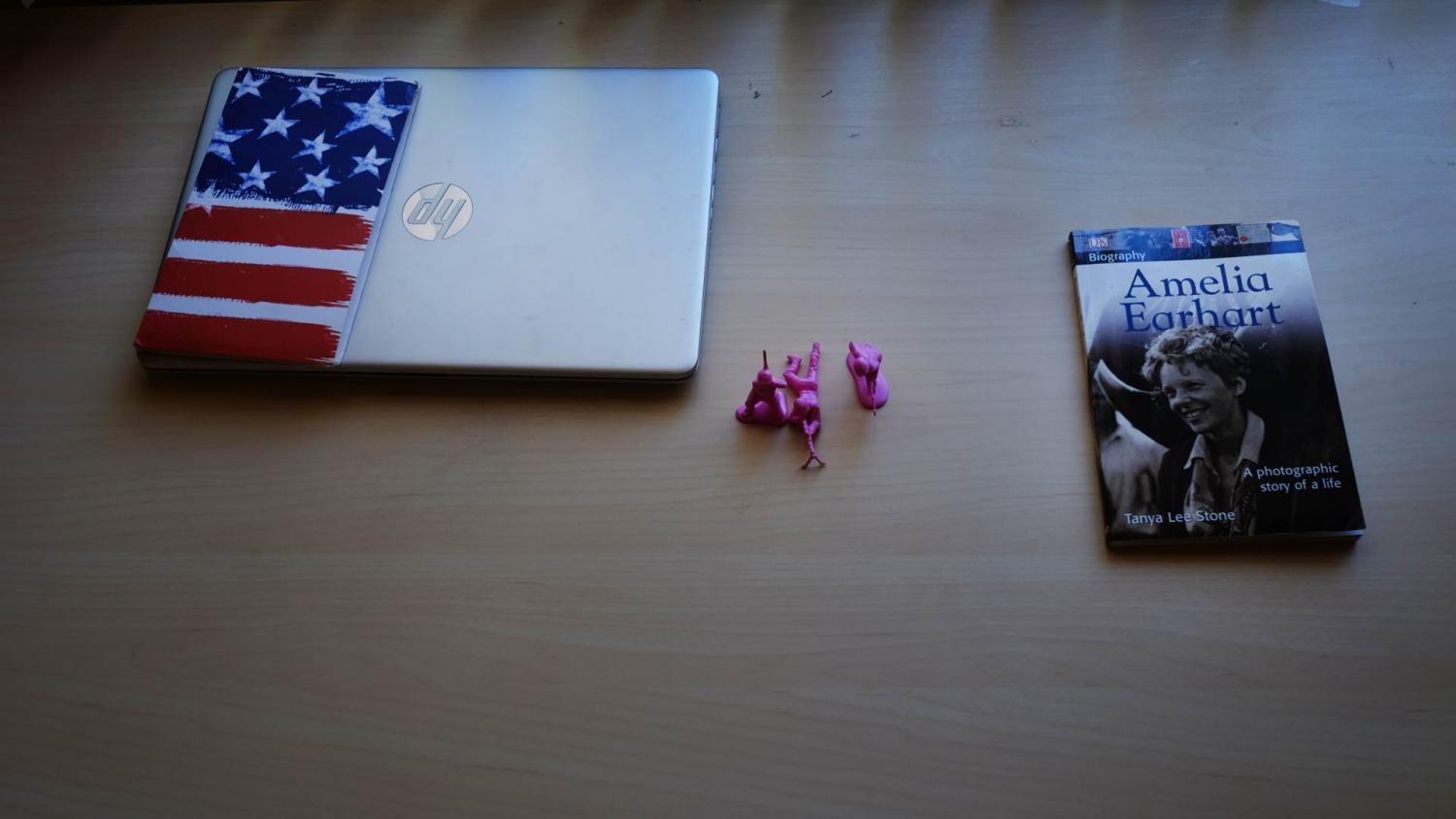 Alisa Reznick/KJZZ
A laptop, book and pink soldier figurines sit atop a desk inside the Tempe apartment where some former platoon members live. Richardson's family gave A an Amelia Earhart book after hearing about her plan to become a pilot herself one day.

Some Afghans evacuees are applying for Special Immigrant Visas, known as SIVs, which are available to those who worked for the U.S. government, as interpreters, security guards and within other roles. A U.S. State Department spokesperson said more than 18,000 SIVs had been issued by September of this year.

But because the women’s platoon was part of the Afghan military, they aren’t eligible. They're applying for asylum, but the process could take years.

A bill that could change that was introduced earlier this year. If passed, the Afghan Adjustment Act would fast-track access to green cards for evacuees with additional vetting, and could also allow people like A to apply for an SIV by expanding the program’s eligibility.

It’s since stalled in Congress.

“You know, the fact that they went from repelling out of helicopters under night vision, conducting these very high profile operations. Now they’re here, labeled as refugees,” she said.

Edmondson long worried this day would come. She helped train the first platoon class more than 10 years ago as part of the Cultural Support Team, a unit within the U.S. military composed mostly of women that served as the U.S. counterpart to the Afghan platoon. She continued working with them during her four tours to Afghanistan.

“Generally we have the same access to things, whereas these women didn't,” she said. “But they took, you know, a very, very unique opportunity, and a very dangerous opportunity and they stepped up to the challenge and thrived in that position,” she said.

Edmondson works with the Pentagon Federal Credit Union now, which is helping to fund English classes and other training for the platoon women. She says she wants to make sure the women have a way to move forward in the U.S.

But she also knows it won’t happen right away. Beyond the legal uncertainty they face, she says many of the women struggle being the only ones in their families to have gotten out of Afghanistan.

“Essentially all the money that they make, in turn gets sent back to their families that are, some of them, starving,” she said. “And so it’s very difficult to expect someone who is going through all this mental, emotional anguish to thrive, immediately, even if they do get connected to a job and all these resources, the majority are really struggling with that fact.”

A paused her English studies at Arizona State University earlier this year. Funding got tight. Plus, she says, news from Afghanistan consumed her focus.

She has a collection of framed photos of her family and work back home that she keeps tucked away in her closet — along with a neatly-folded Afghan flag. She says having them out just brings a rush of painful memories.

“My job was taking care of the people, and work for my country, and help my country, and unfortunately, when I think about it, it makes me very sad and very angry because I cannot do anything for the people in Afghanistan, especially the women,” she said.

Still, she says she’s moving forward. She’ll pick up English classes again next year. And she wants to get her pilot’s license one day, she says it feels like the closest thing to the work she once loved.

It won’t be easy, but she says she knows she can handle challenges. She’s already done it many times before.