From the desert to the sea, CRRIFS cares for and protects San Carlos wildlife 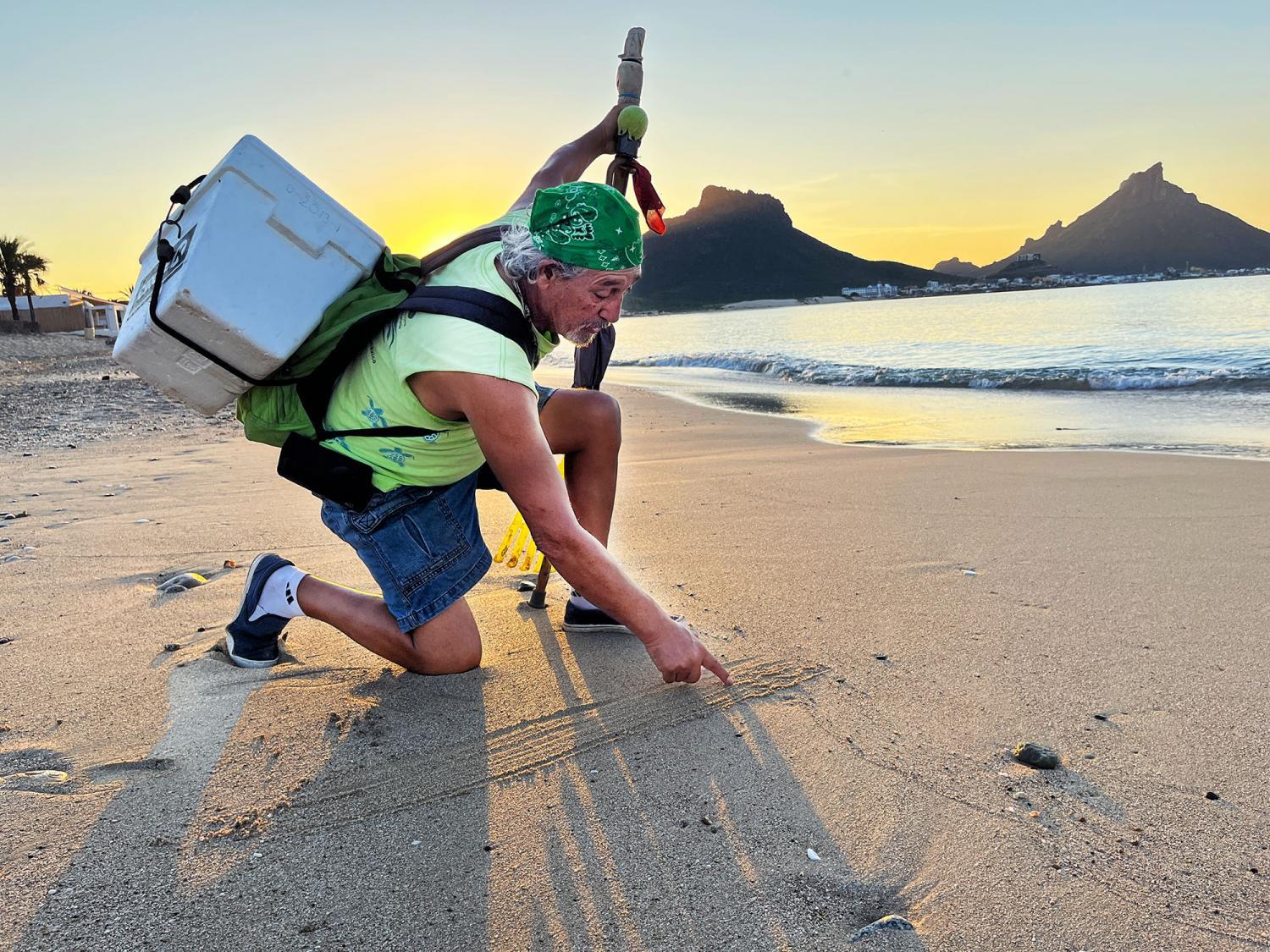 It’s 5:30 on a Sunday morning. And Antonio Lopez is up before the sun, walking along Algodones beach.

“I still get excited when I find a nest or if I see tracks, you know,” says the 65-year-old, as he walks through the damp sand, his walking stick squeaking with every few steps.

The tracks he mentioned are left by Olive Ridley sea turtles making their slow way onto San Carlos beaches during nesting season.

“When you see the tracks it’s hard to miss. It kind of looks like a cooler, somebody dragging a cooler. It’s flat and it has little indentations on each side of the track,” Lopez says.

Those indentations are from the turtle’s flippers pulling her through the sand.

Lopez, who moved to San Carlos four years ago from Colorado, walks two miles along this stretch of beach every morning from June through December in search of those markings.

He gets here early — in time to see the sun glow orange as it rises over the iconic Tetakawi peaks, and to reach any nests before other beachgoers arrive, potentially putting the ping-pong-ball-sized eggs in harm’s way.

“I carry my backpack with everything that I need,” says the long-time volunteer.

Known as a first responder, he has years of experience and training on how to find and register nests and make sure the eggs are protected, and he has his system down.

A metal rod fastened to his walking stick helps him gently test for loose sand where the turtle has laid her eggs. A small plastic rake allows him to cover the turtle's tracks once the eggs are located. And a white Styrofoam cooler strapped to his back can be carefully packed with eggs if the nest needs moving.

Lopez is part of a volunteer group working to help as many eggs as possible hatch. And then, his favorite part:

“Releasing the turtles,” he says with a chuckle. “The first release I saw, watching all the little turtles scuttling out to sea. That hooked me hard.” 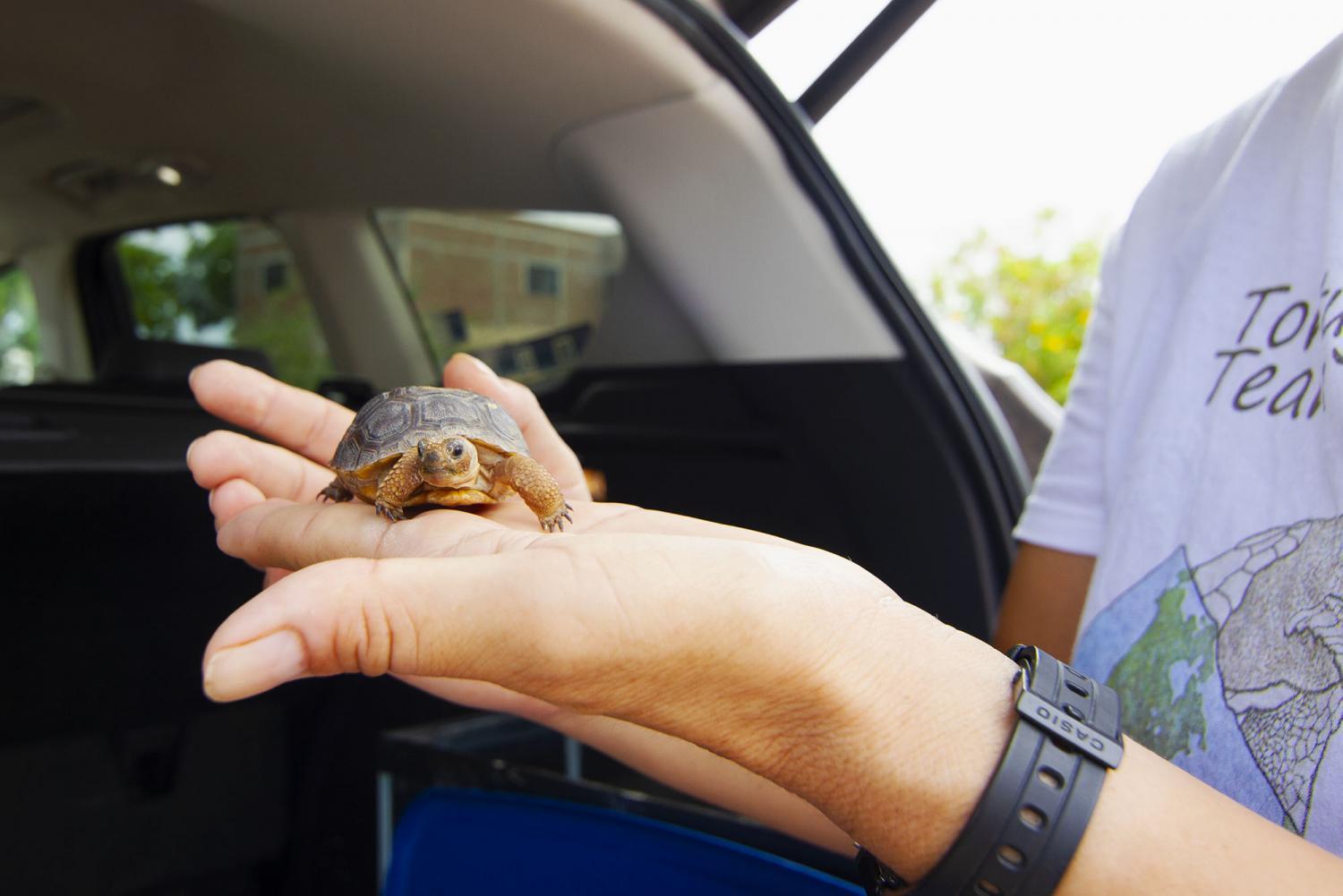 Kendal Blust/KJZZ
Elsa Coria Galindo holds up a tiny desert tortoise CRRIFS is caring for after its shell was painted.

All creatures of desert and sea

In San Carlos, the efforts to protect sea turtles is led by a wildlife rescue known as CRRIFS.

She heads into the CRRIFS headquarters to care for her patients.

“We take care of all kinds of wildlife,” she says. “Both land and marine animals.”

Today in the office there are a pair of baby squirrels; a palm-size desert tortoise; an orphaned opossum joey scratching at its box, demanding milk.

Outside, a pelican with an injured foot shuffles around a shaded pen, and nearby, a sickly sea turtle floats in a shallow pool. 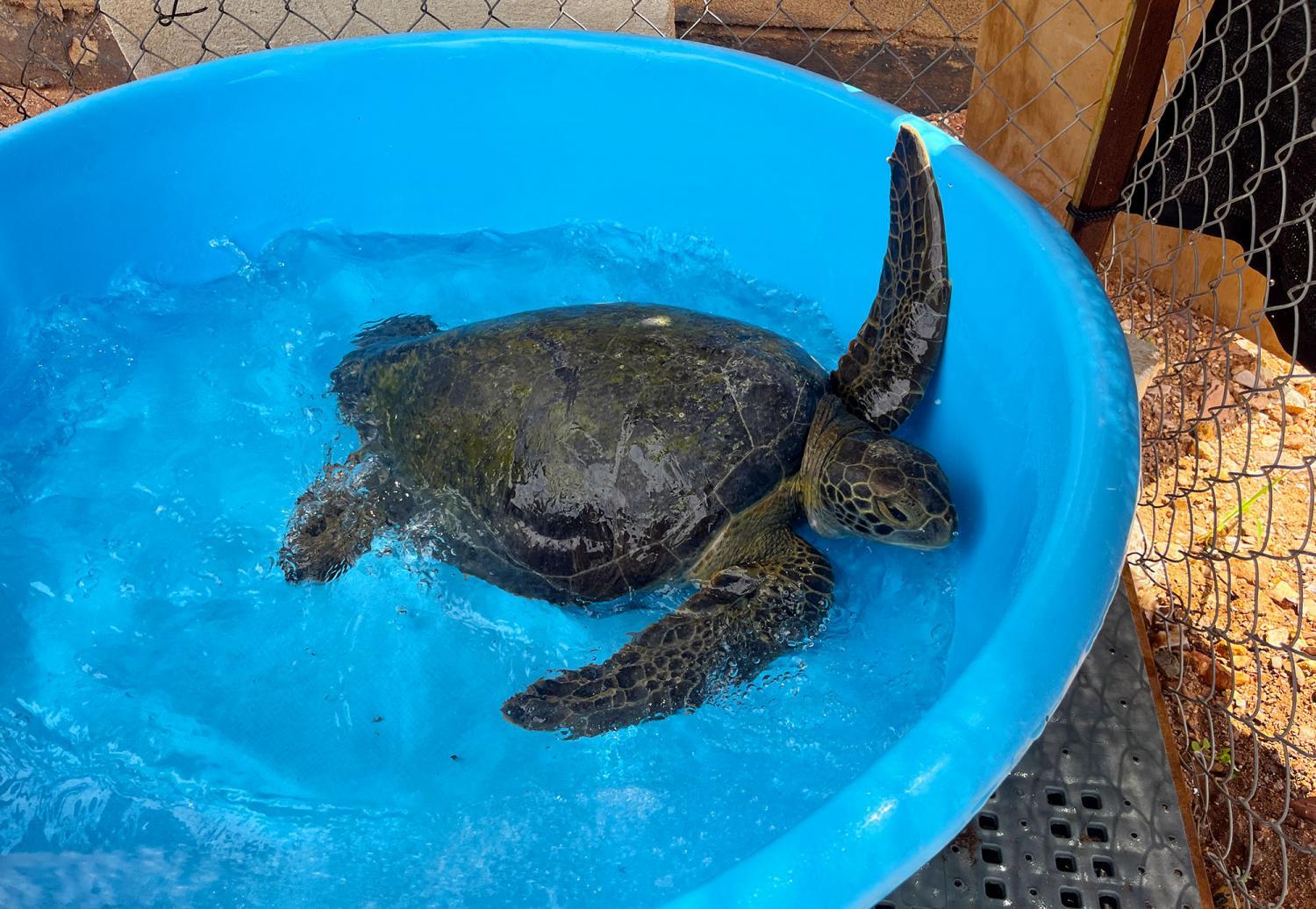 There’s not much they can do for the young green sea turtle but make her comfortable.

But while not every rescue can have a happy ending, Coria says, when her team is able to release animals back into the wild, “It’s priceless.”

And it’s the only compensation Coria, a volunteer, gets.

Five years ago, she and her husband put their family savings into the project, a decades-long dream.

“In reality, this project has been thought about and planned for decades,” she says.

Since she moved to nearby Guaymas more than 20 years ago, Coria and her husband have often cared for injured and sick wildlife, filling what she calls a major gap.

“This is a special place, because we have contact with a great number of animals,” Coria says.

San Carlos, nestled between the desert and the sea of the Gulf of California, is rich with biodiversity. But human activities here can sometimes harm wildlife — which get caught in fishing gear, hit by cars or attacked by pets.

CRRIFS, Coria says, is the only organization in the region that attends to both land and sea animals.

“You could say that our work is really unique in this entire region of the Gulf of California,” she says.

Government agencies often seek the team’s expertise when whales or dolphins are beached; they are the sole resource for large marine mammal autopsies, and they run a program to free sea lions trapped in nets.

Still, Coria wants to do more.

“Our goal is to grow and have a quality facility to care for many more animals, and to train students and professionals to work with wildlife,” she says. “We want to be a big, robust center, with many employees. And we want to inspire others to do this work as well.”

Currently, construction is underway on a new, larger building that will be shared with a domestic animal rescue. It will have surgery and exam rooms, classrooms and lodging for guests and visiting students. In time, new animal enclosures will be installed, and perhaps someday a second location right on the beach.

For now, though, the highlight of their office is the small, temperature controlled incubation room. 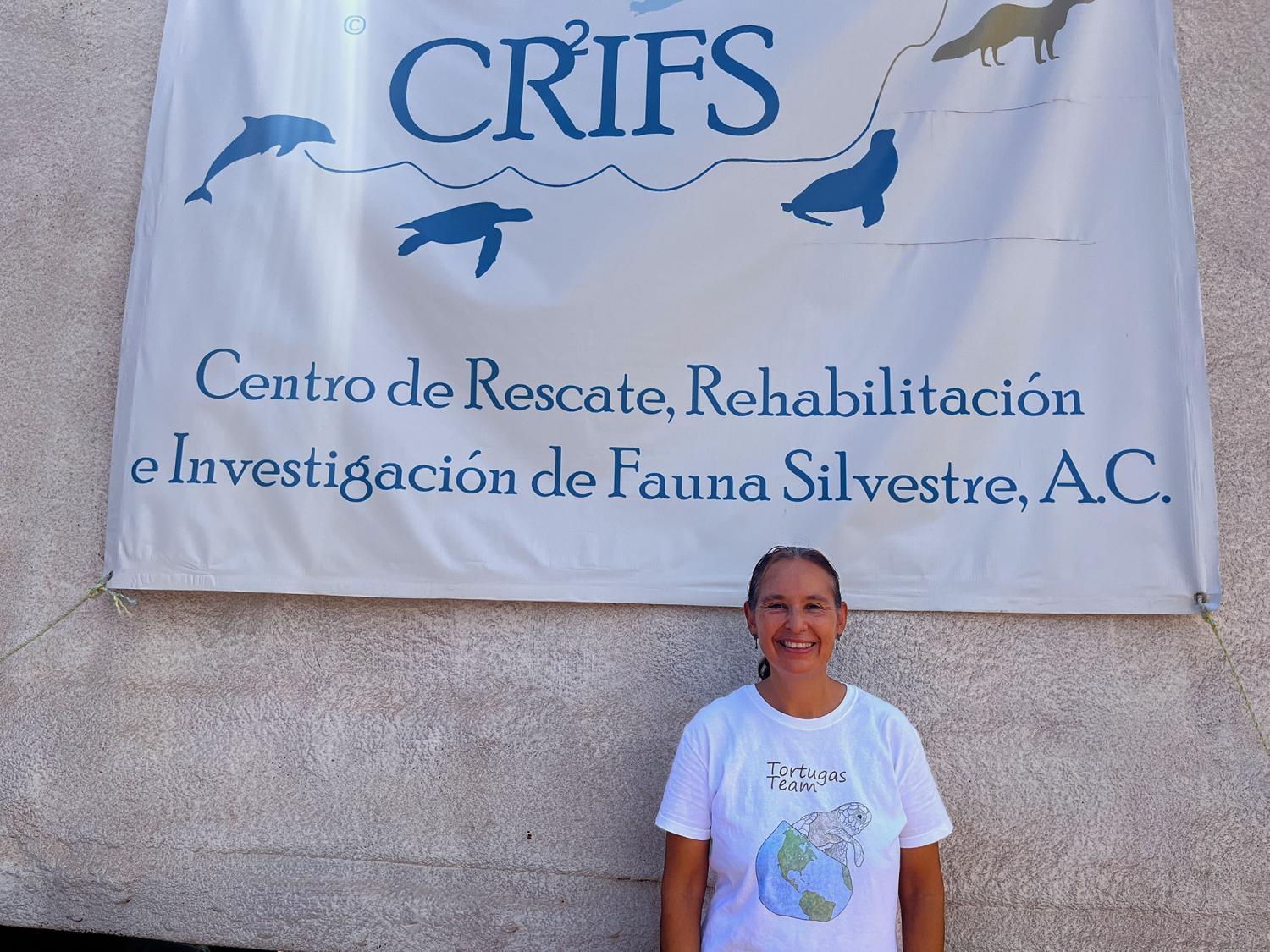 Kendal Blust/KJZZ
Elsa Coria Galindo is the co-founder and director of CRRIFS.

The only one in Sonora, its shelves are lined with Styrofoam coolers. Inside each, a nest with some 100 eggs.

“There have been nests where 100 percent of the eggs have hatched,” says biologist Eduardo Perez, who runs CRRIFS’ sea turtle program.

He says overall between 90-100 percent of eggs hatch in the incubation room — about 20% more than in nests on the beach, which face a lot of risks — like vehicles.

Four Wheelers and trucks sometimes crush the baby turtles, he says. Or they leave ruts in the sand that can present an insurmountable barrier for tiny hatchlings trying to reach the water. In other cases, nests are accidentally cooked by nearby bonfires or dug up by dogs. So

So, Perez and his crew of well-trained volunteers move the ones they can to the incubation room to increase their chances of survival.

“The volunteers are so important, because, as you can see, this is a lot of work,” he says. “And our volunteers, they do all of it out of their love for the animals, for the turtles.” 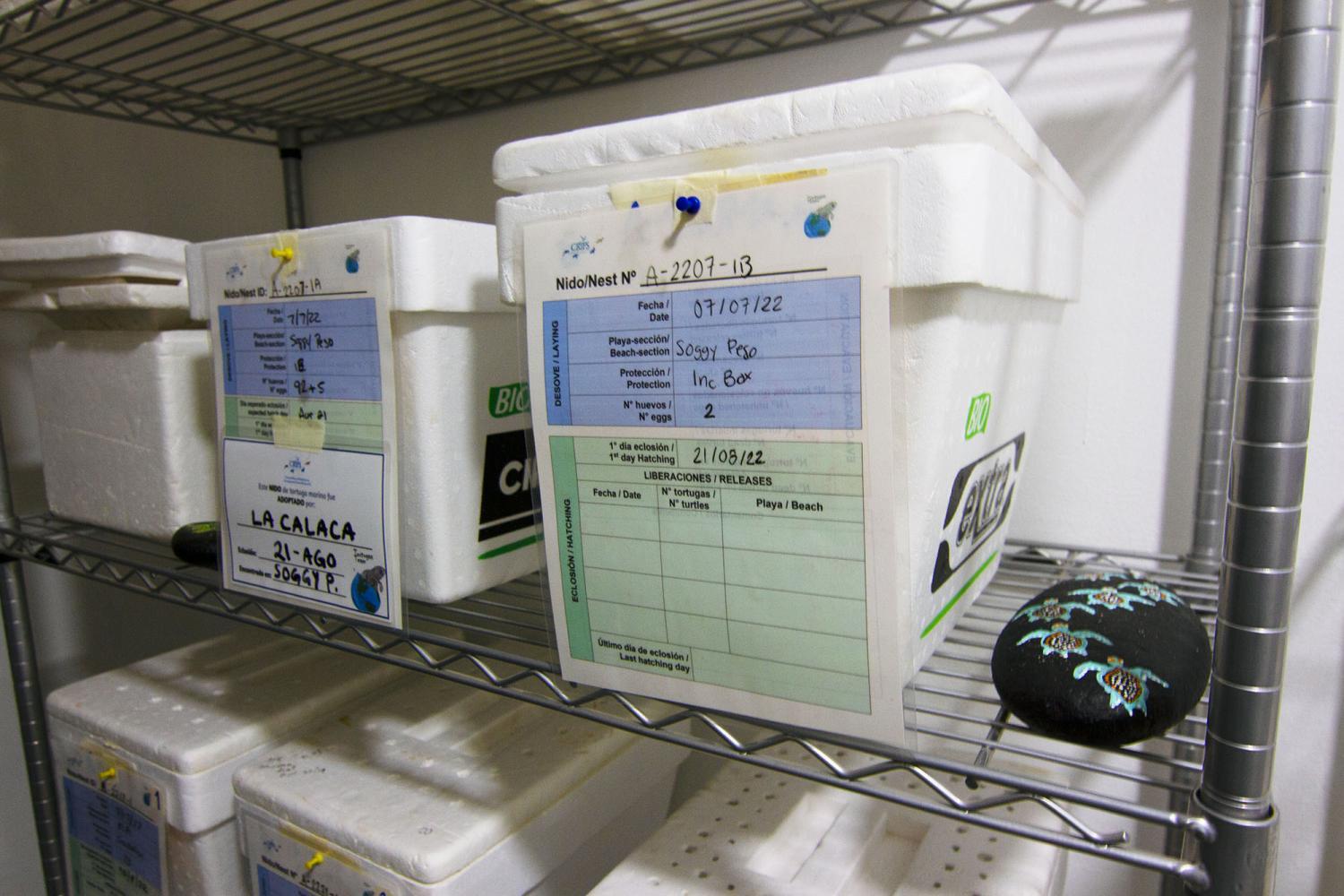 Kendal Blust/KJZZ
Each cooler contains a nest of sea turtle eggs, usually about 100, that were carefully transferred here from San Carlos beaches.

Once hatched, the baby turtles are released with the help of supporters who adopt the nests by providing a donation.

“Fortunately, there are now many people who know our work and want to help,” Coria says. “It wasn’t always that way. When we first started people thought it was crazy to try to save injured birds and turtles. Now, dozens of people join us to watch the turtles crawl out to sea.”

Coria says the releases help bring attention to the rescue’s work. Each year, more nests are adopted, volunteers signed up and needy wildlife reported to the CRRIFS crew. Last year, the team attended to about 63 animals, in addition to their sea turtles and sea lion projects. This year, she says, they are on track to more than double that number.

For Coria, that’s proof that when you do something from the heart, it’s bound to succeed.

“Even when it’s hard, and it has been hard,” she says. “You know you’ll do whatever it takes.” 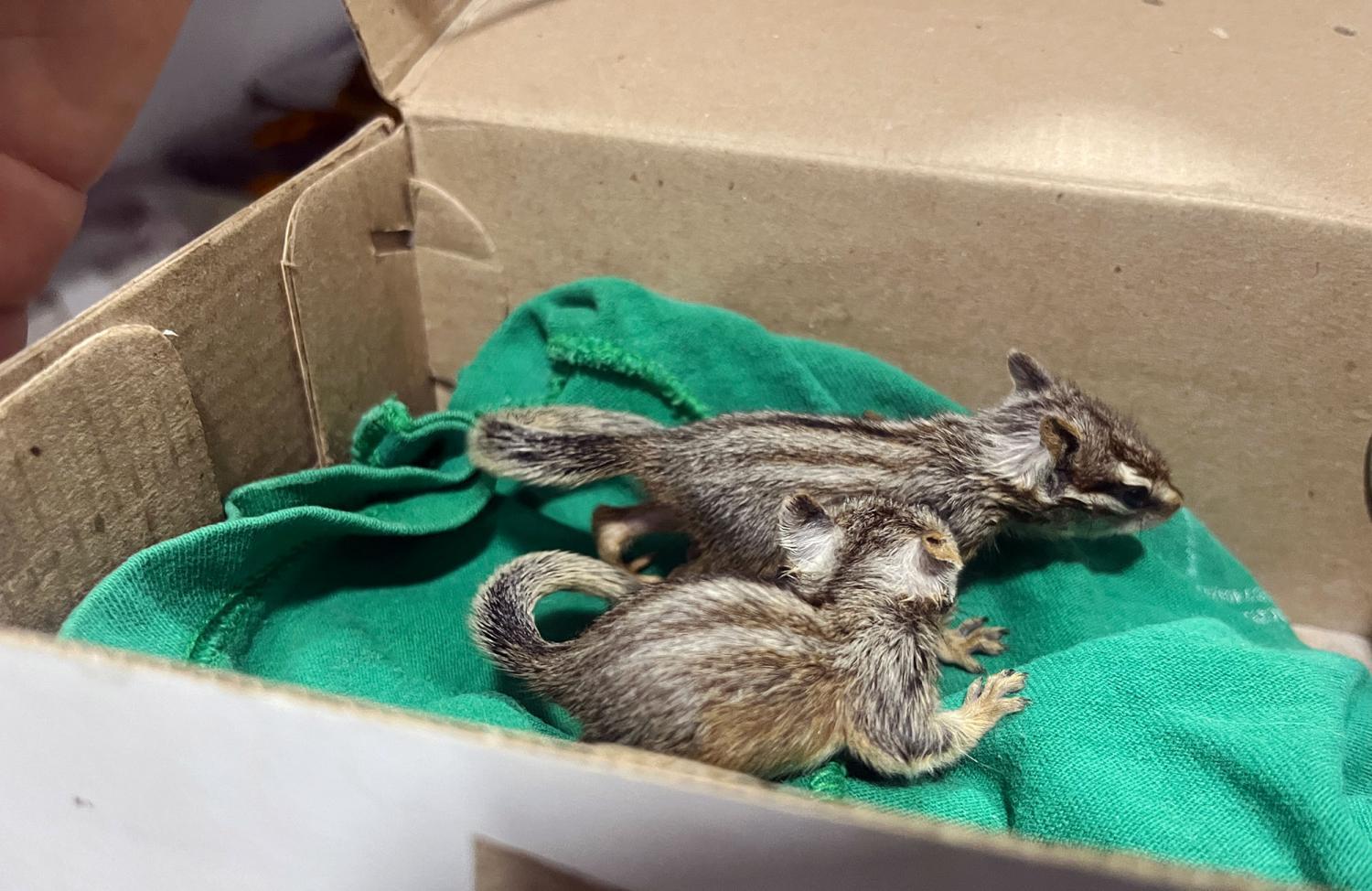 Kendal Blust/KJZZ
Two baby squirrels huddle together in a small box they were in when transported to CRRIFS for care. 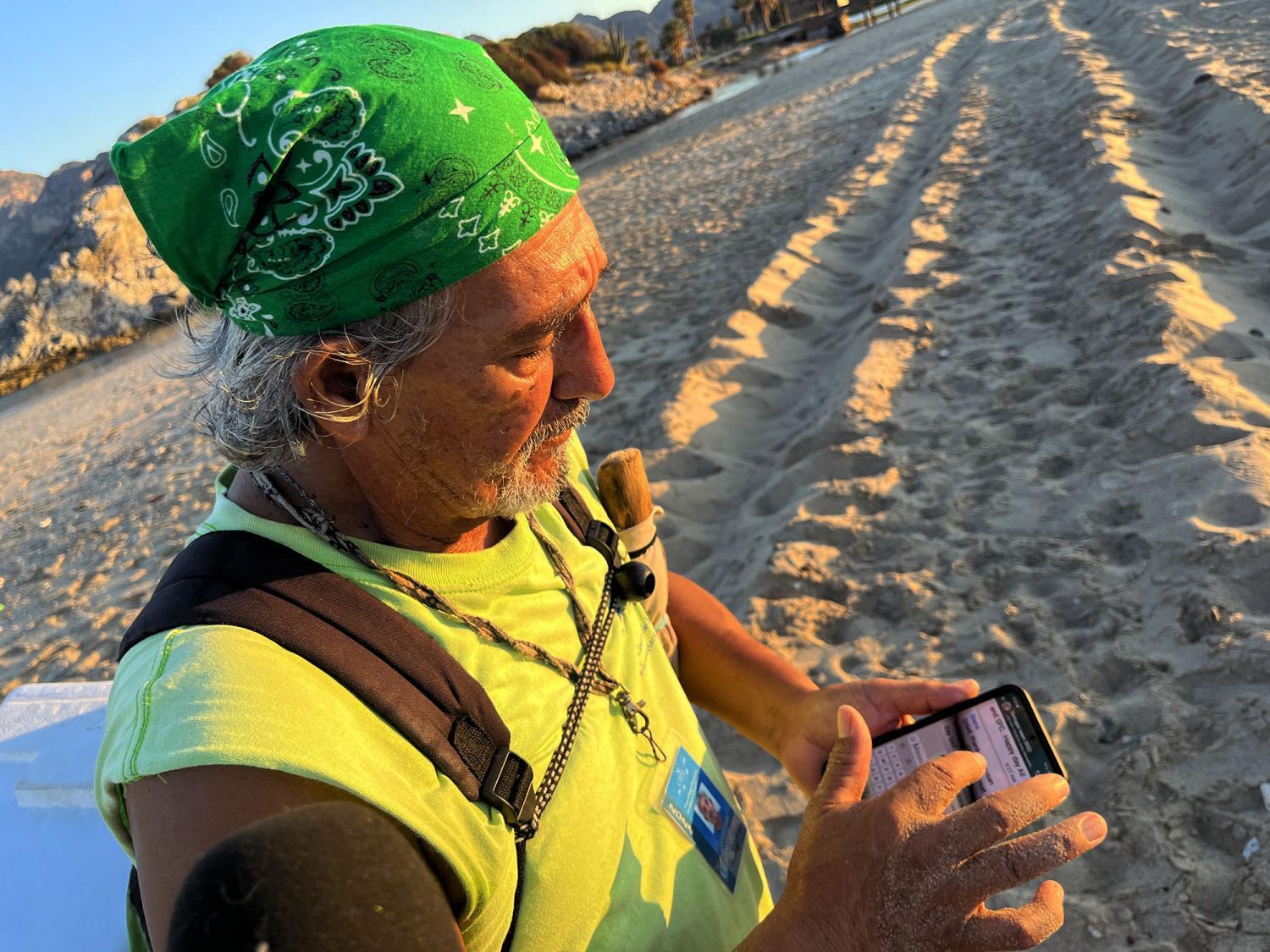 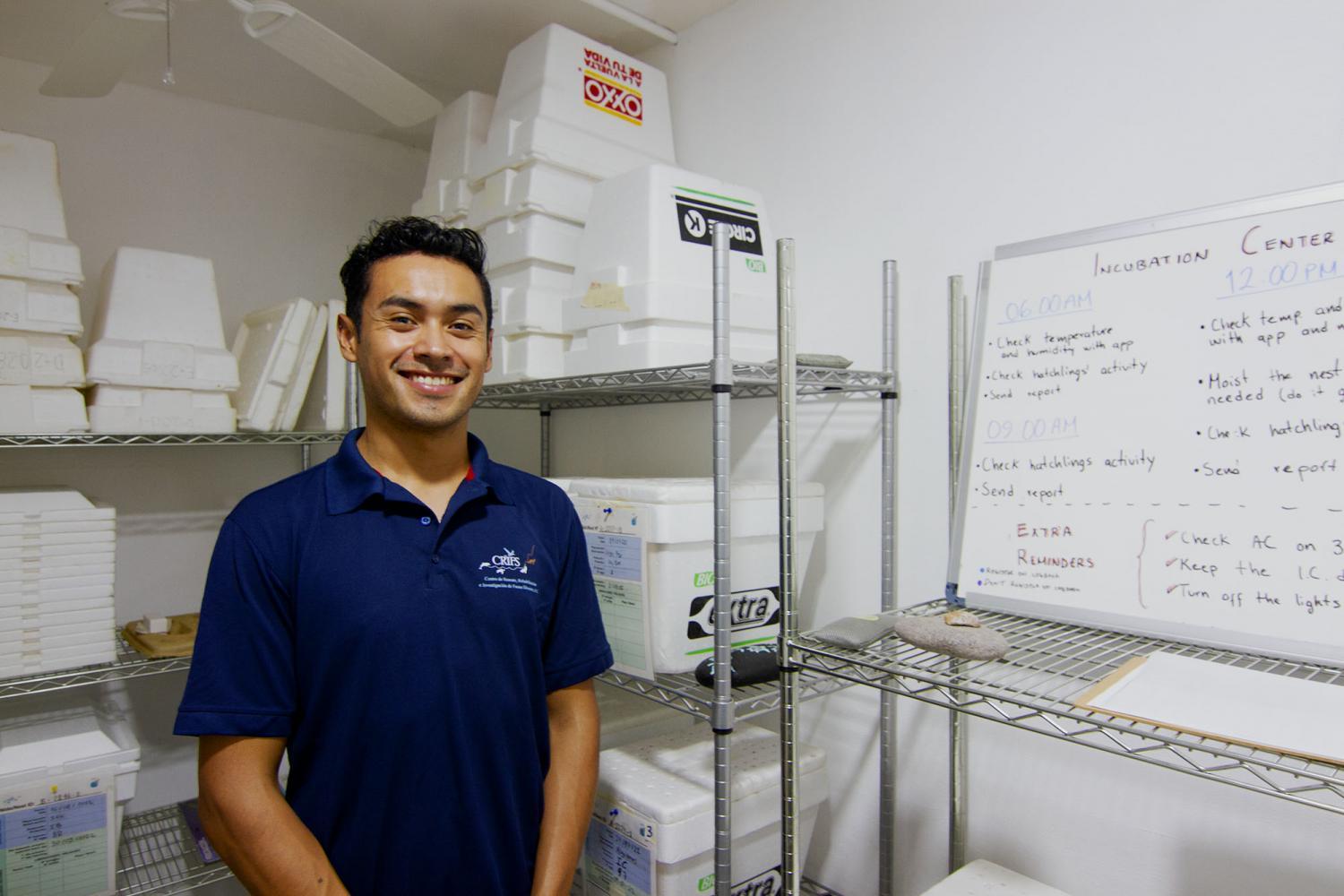 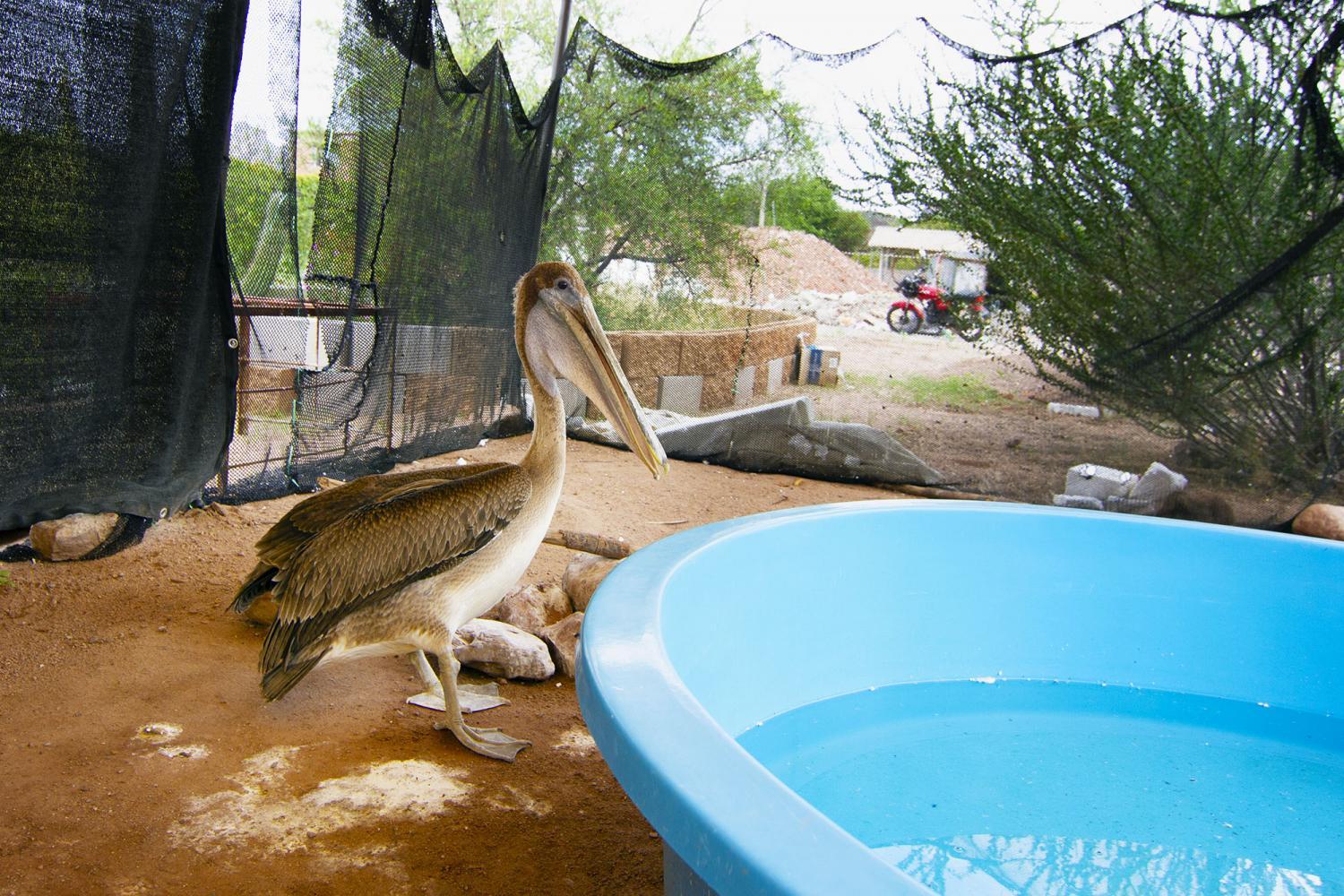 Kendal Blust/KJZZ
A pelican with an injured foot stands in a pen at the CRRIFS headquarters in San Carlos, Sonora. 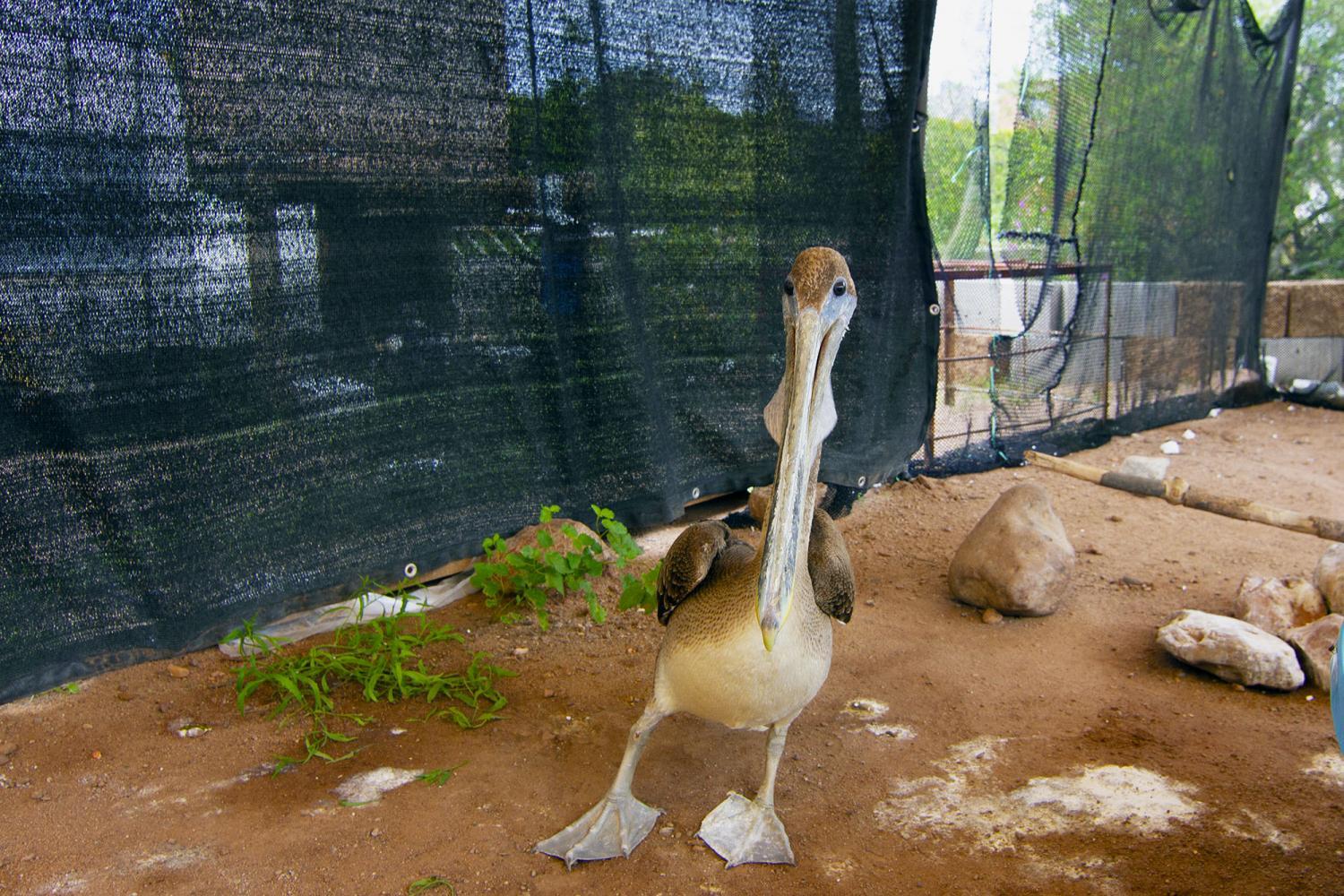 Kendal Blust/KJZZ
A pelican with an injured foot receives care from the CRRIFS team. 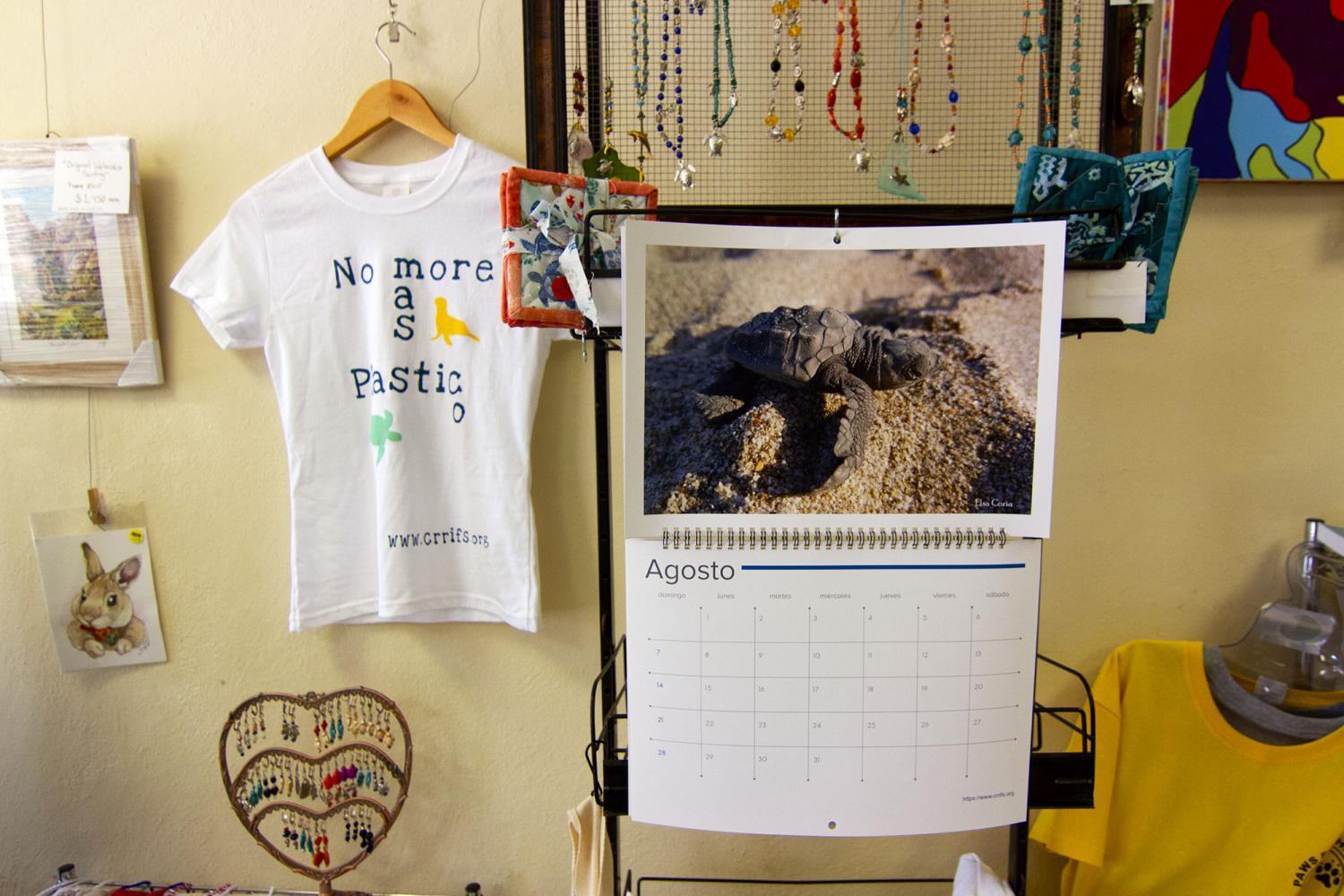 Kendal Blust/KJZZ
CRRIFS sells calendars, t-shirts, buttons and key chains at a store on the marina to help fund the rescue's operations. 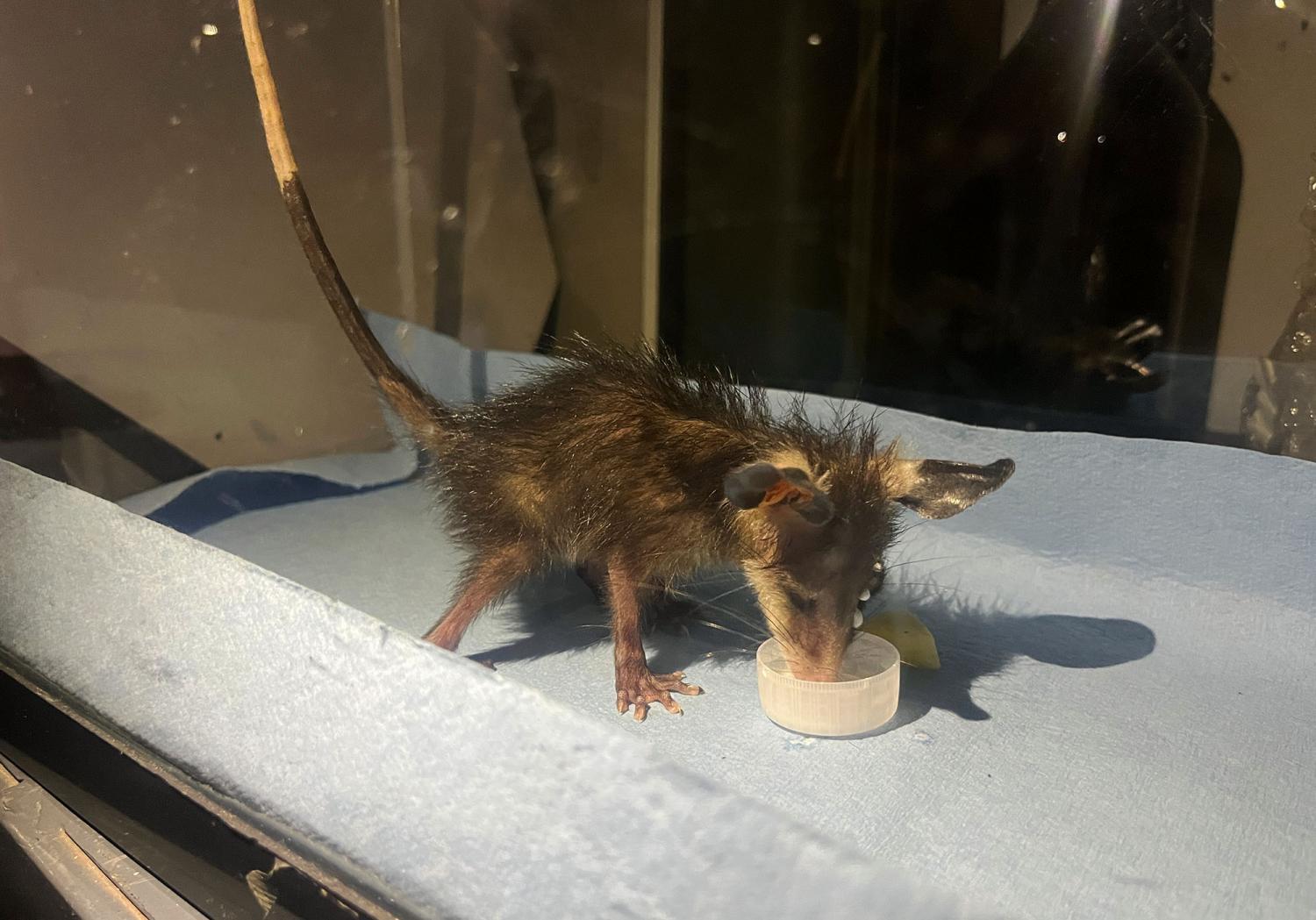 Kendal Blust/KJZZ
An orphaned opossum joey sips milk from a bottle cap at the CRRIFS headquarters in San Carlos, Sonora. 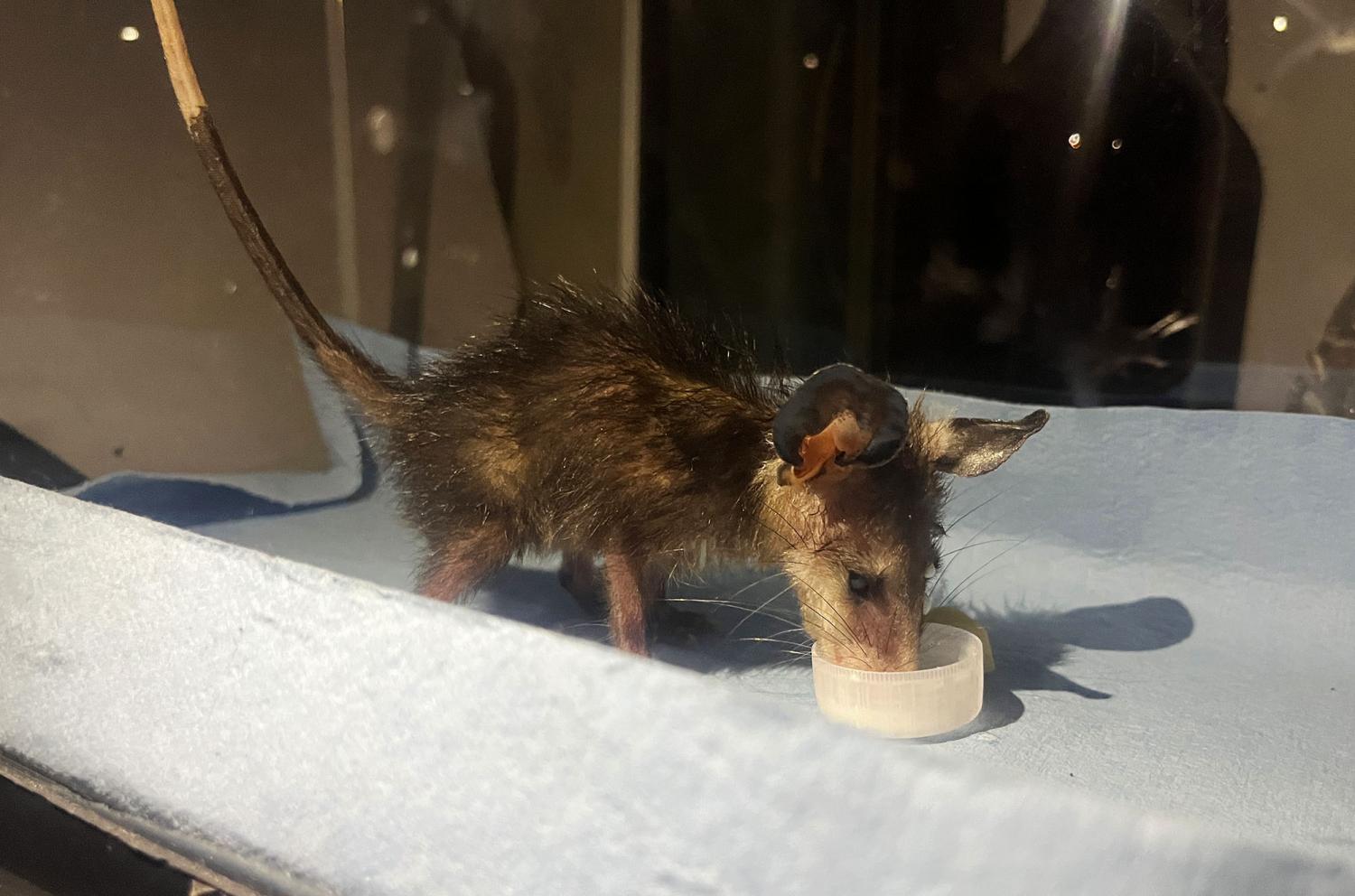 Kendal Blust/KJZZ
An eager baby opossum, called a joey, gets milk on it's face as it sips from a bottlecap in the CRRIFS headquarters. 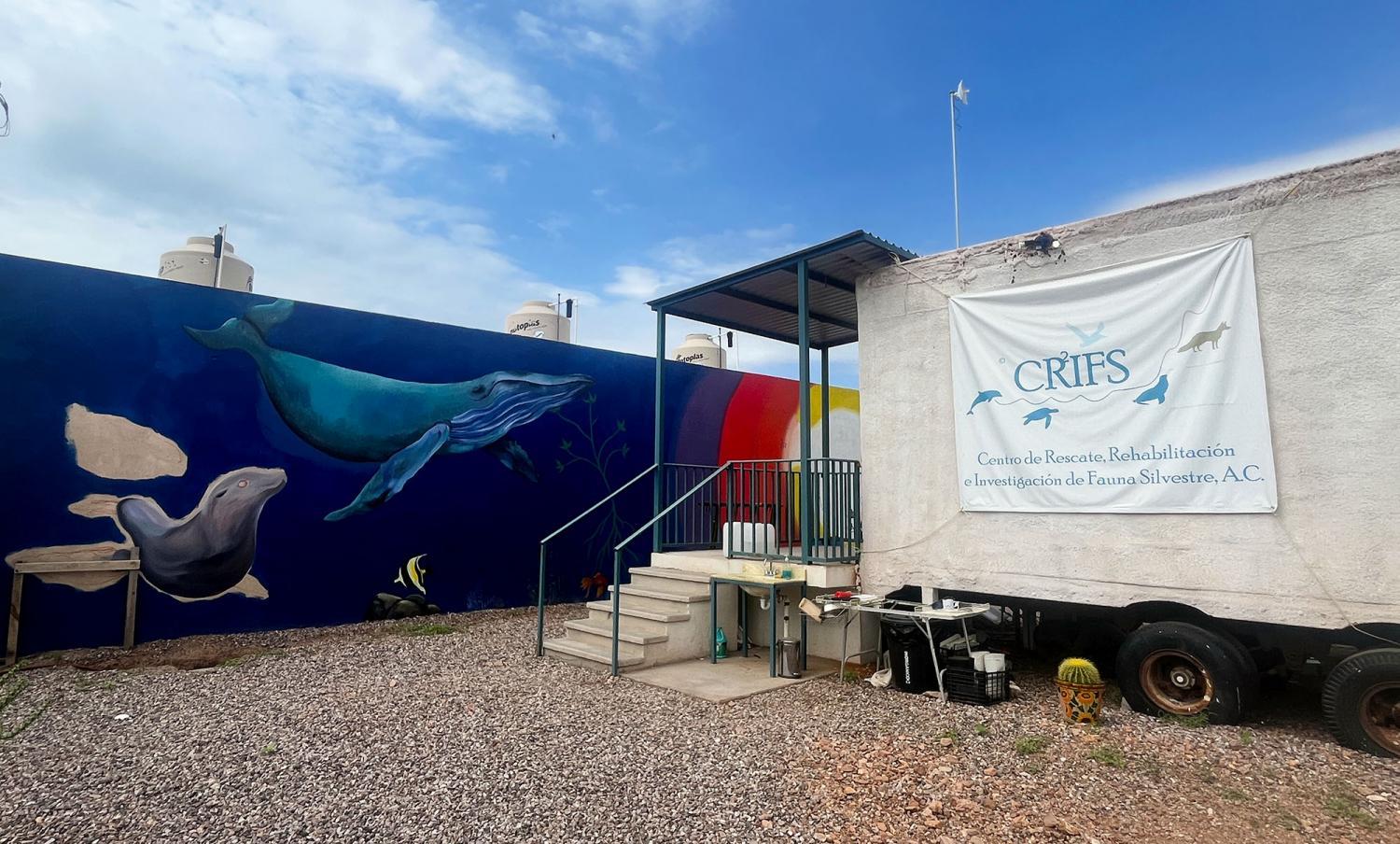 Kendal Blust/KJZZ
A mural outside the trailer that currently serves as the CRRIFS headquarters. 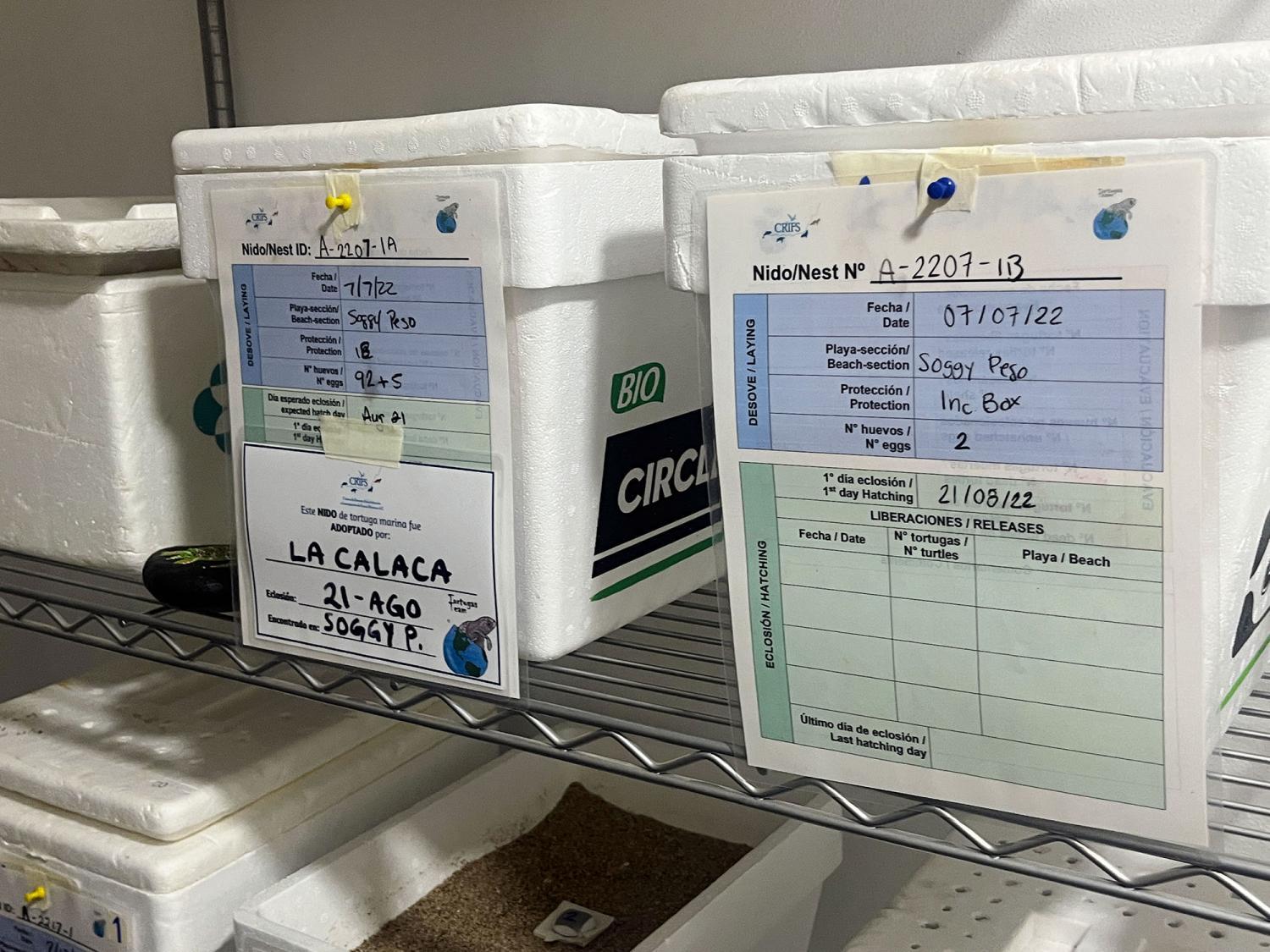