Why Phoenix must replace thousands of water service lines 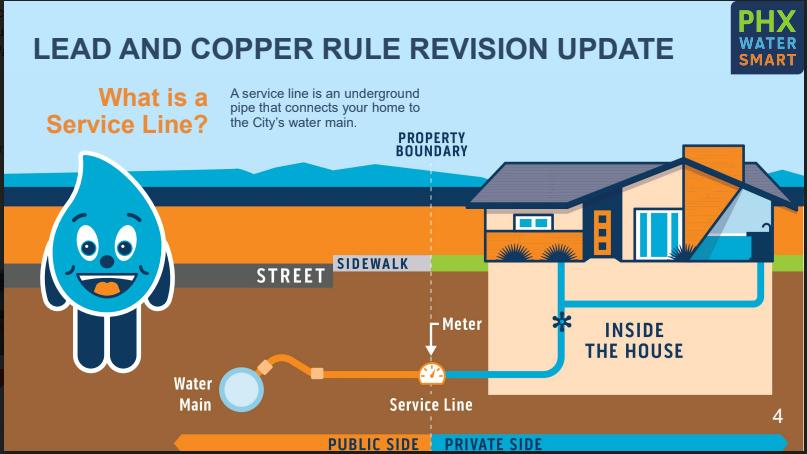 A new federal requirement means Phoenix will replace thousands of water service lines to reduce the risk of lead exposure in drinking water.

The EPA says community water systems, like the city’s, must inventory service lines and publicize information about the materials used. Service lines are small pipes that connect homes to the city’s main line.

Troy Hayes, Phoenix’s water services director, told city leaders the inventory is underway. “Of the 70% of the inventory that we do have, we have not found a lead service line in our system and we don’t anticipate to find one. If there is a lead system out there, it will be immediately replaced,” he said.

Phoenix expects the inventory of materials to be completed by December 2023 with results provided to the Arizona Department of Environmental Quality (ADEQ) which oversees the EPA’s Lead and Copper Rule.

Phoenix has identified about 6,000 service lines made of galvanized steel which the EPA wants replaced.

“Because if you ever had lead in the system, there’s a potential that lead particles have adhered itself to the galvanized pipe and then that’s why they want that addressed,” Hayes said. “With the sampling that we’ve done with our system throughout the years, since 1990, lead has not been an issue.”

Phoenix estimates the price tag at $40 million and will request federal funds to cover half the cost.

The changes are part of the first major update to the Lead and Copper Rule in nearly 30 years. It also requires testing for lead in drinking water in all elementary schools and childcare facilities over a five-year period (20% of schools and facilities tested each year). Lead is a toxic metal that cause serious health issues when ingested.

In 2017, Phoenix said all identified lead issues in public school districts were addressed as part of a statewide school screening program administered by ADEQ. The city is creating a list of school and childcare centers, developing sampling instructions and procedures to track and report the new tests to ADEQ.

According to the EPA:

Lead can enter drinking water when plumbing materials that contain lead corrode, especially where the water has high acidity or low mineral content that corrodes pipes and fixtures. The most common sources of lead in drinking water are lead pipes, faucets, and fixtures. In homes with lead pipes that connect the home to the water main, also known as lead services lines, these pipes are typically the most significant source of lead in the water.  Lead pipes are more likely to be found in older cities and homes built before 1986.  Among homes without lead service lines, the most common problem is with brass or chrome-plated brass faucets and plumbing with lead solder.