Some Arizona abortions resume, but some still want to see state enforce a ban 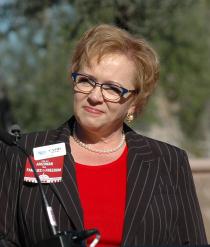 Some abortions in Arizona resumed this week after an appeals court temporarily blocked enforcement of the state’s near-total abortion ban. But some still hope to see the state outlaw abortion.

“The only reason the Arizona pre-Roe law was not enforceable was because of Roe. Roe is gone. Now that pre-Roe law should be enforceable," Herrod said. "It’s a matter of time before the courts do the right thing."

But Arizona also has newer laws related to abortion, like one passed this year that allows the procedure up to 15 weeks gestation. Planned Parenthood is arguing courts need to explain how that law should fit in.

When they temporarily blocked enforcement of the old ban, appeals court judges wrote that Planned Parenthood has a "substantial likelihood of success" in their argument.

Polling suggests most Arizonans want abortion to remain legal, at least in some circumstances. Less than 10% of Arizonans in a September poll said they thought all abortions should be outlawed in the state.