As election season kicks off, take a look back at how races were covered in the 1900s

This week, The Show is kicking off our election coverage with a conversation about the 2020 election and how it might impact this year’s midterms.

But first, we thought we’d look back at some much earlier Arizona elections as chronicled in the state’s historic newspapers.

Sativa Peterson is a senior producer for The Show and a former newspaper librarian. The Show spoke with her to learn about Arizona's past elections.

What did you find?

I looked at some election news and headlines from the first decade of Arizona statehood (1911-1922) and a few things stood out. One of these was the turnaround time for receiving election results.

I’ll give you a couple of examples. 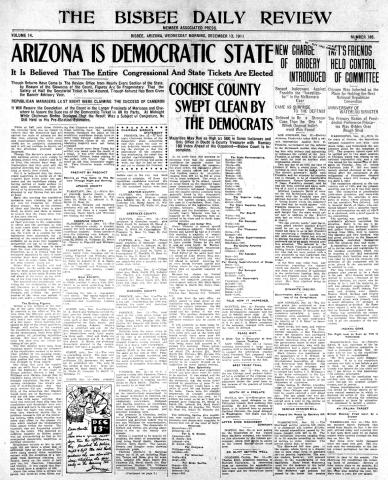 Arizona State Library, Archives and Public Records
A story in the Dec. 13, 1911 edition of the Bisbee Daily Review says that despite receiving most ballots from the Dec. 12 election, by "slowness of the count," results could not yet be determined.

The Bisbee Daily Review of Dec. 13, 1911, says, "Though returns have come to the review office from nearly every section of the state, by reason of the slowness of the count, figures are so fragmentary that the safety of half the senatorial ticket is not assured." The election was held on Dec. 12, 1911 — the day before. Arizona's first election to the United States House of Representatives was also held that day; Carl Hayden was elected. 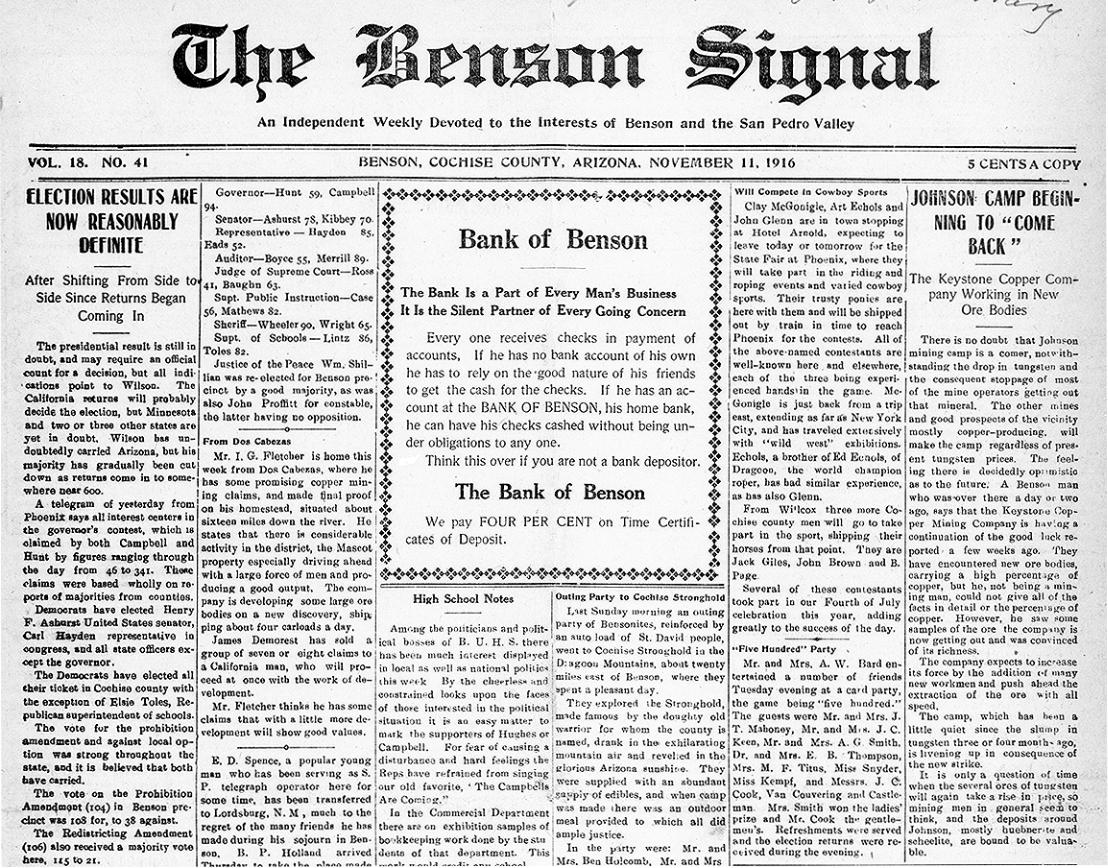 The Benson Signal of Nov. 11, 1916. The headline says, "Election Results Are Now Reasonably Definite." The election that year had taken place on Nov. 7 (so four days earlier). It says, "After shifting from side to side since returns began coming in…" A prohibition amendment was on the ballot.

And of course, there’s talk about the weather.

The Williams News, Nov. 9, 1916 [read], "Most Momentous Election for 50 years" [and] "The day dawned with a cold raw breeze blowing and the promise, later fulfilled, was for a cold day."

Did anything else stand out to you?

I would have to say examples of civility and nonpartisanship. It was definitely a kinder, gentler time. 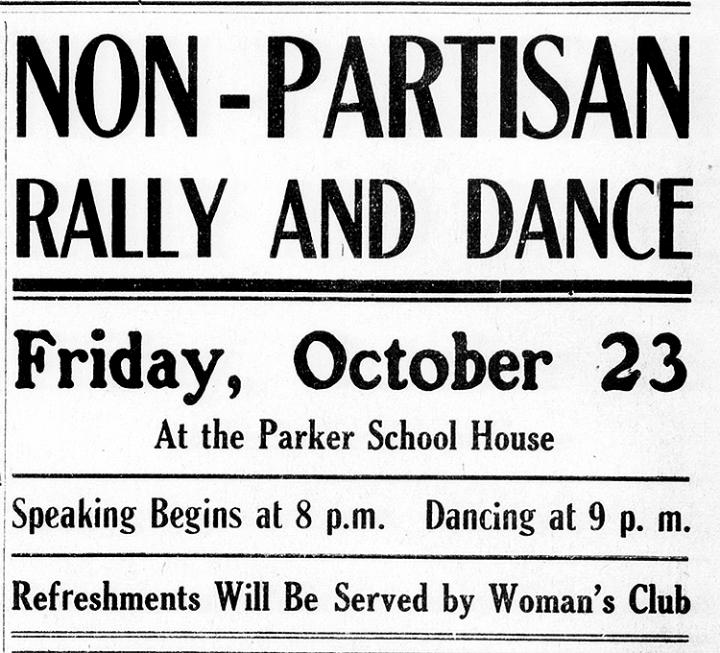 Arizona State Library, Archives and Public Records
An ad in the Oct. 23, 1914 edition of the Parker Post advertising a nonpartisan dance.

In particular, one thing I loved was printed in the Parker Post on Oct. 23, 1914, about 10 days before election day. It is an ad for a "Non-Partisan Rally and Dance. At the Parker School house. Speaking begins at 8 p.m. Dancing begins at 9 p.m. Refreshments will be served by [the] Woman’s [sic] Club." 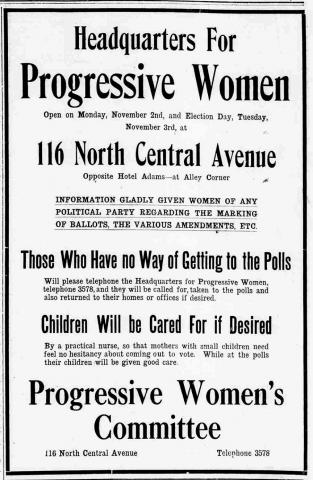 Arizona State Library, Archives and Public Records
A front page article in the Nov. 2, 1914 edition of the Arizona Republican detailing a “Downtown Headquarters for Progressive Women."

It’s hard to imagine a nonpartisan dance being held this election season.

Did you notice any difference in how people were voting then versus now?

I was struck by how often the idea of voting the straight ticket came up. This was something you saw with both the Democrats and the Republicans. 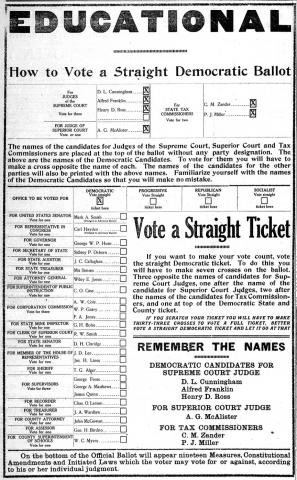 Arizona State Library, Archives and Public Records
A story in the Oct. 30, 1914 edition of the Graham Guardian encouraging voting for a straight ticket.

For example, in the Graham Guardian on Oct. 30, 1914, we see a full page ad with the word "educational" in all caps. "How to Vote a Straight Democratic Ballot."

We don’t necessarily see ads like this anymore. It may be implied that we should vote for all one party or another, but this was much more straightforward in that messaging.

For their part, Republicans had a full-page ad in the Dec. 12, 1911, edition of the Arizona Republican encouraging a straight ticket that said, "A Vote for the Republican Ticket is a vote for Prosperity for Arizona." 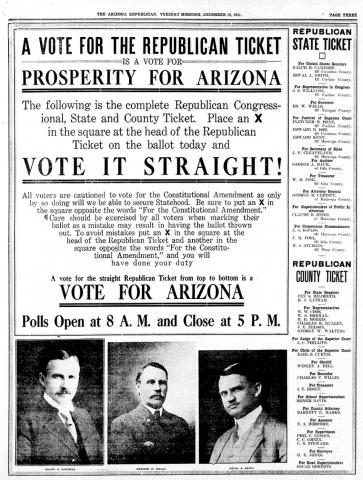 Arizona State Library, Archives and Public Records
A full-page ad in the Dec. 12, 1911 edition of the Arizona Republican encouraging voting for a Republican ticket.