An appeals court could end DACA. Many students never had the protection it provided anyway 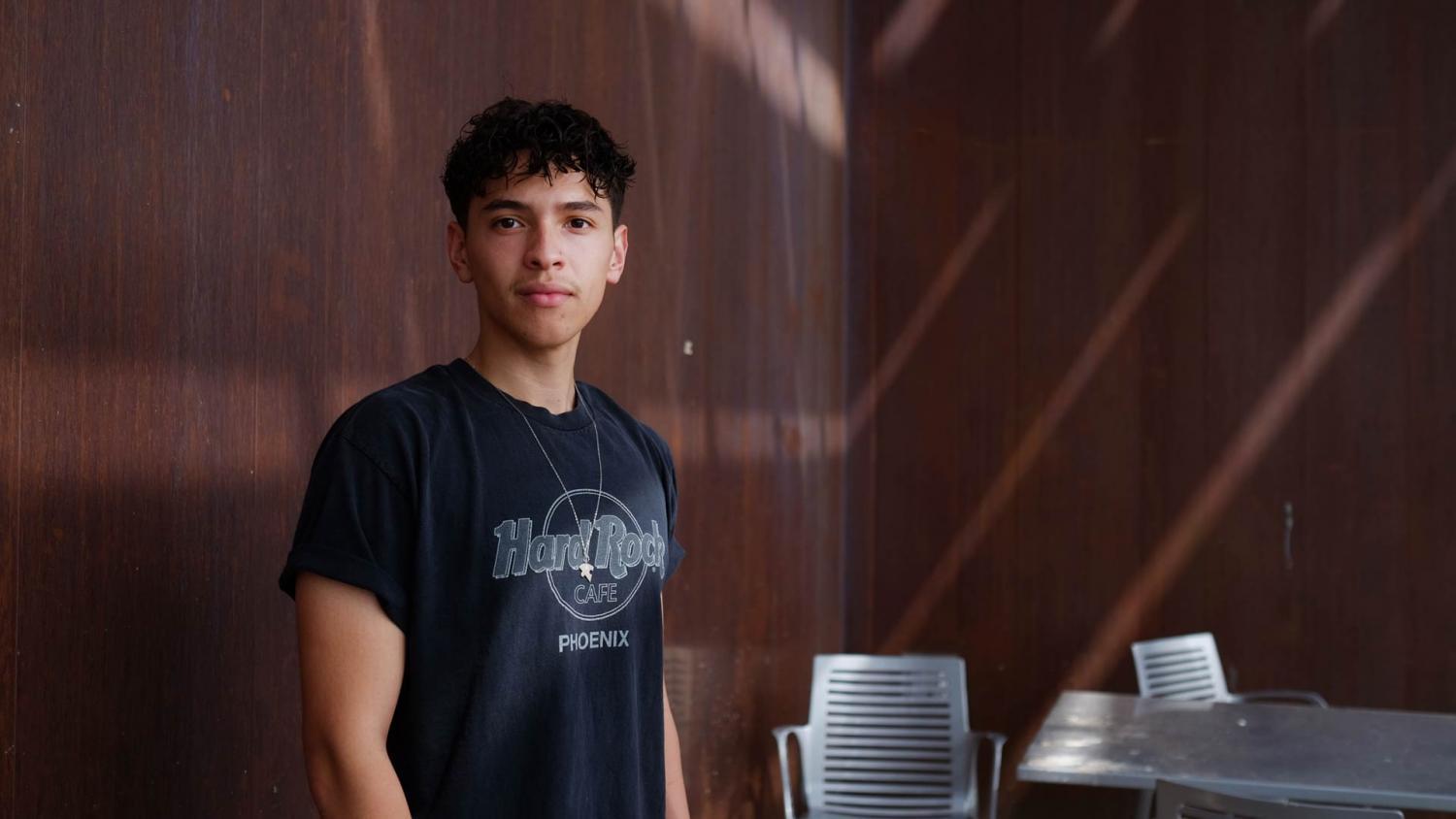 Alisa Reznick/KJZZ
Angel Palazuelos came to Phoenix when he was 4 years old with his mom and brother. The family settled in Arizona days after the deadline to apply for DACA.

Angel Palazuelos was a little kid when his mom sat him and brother down to have the talk.

“And this is not like the coming of age talk, it’s the like immigration, you’re undocumented talk,” he said.

This talk, he’d later find out, was one that a lot of families had — what to do if one day, Mom or Dad had been arrested and put into deportation proceedings.

“[She’d say] like if one day, I’m picking you up from school and I’m an hour late, just know that you have to call this number, and you’ll be OK. Don’t worry, don’t panic, we’ll figure it out. You’ll continue to get an education, your future is what matters,” he said.

Palazuelos has a blue nose stud and dark curls that bounce on his forehead as he talks. He came to Arizona with his mom and brother from Culiacán, in northern Mexico, when he was 4 years old. She was fleeing an abusive relationship with his father, and both of her parents were U.S. citizens — in Arizona. They began traveling to the state on a visa and eventually stayed. He’s studying at Arizona State University now.

He always knew he was undocumented. He also knew he wanted to go to college. So, on his first day of high school in Phoenix, he asked a counselor how to do both.

“And I remember her just looking at me in awe, like, ‘I want to help you, I’m just not sure how to help you,’” he said.

A federal appeals court is expected to rule on the future of DACA soon. That’s the Obama-era program that has gave some undocumented people brought to the U.S. as children protection from deportation and a work permit. The program has been a lifeline for school and the workforce for some 800,000 young people. But others, like Palazuelos, never even had the option.

He wasn’t even in high school yet when the program was introduced in 2012. Among other eligibility requirements, the Obama administration said people needed to have been in the country continuously on or before June 15, 2007.

“Thinking about it, I often resent, like, that magic number, the three days, like why the number three? Like how my life could have been so much more different if I just came three days earlier,” he said.

But he’s not alone. Palazuelos graduated from high school at the peak of the pandemic in May 2020. He was one of one about 2,000 undocumented high school graduates that year in Arizona alone.

This year, a report from the advocacy group FWD.us found an estimated 100,000 high school graduates around the country were undocumented. About three quarters of them don’t qualify for DACA. That number’s getting bigger.

“So we estimate there are 600,000 K-12 undocumented. The overwhelming majority of those people were not in the country before 2007, so they would not be eligible for DACA,” said Mark Delich, director of federal policy and government relations at FWD.us. 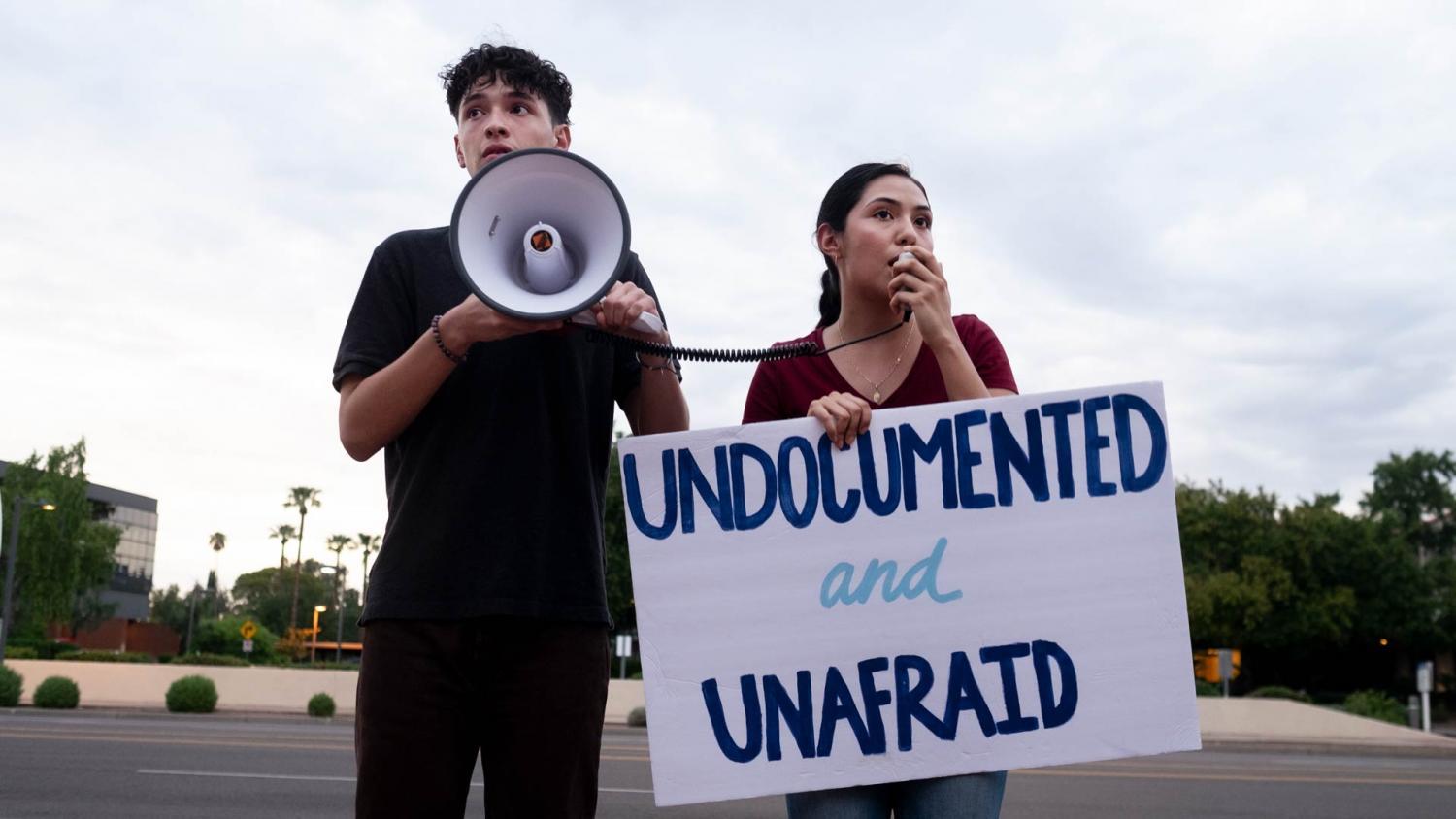 Alisa Reznick/KJZZ
Angel Palazuelos (left) and Maria Garcia have been organizing events at U.S. Sen. Mark Kelly's office together with other Dreamers and ramping up efforts as the 5th U.S. Circuit ruling on DACA draws closer.

Meanwhile, Delich says judges at the 5th U.S. Circuit of Appeals could rule on DACA’s future any day now. Last year, a Texas judge ruled the program was illegally created under the Obama administration. Current recipients have been allowed to keep their statuses and renew, but new applicants are barred from applying.

If the appeals court rules in favor of the lower court, it could end protection for everyone. Delich estimates if DACA is fully rescinded, some 1,000 program recipients could lose work authorization, each business day, and hundreds of thousands of people could be subject to deportation within the next two years.

“And so what we really need is Congress to act not only for the 680,000 current DACA recipients, but also for the roughly 2 and a half million Dreamers that don’t qualify for DACA, young people that were brought here as children,” he said.

DACA was always meant to be temporary. Recipients pay around $500 every two years to re-apply for the status. And it doesn’t provide a pathway to citizenship. That’s why, every week, Palazuelos and other Dreamers head to U.S. Sen. Mark Kelly’s office to ask for what he says is the only real solution — one from Congress.

This past Wednesday on a busy street in north Phoenix, about a dozen people gathered there with signs and a megaphone.

“So now we’re going to go into the office and we’re going to deliver some letters from the community, both impacted individuals and allies, to Senator Mark Kelly,” he said.

Donning a nice shirt and dress pants, Palazuelos and two other organizers walked a stack of handwritten letters to the office’s front desk. They’ve done the same every Wednesday for more than a month.

“So I submitted it late 2020 once it was open for new applicants, and then just last year I was able to get my biometrics, and then because of the decision by the Texas judge, my DACA was basically stopped,” said 19-year-old Phoenix resident Maria Garcia, another organizer and student at ASU.

She says they've been ramping up their efforts here as the court decision gets closer.

“We feel like our deadline is getting closer, we just want to get his attention and he hasn’t responded to anything we have sent him,” she said. “These are actually people, for the longest time Dreamers have been used as political pawns and are just seen as numbers when talking about immigration. But we’re more than that, we’re human beings.” 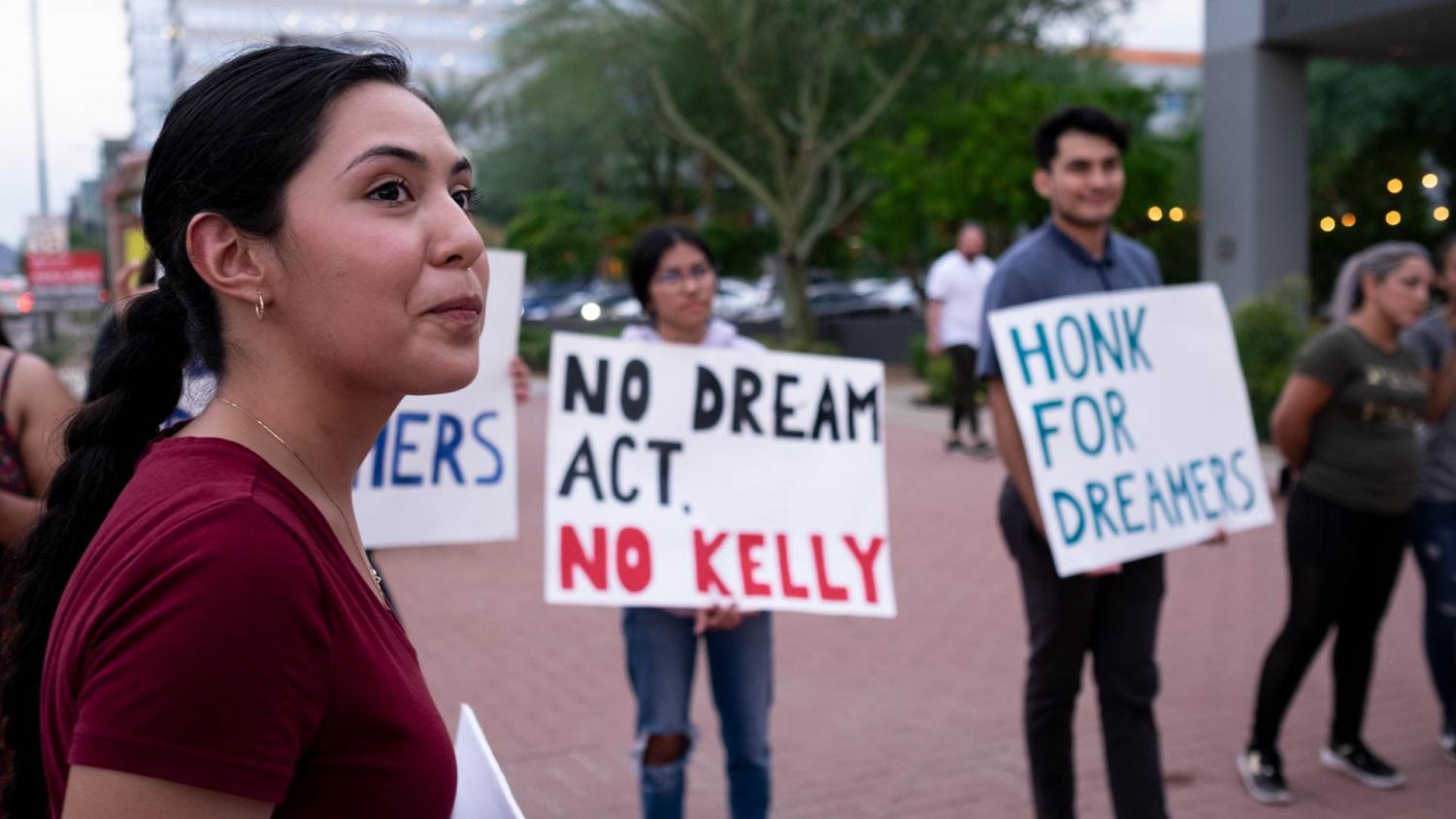 Alisa Reznick/KJZZ
Maria Garcia prepares to speak to a group of fellow Dreamers and supporters outside U.S. Sen. Mark Kelly's office during a weekly demonstration advocating for the Dream Act to be re-introduced.

“That’s what caused the urgency for us because when DACA ends, our community is going to need a permanent solution,” he said.

Palazuelos was a baby 20 years ago, when members of Congress first introduced the Dream Act, a bill that would have provided a pathway to citizenship for he and other Dreamers. No version of the bill has ever passed.

He’s a junior at ASU now, there with the help of private scholarships, including one awarded to just a handful of undocumented students in Arizona each year. He’s studying political science and biomedical engineering, and thinking about law school after that.

His older brother graduated a few years ago from ASU with a degree in mechanical engineering. But without a work permit, Palazuelos says he’s watched his brother struggle to use it.

He says he worries the same might happen to him in a year, when he graduates, but he tries not to think too much about all of that. He thinks students like him just don’t have that luxury.

“We don’t have the capacity to break. We don’t have the luxury to break. I want to achieve all my goals, I can’t be breaking. I have to stay composed. With everything going on, it just feels like the world is on fire. And I’m in the midst of it, just trying to do my homework,” he said.

That’s why, he says, he’ll keep pushing for a solution, week after week, until something changes. 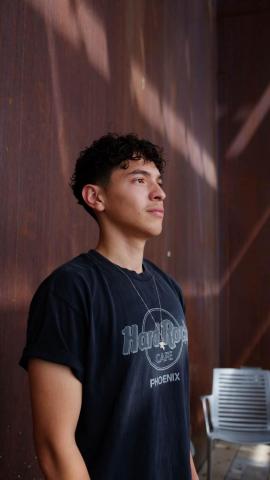 Alisa Reznick/KJZZ
Angel Palazuelos came to Phoenix when he was four years old with his mom and brother. The family settled in Arizona days after the deadline to apply for DACA.
FronterasThe Show